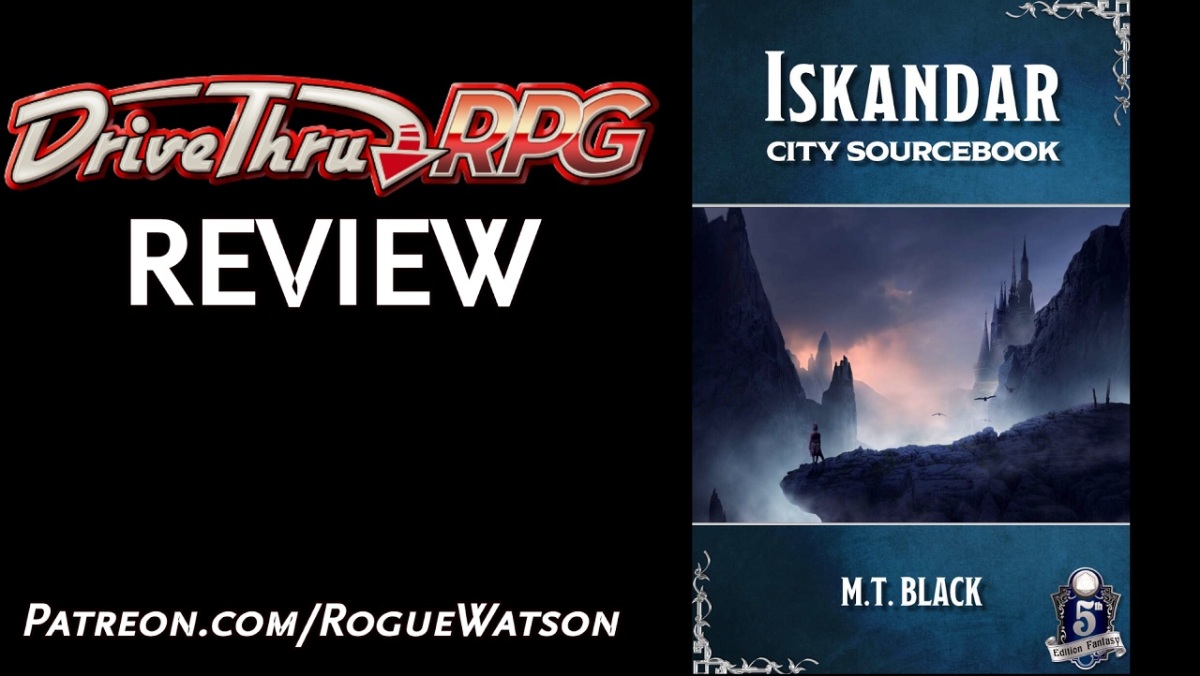 A review copy of “Iskandar City Sourcebook 5e” was provided by the publisher. Find more reviews on my website and YouTube channel.

Iskandar is the homemade fantasy world of one of my favorite 5e content creators, M.T. Black. The world is smartly introduced via its biggest city, in the Iskandar City Sourcebook.

The 100+page sourcebook covers the city’s history, politics, religion, governance, and factions, as well as providing plenty of wonderful d20 and d100 tables for DMs to generate adventures and encounters. The sourcebook also includes the history of the beleaguered city, including its conquest by a neighboring empire, and invasion by demons through a nearby gateway. Yet despite hardship, the city continues to persevere.

Iskandar is a huge city of 60,000 people of diverse races, cultures, and faiths. It’s a modern metropolitan melting pot divided into six districts, from the slums of Old Town to the magical barrier protecting the high-class spellcasters of The Rise.

Each district lists several important locations and prominent NPCS, from the upper-crust Golden Goblet tavern in the Market Square to the Academy of Systematic Wisdom in The Rise. The largest bathhouse in the Southward is run by a kind woman who’s really a devious night hag in disguise. Everyone has a secret to hide or a past to escape, filling the city with a rich amount of drama.

Fleshing out the districts are d20 tables of NPCs and encounters, as well as several adventure hooks.

The encounters are some of the best, most creative urban encounters I’ve ever seen, whether it’s a simple corner musician or street poet, or an escalating brawl between two rival temples. Many could lead to full-blown quests, such as someone committing arson in a warehouse, or a random passerby begging a spellcaster to take them on as an apprentice wizard.

The adventure hooks offer more developed ideas, such as hunting down a werewolf killer (the father of the quest-giving hunter!), or unwittingly helping transport stolen goods, or tracking a stolen book into the underground lair of a wererat and his rat minions.

Even if you don’t have much interest in the world or city itself, there’s a lot of great value in these urban adventures and encounters.

The sourcebook also includes three new character races and three subclasses. The world of Iskandar is thankfully not based on the tiresome Tolkein-fantasy of elves and dwarves, instead using anthropomophic races such as cat-folk (kith), and wolf-folk (vargr), as well as unique doppelgangers called Vatborn.

I find these races a lot more interesting, but unfortunately only three are detailed in this supplement, and we’re not given any example statblocks for NPCs. Hopefully future installments will flesh out the rest of the races.

The three new subclasses are steeped in the history of Iskandar. The Cleric Night Domain worships Shayla, a frequent goddess of the kith. The Night cleric can summon a shadow, see in darkness, and render others unconscious by enveloping them in Devouring Dark. Nice!

Fourth Edition Warlord fans should love the Cinderwood Knight, a Fighter that features many ally-supporting maneuvers.  The Blade Dancer Rogue, based on the House of Blades hostels in Iskandar, looks like a nice improvement over the 5e Duelist.

Sourcebooks aren’t usually my favorite products to look through, as I prefer monsters, adventures, quests, and dungeons to drop into my campaigns. But focusing on a world’s largest city is an excellent way to introduce a new fantasy world, and if nothing else, Iskandar City Sourcebook offers an excellent collection of NPCs, urban encounters, and adventure hooks.

The Verdict: By focusing on a single, albeit huge city, Iskandar City Sourcebook expertly breathes life into this new fantasy world of conquering nations, invading demons, and a bustling city that’s full of adventure and intrigue.

A review copy of “Iskandar City Sourcebook 5e” was provided by the publisher. Find more reviews on my website and YouTube channel.