Like Tasha’s Cauldron of Everything and Xanathar’s Guide to Everything and before it, Drizzt’s Travelogue of Everything is a nearly 100-page, class-focused supplement for D&D 5e, adding dozens of subclasses and magic items, as well as a 14th class in the Tactician.

When I’m reviewing new classes and subclasses, I look at three main elements: 1) does it have an interesting, well-executed theme? 2) does it frontload some cool abilities, or do we have to wait until later levels? and 3) is it distinct from other classes/subclasses or is their too much overlap?

I’m pleased to report that these 30+ subclasses frequently check all three boxes.

Among my favorites is the Mechanic Artificer, who gains a bitchin’ Arcane Ride that grants lots of movement abilities without being too overpowered. At 6th level they can empower their ride with sweet customizations such as climbing speed, shields, missiles, and “spellnitro.” Yes!

The Barbarian Path of the Avalanche uses their own Momentum resource, generated by raging, moving, and taking damage, and using it to activate spiffy Momentum Powers.

Shout-out to the Barbarian Path of Revelry for reminding me of our own halfling barbarian Fray in our Rime of the Frostmaiden campaign — gleefully raging and taunting their enemies.

The Druid Circle of the Streets is a hilarious concept with an equally hilarious signature ability: using Wild Shape to transform into animate objects. A trash can? A chair? At higher levels they can unlock Large and Huge transformations. I would relish the chance to punch enemies as an armoire!

There’s a Warlock who uses a Tarokka deck to gain their abilities each long rest, a Wizard who can select different planar weavings to enhance their abilities, and a Fighter who can commune with nature to receive the blessings of animals. And how about the understated Monk Way of Redirection, leaping around, disarming opponents, and using the environment to defeat their enemies? The quintessential Jackie Chan martial artist works so well it should’ve been part of the baseline Monk! 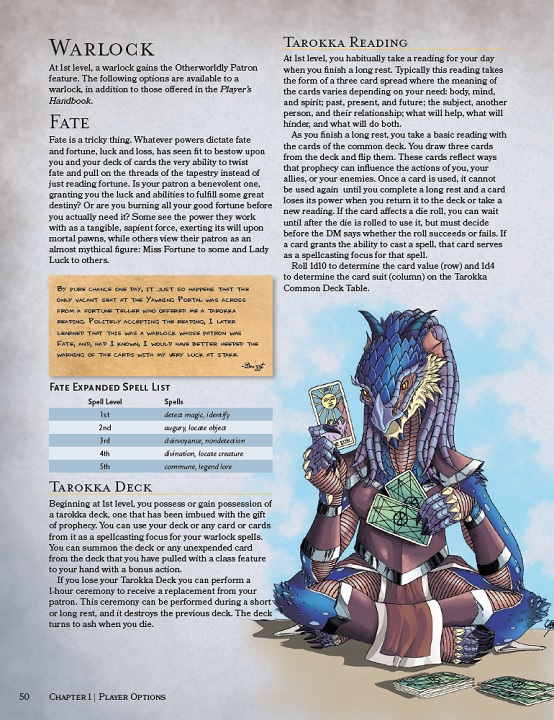 Perfect Plan is a mixture of the Artificer’s Flash of Genius, a Bard’s Bardic Inspiration, and the Bless spell, using the Tactician’s reaction to grant a d4 bonus using their Perfect Plan die. At 2nd level the Tactician can Analyze an opponent with a bonus action, unlock the PP die for damage, and discovering an enemy’s weakness.

Later abilities enhance those two features, borrowing from some of the different Bard colleges in how Bardic Inspiration can be used, and even allowing the Tactician a second reaction to use their die multiple times in a single round.

Admittedly, I didn’t find the Tactician very interesting. They’re a pure support character, and it’s not a playstyle I typically gravitate toward. In many ways it feels like a Bard without the spellcasting. The subclasses (including the typical Fighter-like and Wizard-like) don’t really change my opinion. But it’s a well-designed class for what it’s trying to do, and feels very balanced.

The new subclasses take up most of the supplement, but don’t sleep on the other two chapters.

Over 50 magic items are crammed into chapter two, and they are an absolute delight. A magic cookie tin that summons ghosts, a spear that grows a tree to leap off of, a bow that shoots an arrow that acts as a drone — even a fully pilotable beholder tank. Take that, Kwalish!

The final chapter adds several pages of helpful expanded rules, advice, and explanations for DMs on topics that probably come up quite a bit in an average session, such as domesticating animals, shopping for magic items, and generating random NPCs.

Modeling a supplement after two of the most popular and well-received official 5e books can be daunting, but Drizzt’s Travelogue of Everything is easily deserving of the “Everything” tag, adding a ton of content that DMs and Players should enjoy.

The Verdict: Move over TAsha — With dozens of subclasses,  magic items, and a new class, Drizzt’s Travelogue of Everything is more than worthy to carry the infamous drow’s name.

A review copy of “Drizzt’s Travelogue of Everything” was provided by the publisher. Find more DMs Guild Reviews on my website and YouTube channel.