Having arrived at the Jarlmoot, an ancient meeting place for frost giant leaders, the party discovers the ring of thrones also serves as an arena. They’ll have to prove their combat prowess before the ghosts of frost giant jarls to proceed.

The giant is shocked to see a non-giant at the Jarlmoot — and Fray the halfling is about as far as you can get from a giant! But he respects the axe she wields and gives her the usual rundown: they must pass a series of trials to receive a reward: strength of body, and strength of mind.

He warns that no one will be able to leave this arena once it starts, then begins counting down. Valravn had worriedly came in after her, and now she hurriedly ushers him back out, anxious about what’s to come.

He runs out of the circle just as a magical blizzard descends around it, slicing into him as he stumbles out, leaving Fray cut-off from the others.

Inside the arena, three of the ghostly giants mumble some words and summon their champions: three frost giant skeletons!

At initiative 20 a Lair action is introduced: one of the ghostly giants locks eyes with a PC, forcing them to make a CON save against their Freezing Stare, dealing a hefty amount of cold damage. Fortunately for the PCs, they make the save against taking full damage and paralyzation every time, until the last time.

While Fray rages and begins tanking, still with her troll regen active, the rest of the party are left to rush in and help.

Thimbleweed throws his elemental gem, summoning a mighty Earth Elemental that probably should’ve earned the MVPC this session with the amount of damage it puts out.

Valravn teleports Thimbleweed inside, while the others rush in through the slicing blizzard (Edmond atop his summoned saber-tooth tiger!), taking damage before they even reach the arena.

On round 2 another frost giant skeleton is summoned, along with two winter wolf spirits (Wolf Spirit Swarm from Tome of Beasts), and on round three the final ghost giant summons his faithful mount: a woolly mammoth zombie! 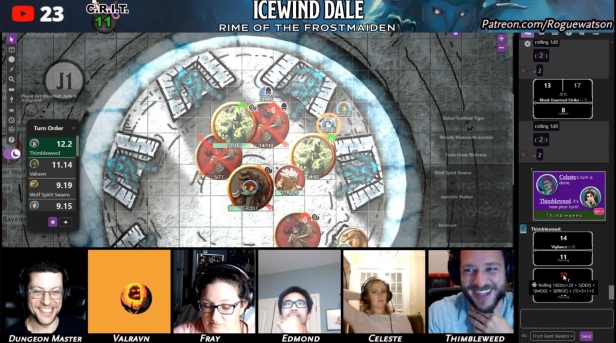 What follows is a brutally long, close quarters battle as the marshals pull out all their special abilities and items. Edmond fires off his powerful arm cannon, and pulls off several fun pounce attacks while riding his feline mount.

Valravn uses his gem of brightness, followed by a frustratingly effective Slow spell (ARGH!) to critically debuff the enemies.

Fray starts throwing dynamite like it’s candy at a parade. And Celeste and the Earth Elemental delight in the skeletons’ bludgeoning vulnerability.

The skeletons hit hard but the Slow negates a lot of damage. The wolf spirits do a good job frightening their enemies but can’t hit worth shit (ARGH again). And the poor mammoth zombie gets a single round before it’s killed by a combination of AOE attacks and the earth elemental’s devastating punches (Sigh).

Despite frequent attempts, the enemies are never able to break the concentration of Thimbleweed (earth elemental) or Valravn (Slow spell).

Eventually only the wolf spirits remain thanks to their damage resistance and this mostly martial-party.

During the final round of clean-up, the fates choose Thimbleweed to be the target of the ghosts’ Freezing Stare. He fails the save, rendering him paralyzed, which instantly turns off his concentration for the earth elemental. Ruh-roh!

The final wolf spirit goes down, and one by one the ghostly frost giant jarls blink out, until only the speaker remains. He congratulates them on passing the first trial. Then he disappears as his chair raises up, revealing a set of stairs plunging underground.

However, with Thimbleweed paralyzed, their mighty earth elemental ally has been let loose and is now on a rampage. They’ll have to deal with it before they can continue below — and they only have an hour before the vault is sealed!

One thought on “Icewind Dale: Rime of the Frostmaiden Session 48 Recap”