Pick up where Verse I left off by delving into the demon-infested temple of Orcus in the conclusion to this pixelated Tier 1 adventure.

A review copy of “The Heir of Orcus: Verse II” was provided by the publisher. Find more DMs Guild Reviews on my website and YouTube channel.

“The Heir of Orcus: Verse II” picks up right where the first one left off, with our heroes entering the Temple of Orcus to recover a fallen angel. It’s a direct continuation of the Tier 1 adventure designed for a 3rd level party, featuring plenty of demon battles amid a straightforward dungeon crawl.

It’s a bit shorter and simpler than Verse I and is made up entirely of the three-room temple dungeon, though like the first one the included art assets and attention to detail for each area are top-notch.

Hopefully you’ve already read through Verse I, as Verse II is less a sequel and more a Part 2 of 2. Ironically it’s a bit easier to slot in Verse II as a stand-alone to an existing campaign than Verse I, simply by removing or changing the party allied NPCs.

Verse I ended with the party approaching the Temple of Orcus, and Verse II reveals the temple itself. I was disappointed in how short and linear it was, consisting of only three rooms organized into four areas.

Despite its diminutive size, there’s a lot of interesting environmental hazards and enemies packed within. The entrance features a bridge over lava and a variety of hostile demons and undead, including flying shadows, a small army of dretches and manes, and a funny cameo from a certain video game series via a ghoul wearing green space armor.

Inside the temple you’ll find a vat of black ooze that shouldn’t be touched, though clever PCs could attack it to spill its contents onto more encroaching demons. Bowls of blood can be consumed to heal, but also age our heroes. And a rows of Skulls can have a variety of wild magic-style effects ranging from silly to catastrophic with their own d100 table.

The inner sanctum holds a fun twist. The fallen angel, Ser Vindictus, has been killed via a burrowing worm and transformed into a Spawn of Kyruss (from Volo’s Guide to Monsters). It resides inside a sarcophagus, and attacks anyone who frees it. The titular Heir of Orcus, a cambion, has used her Alter Self ability to appear as Ser Vindictus. She’s currently chained to an altar with magical shackles that prevent her escape, and implores the heroes to save her.

This is a fun set-up, and very thematically appropriate to a demon lair. The only catch will be if the PCs suss out the truth, the Cambion will be effectively neutered and a very easy kill if she fails with her Fiendish Charm ability. 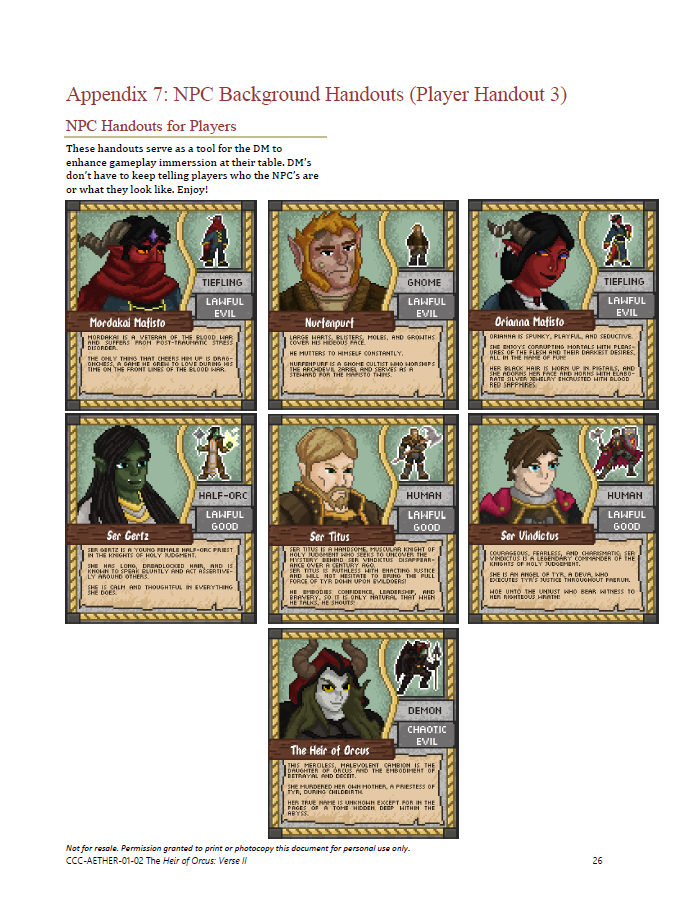 I’m not sure how well balanced everything is considering the PCs most likely have several powerful NPC allies in tow. If they sided with the knights in Verse I they have either a knight and a priest or two sword wraith warriors (if the knights died in Verse I), or a pair of CR 4 succubus/Incubus demons if they chose to work for Zariel.

There are notes for adjusting encounters for stronger parties, and I would make those adjustments if these NPCs are helping the party. Or better yet, have the enemy NPCs show up at the end to take on the allied NPCs.

My chief complaint with Verse II is similar to Verse I – they should not have been broken up into two separate DMs Guild products. Verse I is incomplete without Verse II, and Verse II is very short on its own. Together they make for an excellent Tier 1 adventure, however, thanks to the memorable pixel art style and solid writing and dungeon design.

The Verdict: While its dungeon is disappointingly short “The Heir of Orcus: Verse II” continues the detailed designs and excellent pixel art, making for a satisfying ending to the adventure.

A review copy of “The Heir of Orcus: Verse II” was provided by the publisher. Find more DMs Guild Reviews on my website and YouTube channel.