A review copy of “Call from the Deep” was provided by the publisher. Find more DMs Guild Reviews on my website and YouTube channel.

Most products I review on the DMs Guild are smaller in scope, such as drop-in dungeons, one-shot adventures, and all matter of new subclasses, magic items, and other player character supplements.

At the other end of the pool is “Call from the Deep,” a full 270-page campaign that could easily rival any of the officially published Dungeons & Dragons Fifth Edition adventures. “Call from the Deep” smartly combines many of the best elements of those adventures while infusing its own fun swashbuckling pirate themes with a dose of Lovecraftian horror, creating one of the most complete and desirable campaigns I’ve ever seen.

Chapter One begins with the players investigating a mysterious crashed ship across the Sea of Swords in the island town of Gundarlun. I like the hook that the PCs are going to investigate with the Lord’s Alliance to the small mountainous island, using the classic trope of federal law enforcement journeying to a small town to uncover a dark secret.

Since this is D&D, the journey itself is drought with peril. “Call from the Deep” uses the random encounter rules drawn from Tomb of Annihilation, featuring over 50 random encounters in 12 pages, most of which are far more detailed than just “random monster attacks.”

These encounters, plus a classic pirate attack from a fun recurring tiefling pirate encounter, should bring the PCs up to level 3. “Call from the Deep” uses the milestone XP system, which I’ve grown to love and appreciate when telling a structured story.

Gundarlun’s towns, denizens, and dungeons take up the bulk of Chapter One, including a were-shark bartender, a sea hag with a quite literal pet sea lion, a submerged shipwreck as an underwater sahuagin lair, and the awesome though small crashed illithid vessel that serves as excellent foreshadowing to the overarching plot.

At the end of the sahuagin lair in Chapter One the PCs discover a map teasing a series of major pirate attacks on several prominent cities along the Sword Coast: Baldur’s Gate, Neverwinter, and Waterdeep. Chapter Two is all about defending these cities, with the DM choosing which to run (or all of them).

The city defenses may be inspired from Storm King’s Thunder but with a distinct Pirates of the Caribbean flavoring. PCs can be much more proactive against pirates than giants. It helps that each city is thoroughly detailed, including many NPCs to chat with and several side quests to undertake attack the attacks transpire.

The attacks themselves are exciting, with small fleets of pirates causing mass chaos as they attack with ballistas and pirates touch down in the streets. Running a full blown city siege can be daunting for any DM, but the designer smartly condenses the attacks into dungeon crawls with specific goals. For example, the undead pirates that assault Neverwinter attack House of Knowledge in order to slay the resident aboleth, hoping to eliminate a potential threat.

I love the pick and choose nature of Chapter Two, from whichever city attack sounds the most interesting to the large variety of NPCs and quests (or just use ’em all). Side Quests may not be the proper term, as all of them are plot-relevant and many serve as important follow-ups for the PCs to discover the link between the pirates and the Kraken Society, and ultimately the illithids behind it all.

Chapter Three provides a 49-page montage of locations around the Sword Coast and the Sea of Swords, which has become a common element in less linear Fifth Edition adventures, such as Storm King’s Thunder and Tomb of Annihilation. The PCs will be doing a lot travel from the quests they gain in Chapter Two. Chapter Three provides ample information for DMs to draw the world around them, including a pirate wedding at a lawless port town and entire dungeon crawls such as an abandoned merfolk city that serves as a vampire lair.

Chapter Four details the most excellent pirate captain lords, including the tentacled Sea King Tentrix, the sahuagin baron Dhurge and his love of wands, and the one eyed spirit naga Desecratus. The PCs will encounter all of these foes as they track down the pirate lair in Driftwood Docks, including an epic battle with a colossal octopus, and luring an ogre zombie in a submerged tank to various pressure plates to open doors. 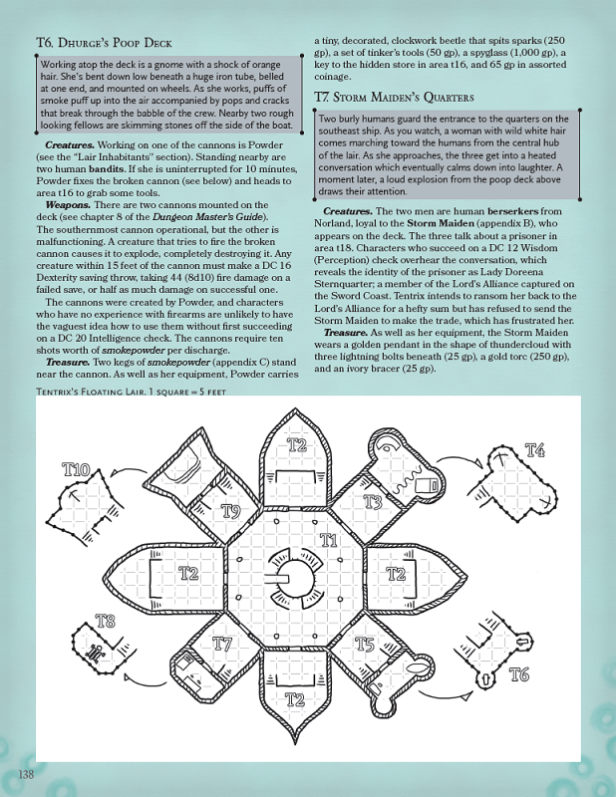 With the pirate motif more or less complete, the latter half of Chapter Four goes pure Lovecraftian as the PCs track down the now illithid-controlled Kraken Slarkrethel. Madness and horror are commonplace in the Purple Rocks island region, granting many opportunities for terrifying occurrences to resist, or gain permanent new Flaws (ouch!).

Chapter Five details the finale in Slarkrethel’s lair of Ascarle, a 10th level, partially submerged underwater city of elven ruins and illithid domes. Ascarle is breathtakingly massive, encompassing 27 pages and 89 rooms filled with exotic alien creatures, secret doors, and devious traps. It’s one of the grandest, most intriguing dungeon designs I’ve ever seen this side of the Tomb of Annihilation, and represents a suitably epic climax to an incredible adventure.

The Verdict: With over 250 pages of well-written swashbuckling, dungeon-delving, town-saving adventure throughout the Sea of Swords and the Sword Coast, “Call from the Deep” Easily stands shoulder-to-shoulder with the officially published Fifth Edition Adventures.

A review copy of “Call from the Deep” was provided by the publisher. Find more DMs Guild Reviews on my website and YouTube channel.

2 thoughts on “DMs Guild Review – Call from the Deep”