Delve into ancient ruins of a precursor race in this single session level 4 adventure. 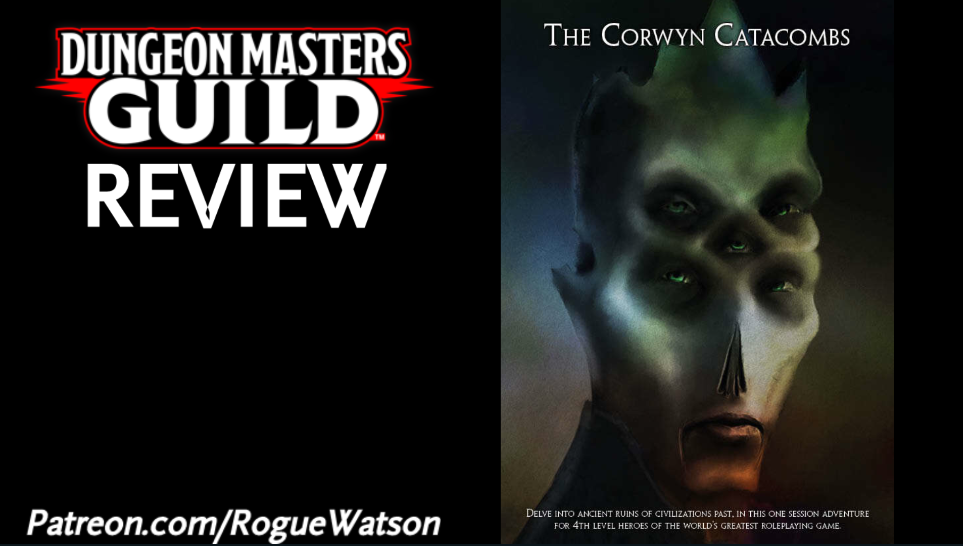 A review copy of “The Corwyn Catacombs” was provided by the publisher. Find more DMs Guild Reviews on my website and YouTube channel.

The Corwyn Catacombs promises an intriguing dungeon delve into the ruins of an ancient civilization belonging to a precursor race, but mostly amounts to smacking around some goblins.

Despite the letdown, the self-contained adventure is well-written, and squeezes a good balance of role-playing, exploration, and combat into the tiny, linear dungeon.

The adventure takes place in its own setting, though the village of Corwyn could easily be replaced with whatever town you need. The village is impressively detailed, and give a full two pages of locations and NPCs, each with their own personalities and motivations.

The mission is to rescue the cartwright’s son, who recently disappeared around the entrance to a nearby dungeon. Parents – don’t let your kids play near dungeons! The mayor is also offering a reward for anyone who can take out the goblins that have recently moved into the dungeon ruins.

There are no encounters or complications reaching the catacombs. The goblin tribe camps out right inside the entrance, and can be fought or reasoned with. A dark twist to the encounter is discovering a small goblin baby in a nearby room, an interesting method of shaming some righteous goblin slayers, or at least making them think twice. 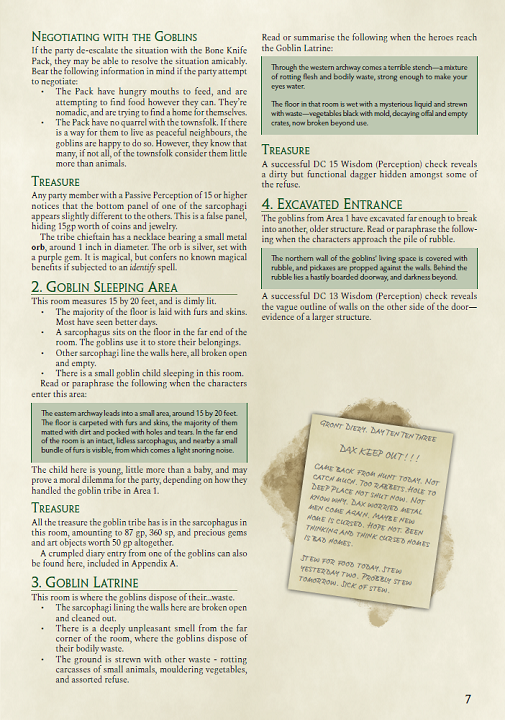 Beyond the goblin tribe lies the ruins, which are only a handful of rooms. A puzzle door to a tiny treasure closet is a fun diversion, but the only real threat are a trio of custom constructs called Chrian Servitors, a mix between Animated Armor and Wraiths. The bodies of a previous adventuring party can be found, but mostly serve as the only other source of treasure in the dungeon.

The rescued teen holds one orb-key, and with the bugbear chieftan’s necklace, the party can use both orbs to open the way to the final boss – which is entirely optional since their only tasks were to clear the goblins and rescue the kid.

The Chiran is a five-eyed, alien-looking humanoid, but is basically just a mid-level mage. As a solo spellcaster he’s not going to last long – give the poor dude some skeletons or something. As a reward the PCs can claim his Arcus Stone, a revamped Ioun Stone that appears to be part of a set, but is exceptionally underwhelming by itself, and a poor reward for taking on an optional boss fight.

As much as I’m complaining about the dungeon’s structure and content, I did love the layout and organization. The descriptive text is properly evocative without being too long-winded, and every room and NPC description is organized into easy-to-read bullet points.

I particularly enjoyed the details of the village and the goblin tribe, including fun player handouts. Unfortunately we’re not provided with a separate player map for the dungeon, and the grid map is literally just that, a bunch of plain grids, a big disappointment for an adventure that centers entirely around a dungeon.

The Verdict: The Corwyn Catacombs is a simple but solid self-contained mini-adventure that’s easily slotted as a side quest into any low-level campaign.

A review copy of “The Corwyn Catacombs” was provided by the publisher. Find more DMs Guild Reviews on my website and YouTube channel.