An AL-style mini adventure involving kidnapping goblins, stageshow plays, and a new villain that kicks off a trilogy. 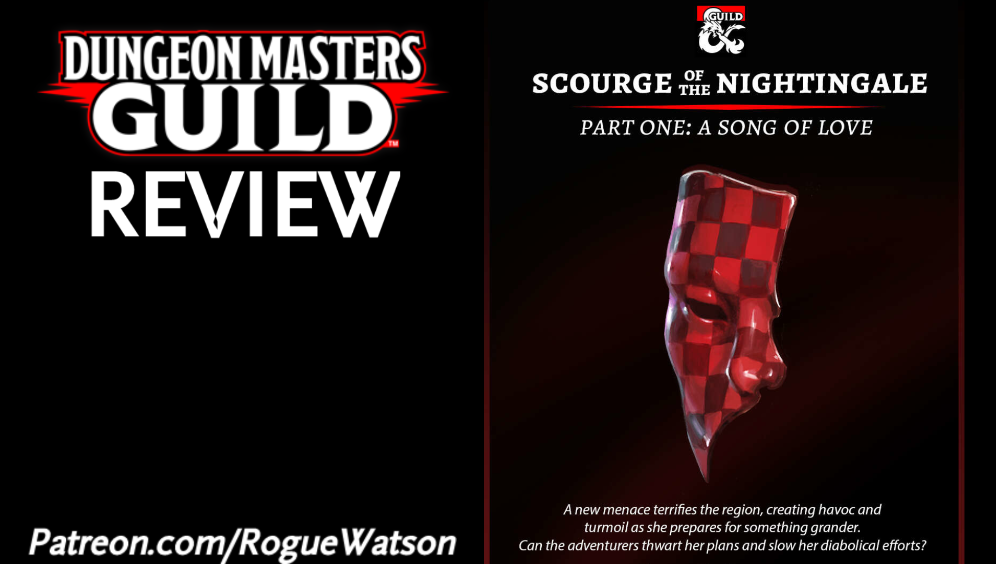 A review copy of “Scourge of the Nightingale Part 1: A Song of Love” was provided by the publisher. Find more DMs Guild Reviews on my website and YouTube channel.

One of my favorite recent fantasy series is the Gentleman Bastards series by Scott Lynch. The third book, The Republic of Thieves, includes an extended backstory with our group of rogues posing as theater performers in order to scam their patron.

A Song of Love, Part 1 of the Scourge of the Nightingale Trilogy, doesn’t quite take it that far, but does feature a fun in-universe play for players to perform in order to infiltrate a fort full of goblins.

A Song of Love is designed like an Adventurer’s League module, which means it’s compact, rigidly structured, and well-organized. It’s also weirdly designed for a wide range of levels, 1 – 10. That’s way too much when we’re dealing with goblin kidnappings. The higher range of levels uses crazy goblin statblocks like goblins wearing plate armor (w/ 18 AC!) and goblins with 5th level spells.

While I do like level scaling and notes for adjusting encounters, A Song of Love seems to work best for tier 1 (levels 1-4) parties. I don’t want to still be dealing deal with goblins at level 8!

Aside from that bit of weirdness the adventure is very solid. The action begins when the party journeys to a town to witness a wedding, only to meet one of the grooms on the road battling a goblin. He explains that his husband-to-be has been kidnapped by goblins, and he needs to deliver the ransom.

The ransom delivery takes place at a really cool location: a gigantic tree with multiple platforms at different elevations, and connecting to a nearby cliff via a bridge – with DM and player maps! There’s ziplines and pullies to get around, and all the goblins are in place with bows at the ready. They demand more money and magic items, and the entire sequence devolves into an epic combat encounter. 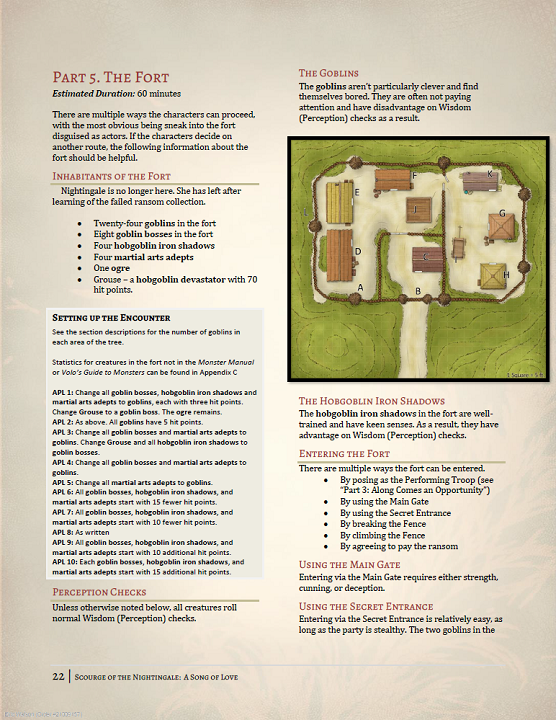 The party can then follow the tracks that lead to a fort full of goblins and witness the only appearance of the villainous Nightingale in a brief cutscene. They can knock down the front door (guarded by an ogre), climb over a fence, locate a secret entrance, or use the solution that’s soon provided for them – a traveling group of entertainers showing up for a scheduled performance.

Goblins would be the last creatures I would expect to enjoy order a live play, but the troupe is performing Rescue of the Fair Goblin Maiden, which the designer has written out in several pages. Handing out scripts and letting your players run wild is a fantastic role-playing opportunity, though I believe the idea is for some players to act, and others to snoop around.

Either way the action should end in a boss battle as the party frees the prisoner and fights off the goblin boss, hopefully discovering the note left by Nightingale that teases her further machinations. I’d wished we’d gotten a bit more from her to properly motivate the party to stick around for the rest of the story, but I’m glad Part One still manages to tell a complete story.

Part 2: A Song of Revenge and Part 3: A Song of War are also available on the DMs Guild.

The Verdict: Although only part 1 of the larger Nightingale Trilogy, A song of Love tells a complete mini-adventure with fun encounters and a delightfully written play.

A review copy of “Scourge of the Nightingale Part 1: A Song of Love” was provided by the publisher. Find more DMs Guild Reviews on my website and YouTube channel.