A multi-level dungeon crawl through ooze-filled sewers and mines for Tier 2. 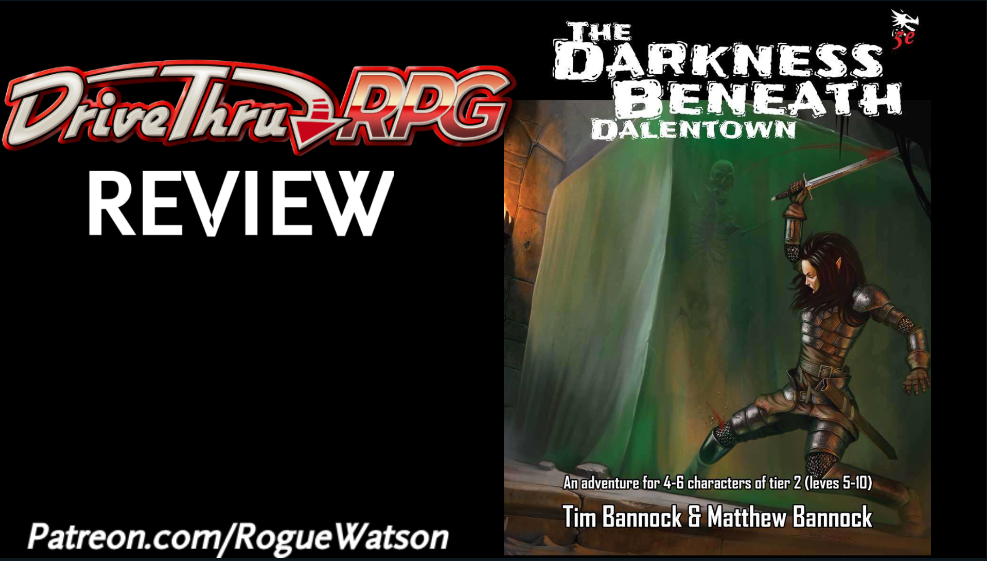 A review copy of “The Darkness Beneath Dalentown” was provided by the publisher. Find more reviews on my website and YouTube channel.

The Darkness Beneath Dalentown isn’t the first ooze-themed dungeon crawl I’ve reviewed, and probably won’t be the last. The multi-level dungeon features beautiful full color battle maps from Elven Tower, but the combat-heavy adventure leads a lot to be desired.

The beginning doesn’t include any standard adventure hooks, nor quest-giving NPCs. The party is expected to in Dalentown where a series of slime-related threats emerge from the depths. Nobody tells the heroes anything or offers a reward; the PCs are just expected to investigate the situation in the sewers, which leads to an ancient dwarven stronghold and crystal mine.

It’s a combat-heavy start for a multi-level dungeon crawl that’s almost nothing but room-to-room combat encounters. A group of ratfolk trying to survive against the ooze incursions are a missed opportunity for some much-need role-playing and social encounters.

The battle maps are fantastic – Elven Tower does great work and I dig the art style, but there’s not much of interest in any of the levels except for new varieties of oozes, jellies, and slimes. The designers include over 20 new monster statblocks, a nice change from the usual Black Puddings and Ochre Jellies.

I like the concept of delving deeper into a dungeon with increasingly interesting biomes. The sewers give way to a dwarven hold, which features a magical library and clockwork guardian, and then on to the underground waterworks, and finally a mine, though I was a bit confused on how certain levels connected together. 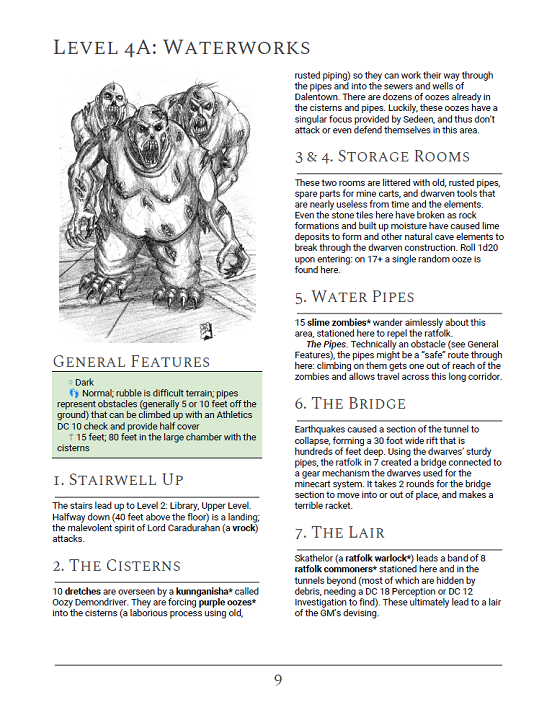 The minimal information throughout the adventure can best be summarized with the final boss. Sedeen tried to use oozes to tunnel through the mine long ago. Things went wrong and she was turned into an ooze demon, now bent on revenge.

The sole bit of personality throughout the entire dungeon crawl is injected via insults and threats she can make through the oozes, but when the party finally reaches her location on level four, there’s zero scenes of dialogue or tactics, or anything.

She also doesn’t have any minions – don’t leave your bosses alone, even if they have legendary actions!

The adventure lacks any kind of conclusion or epilogue, making the product feel unfinished. The plain white background and font doesn’t help either, though I did appreciate having multiple page formatting options. The Darkness Beneath Dalentown is a sobering reminder that having great battlemaps doesn’t automatically result in a great adventure.

The Verdict: The Darkness Beneath Dalentown provides the seeds of a slime-filled, multi-dungeon crawl but suffers from minimal information and an over-reliance on combat.

A review copy of “The Darkness Beneath Dalentown” was provided by the publisher. Find more reviews on my website and YouTube channel.