After chasing Yakka the cursed skull halfway through the dungeon last session, the party found themselves in a watery hallway. From there they explored the entire northeast side of level three, including rotating crawlways, shadow-horrors, and a coded tile floor.

Of all our sessions in the Tomb of the Nine Gods, Session 77 may have been our most by-the-book experience yet. The third level of the mega-dungeon is filled with interesting puzzles and horrific traps that have nothing to do with combat – a welcome reprieve!

The Reflected Hall utilized the first clue of Acererak’s third level warning, “Walk through water with weapon in hand.” A variety of mundane weapons hung on painted walls. The solution is to use the tridents only, anything else would cause a cascading waterfall to surge through the hallway,  as Mannix found out when he stepped through with a mace.

But the solution is a bit arbitrary, other than realizing that tridents are typically tied to water. The solution the party found was to enter the waterfall carrying the weapons in the same order as the painted mural figures – a solution that I found far more satisfying, and changed on the fly.

With detect magic and the bandana of truesight, George and Mannix easily found the hidden alcoves along both ends of the hallway, which held two crystal eyes. Using a video game-like quest log system to track the eyes (and the skeleton keys) informs the players that these items are important, without necessarily revealing why.

A crawlspace in the north end of the hall led to a tunnel. Khaless triggered the pressure plate in the middle, rotating her into a blocked tunnel while a new tunnel appeared in its place, this one with the body of a skeletal dragonborn. 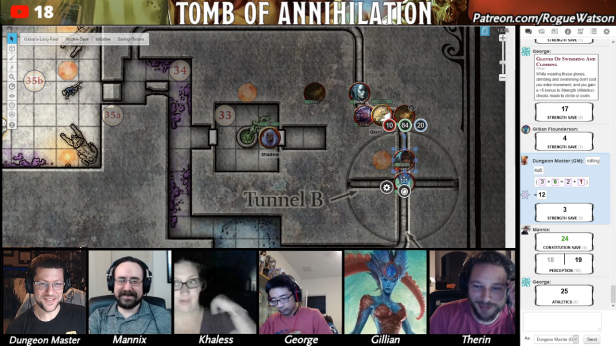 The party spent a good chunk of time working out the details of this particular trap. The tunnel rotated any time enough weight pressed on the middle section of the open tunnel – someone would always be stuck. Every single party member crawled through the tunnel, including Mannix’s giant frog.

But Mannix didn’t want to leave his giant frog statuette behind. He planned on using a scroll to cast Wall of Water to push the pressure plate down, which would also cause a large amount of water to rapidly fill their small crawlspace area. It was a solid idea but Therin had a much more elegant solution – the Create Water spell created merely 10 gallons, more than enough to push the pressure plate without creating a hilariously dangerous water slide.

The north end of the crawlspace led back around to a northwestern hallway, where Orvex, the only one not to enter the small tunnel, greeted them again. Had anyone gone up the hallway they would’ve seen the crawlspace was basically just a loop, which was a funny reveal. Though the dragonborn body (one of the Company of the Yellow Banner) had a +1 sword and one of the crystal eyes, making the excursion anything but a waste.

George opened a nearby door to see a shadowy duplicate of himself, with his back turned, about 15 feet in front of him in the middle of a room dominated by a stone font with an illusory green liquid. The clue was “Slake your thirst at the font.” After my players looked up what “slake” meant (lol), George slurped up the shadowy liquid and found another crystal eye at the bottom, nailing this fun little puzzle room with no problem.

I’Jin’s Tomb lie to the west, beyond a giant stone block. Mannix found the magnifying peephole that revealed the hieroglyph code hidden in a dial on the block. He instructed Khaless to push a nearby button, opening the way into a large tiled room, a more expansive version of I’Jin’s shrine in Omu.

As long as the party enters from this side and someone looks through the peephole, the puzzle room is completely spelled out, which is slightly disappointing. I would’ve preferred some sort of riddle or story rather than just showing the correct sequence to the peephole viewer. It also mentions that the viewer can telepathically communicate with the person stepping on the tiles, which is just lame. At least give the party a little challenge!

I nixed the telepathic thing. Mannix used his owl familiar to fly up into the devil face on level two, and down into the tiled tomb to relay the information to Khaless, which was a nice solution. The tension remained high as she went step-by-step, with a few choices she had to make due to duplicate tiles nearby.

She made it to the sarcophagus, and claimed I’Jin’s horn, a Wand of Wonder, which my wife cooed about throughout the rest of the session (her favorite character, Bryseis, is a wild magic sorcerer), as well as I’Jin’s spirit which boosted her DEX to 23. Impressive, but her DEX was already a 20!

Therin dragged the body of a poor dwarven skeleton who had not followed the correct sequence, claiming some gem-studded loot and another crystal eye, bringing their total up to five (for those of you who have read ToA, I’m changing a few things here and there).

The party hadn’t taken any real damage for the entire session other than a bit of bashing from the initial waterfall failure, but their hit points were still severely low from the tomb guardian battles in the previous session. They opted to short rest in the shadow fountain room.

Everyone climbed inside, with Mannix opening the door and triggering the shadow. On a whim they decided no one had seen the front of the ghost, and were curious. Mannix stepped up and turned around, revealing a horrifying visage on his double. Everyone else in the room had to make a DC 15 WIS save – and every single one of them succeeded, causing jokes to fly about how hardened they were and how seeing Mannix in horrifying pain was nothing new.

Slightly rejuvenated the party walked back through the Reflected Hall following the weapon-warrior order and headed back toward the grand staircase. Along the way they noticed another crawlspace in the southwest, and it’s there we’ll return next week!

One thought on “Tomb of Annihilation Session 77 Recap”