Uncover a sinister plot by the underworld Darakhul Imperium in the fantasy world of Midgard in this level 1-12 campaign for DnD 5e.

The ghoul kingdom rules vast stretches of the Underworld region of Midgard, but lately  the sentient flesh-eaters have been making significant power-plays onto the surface world.

Empire of the Ghouls takes players to the underbelly of the free city of Zobeck, the frosty tundra of Huldramose, and the desert necropolis of Siwal before venturing into the underground darakhoul city of Vendekhul to thwart a nefarious plot in a DnD 5e campaign that spans levels 1-12.

The following content is included in the Empire of the Ghouls – Complete Bundle ($59.99):

Don’t judge a Tabletop RPG campaign by its cover – or its title. Although the ultimate big bad of the campaign does involve the Ghoul Imperium – Midgard’s unique and interesting nation of undead yet intelligent ghouls, much of the individual adventures are more concerned with running around Midgard exploring exotic locations.

The campaign is made up of six linear chapters, each of which contains an adventure with a proper beginning, middle, and end. If you’ve played any of Paizo’s Adventure Paths for Pathfinder or Starfinder, you’ll free right at home. The advantage are compelling mini-adventures with plenty of localized boss fights, at the cost of a linear adventure that continues along a strict path.

The most startling aspect of the campaign is that most of it doesn’t actually take place underground. The players won’t reach the Underworld until Chapter Five (10th level) and the actual Ghoul nation politics and setting, which is the entire focus of the included Underworld Gazetteer, aren’t really explored until the final chapter.

Empire of the Ghouls is instead a tour de force of Kobold Press’ fantasy setting of Midgard, which is thematically and tonally similar to the Forgotten Realms. Each chapter takes place in a new location as you hunt down artifacts to help defeat the ghoul threat, or in one chapter, violently interrupt an unholy marriage alliance between vampire and ghoul!

In Chapter Two the players are tasked with retrieving a holy artifact to help against the recent ghoul incursions on the surface. The journey takes them north into the vampire-occupied kingdom of Krakovar, and includes escorting a deposed noble, and sneaking into a castle filled with undead Ghost Knights.

In Chapter Three the party journeys further still, to the northern lands of the Amazon-like shieldmaidens of Huldramose, where they take part in an extensive feast to curry favor and gain allies, and track down an unholy marriage between vampire and ghoul hierarchy in a dead city.

Chapter Four trades the frosty setting for a desert necropolis, as the party ventures to the city of Siwal to defeat the recently disturbed Ghul King in the catacombs beneath, and gain a magic book that allows the party to travel amongst ghoulkind without detection.

Armed with the Book of the Dead, the party finally enters the Underworld in Chapter Five, hoping to rescue the kidnapped archduke. During their trials they acquire the alliance of an unlikely ally: a former ghoul king, and no friend to the current empire.

In Chapter Six the party discovers the ghoul threat lies not with the emperor, but with the seditious ruler of Vandekhul and the scheming high priest. The party carefully navigates the ghoul city, making allies, getting into trouble, and ultimately saving the archduke from being transformed into a darakhul.

The campaign includes over a dozen battle full color battle maps, including the undead castle Orzelbirg, a seaside cave full of cannibal dwarves, and an underground dragon graveyard, and they all look fantastic on Roll20.

Less fantastic is the token art. The original Kobold Press monsters, like the darakhul and ghoulsteed, look great. But Kobold Press is using the Open Gaming License (OGL), which prevents the use of official monster art (as well as WotC characters and settings).

Purchasing this module doesn’t include the token art of generic monsters from the 5e Monster Manual, such as giant bats, derro, otyugh, and even a simple skeleton.

In the past when character art wasn’t available, Roll20 used a blank token with the name, which looked terrible. To their credit, they now supply a generic symbol, presumably a ghoul. Unfortunately there’s quite a few monsters from the Monster Manual included here that use that same art, particularly in the lower levels. If you own the MM on Roll20 it’s a semi-easy workaround to drag them from the Compendium. Otherwise it’s a bad look to use so many generic tokens, and an annoying reminder that this isn’t an official Wizards adventure.

Empire of the Ghouls also lacks a lot of artwork that I’ve come to expect from 5e adventures. Environmental art, monster art; any handout that I can show my players to immerse them into the scene, location, or situation. There’s exactly one piece of art for each chapter, then a smattering of written handouts. Disappointing.

If you just purchase the  Empire of the Ghouls module, you’ll have everything you need to run the full campaign. Roll20 also has the Underworld Player’s Guide and Underworld Lairs as part of the Complete Bundle (you can also purchase the Lairs separately). 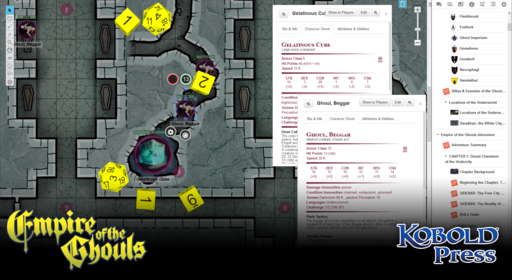 The Underworld Player’s Guide adds several new races and subclasses to the Charactermancer, Roll20’s built in character creation tool. They’re obviously themed around the campaign, with races that would feel right at home in the Underworld. But as mentioned, we don’t actually get there until much later in the campaign. It could be slightly tricky playing a myconid until then! The subclasses look like a lot of fun for monstrous races, such as the Way of Sated Hunter monk, which is only available for Darakhul and Dhampir races.

The Underworld Lairs include 14 single dungeon scenarios with map, tokens, and dynamic lighting, ranging from 3rd to 15th level. This is where Roll20 really shines – drop-in dungeons as individual add-ons is a fantastic asset for any campaign. All the maps look great and offer a variety of locations themed around underground, dark, and evil settings, such as a bloody cathedral of vampires, or a lich lair carved out of a petrified purple worm.

Ironically the lairs may not be the best fit for the actual campaign given the relatively short time spent in the Underground, but they can be added just as easily to any campaign, and the map art is a big thumbs up from me.

Empire of the Ghouls may not be the Out of the Abyss-esque Underworld escapade I was expecting, but it does provide a lengthy, classic 5e campaign adventure in a well-realized fantasy world.

The Verdict: While the OGL hurts the token art presentation on Roll20, Empire of the Ghouls effectively whisks players around Kobold Press’ fantasy world of Midgard.

One thought on “Roll20 Review – Empire of the Ghouls”