A review copy of “The Consort” was provided by the publisher. Find more DMs Guild Reviews on my website and YouTube channel.

The Consort is a fey-themed character class that combines elements of the Paladin, Bard, and Warlock into a powerful, and highly versatile package.

The Consort closely resembles the Paladin, with a d10 hit die, multiple Fighting Style choices at 2nd level, and a half-caster’s spell progression. But doesn’t Paladin already have the Archefey Oath? The Consort takes it a bit further, choosing a Fey Sovereign at 1st level.

The class is nothing without their Fey patron. Despite the name “consort,” literal romance doesn’t have to factor into the background, as long as you’re devoted to one of the four options: The Summer Queen, Winter Queen, the Erlking, or the Leanansidhe.

The choice is incredibly important, as it dictates what kind of playstyle you’ll be pigeon-holed into. For Queen Maab, the Winter Queen, you gain access to cold-themed spells like Armor of Agathys, Ice Storm, and the new Cold Snap, and abilities that enhance your cold damage potential.

However, none of the other three get new spells. The Summer Queen grants shield proficiency, enhanced healing, and the ability to light their swords on fire, while the Erlking is all about gaining new arrow attacks.

Each of the patrons presents widely different abilities and specializations. Why can’t I be a fire spell-slinging devotee of Queen Titania? 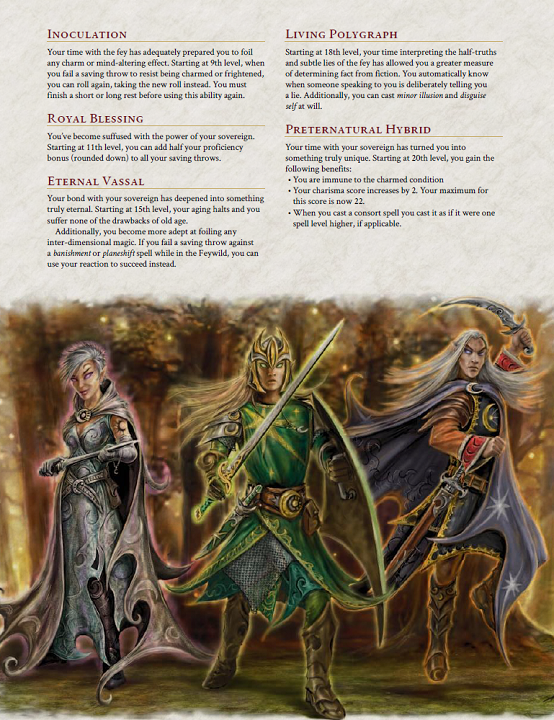 At third level the Consort gains access to Tributes, which work exactly like Warlock Invocations. Each of the Tributes are drawn from different fey-themed creatures, including trolls, brownies, and displacer beasts. They add swimming speeds, additional attacks, advantages on saves, and new spells, with a few level requirements for the more powerful abilities.

I’m a big fan of the Warlock Invocations and the Tributes look like a solid mix of features, and a fun way to customize the character. The only questionable Tribute was Trollish Durability, which grants resistance to a weapon-based damage type. You can take it up to three times to gain permanent resistance to bludgeoning, slashing, and piercing damage as early as level three!

I like the idea of a fey-themed class but the Consort may be too good at too many things, with powerful front-line abilities, great spells, and potentially game-breaking Tributes.

The Verdict: The consort is a thematically satisfying hybrid of Paladin, Bard, and Warlock, though a bit too versatile for its own good.

A review copy of “The Consort” was provided by the publisher. Find more DMs Guild Reviews on my website and YouTube channel.