Ten mini-adventures involving faeries, curses, hags, and other elements of the Feywild.

A review copy of “Through the Veil: Tales of the Feywild” was provided by the publisher. Find more DMs Guild Reviews on my website and YouTube channel.

Though we’ve yet to have an official fey-themed campaign adventure in Dungeons & Dragons Fifth Edition, the DMs Guild has been churning out plenty of quality material that explores the realms of the fey.

Through the Veil: Tales of the Feywild is an impressive collection of ten mini-adventures that use the fey-folk, the Feywild, and its many classic themes and elements.

Through the Veil is jaw-droppingly gorgeous, and I’m not being hyperbolic. The production values are some of the best I’ve seen on the DMs Guild. I love the green background and sidebars, the large text, and the incredible amount of original artwork for each adventure.

Oh, and full color battle maps for every adventure by professional cartographers like Domille’s Wondrous Works and Elven Tower, including separate grid and non-gridded versions. Yes!!

Each adventure is between 10 and 20 pages long. Like an Iron Chef challenge, the designers use the themes, creatures, and setting of the Feywild to craft their mini-adventures. 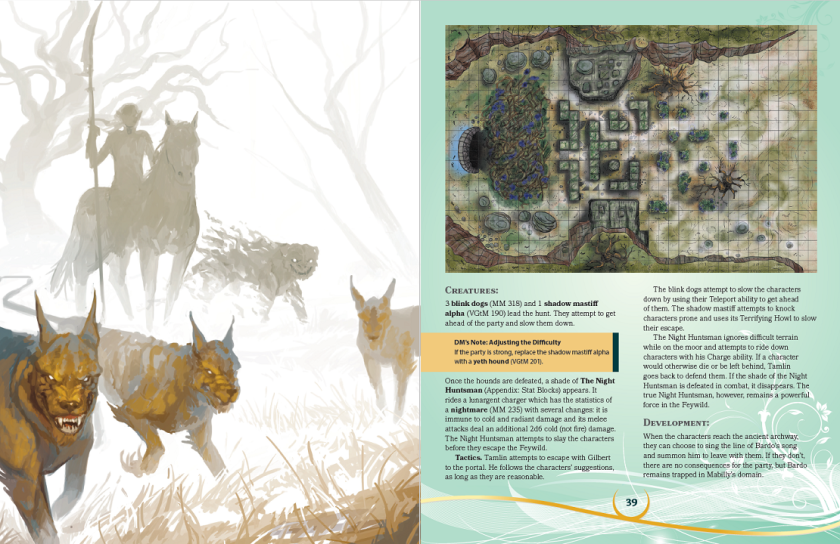 In “Eyes of Stone,” the players are drawn to a village  where a woman has grown cold and distant, and their protective faerie stone’s magic is waning. In the forest they find that she and her immortal lover have both been cursed, and they’ll have to complete a series of trials to reach an audience with a noble fey to end the curse, which has a side effect of unleashing the Wild Hunt on the fleeing players.

In “AOS SI,” a bunch of annoying boggles have invaded a small village from a fey portal in the middle of town. Their poor sister village in the feywild has come under attack. The party tracks the enemy to a cave, defeats the blink dogs, and returns, only to deal with the cleverly disguised hags among the villagers.

The level 20 adventure, “Winter Wonderland,” is especially impressive, taking place in a three-dimensional maze-like glacier mega-dungeon, as the players, along with four other factions, race to acquire the Winter Prince’s missing heart. The adventure crams a lot of content into a few pages, including detailed tactics for running ambushes by high-level elite tactical squads.

Some of the adventures I certainly liked more than others. “The Fomorian Who Would be King” boils down to a fairly straightforward cave dungeon, while “A Problem with Fomorians,” bites off a bit more than it can chew, with a big story involving an invasion of winter faeries into the summer court via portals.

But overall the quality of the adventures is very high, and for the most part do a great job exploring the different aspects and themes of the fey. The incredibly impressive layout and production elevate a solid collection of adventures into something truly special.

The Verdict: From cursed songs to poisoned trees, summer courts and winter courts, and even a full level 20 mega-dungeon, Through the Veil: Tales of the Feywild features an excellent assortment of mini-adventures that draw from the intriguing realm of the Fey.

A review copy of “Through the Veil: Tales of the Feywild” was provided by the publisher. Find more DMs Guild Reviews on my website and YouTube channel.