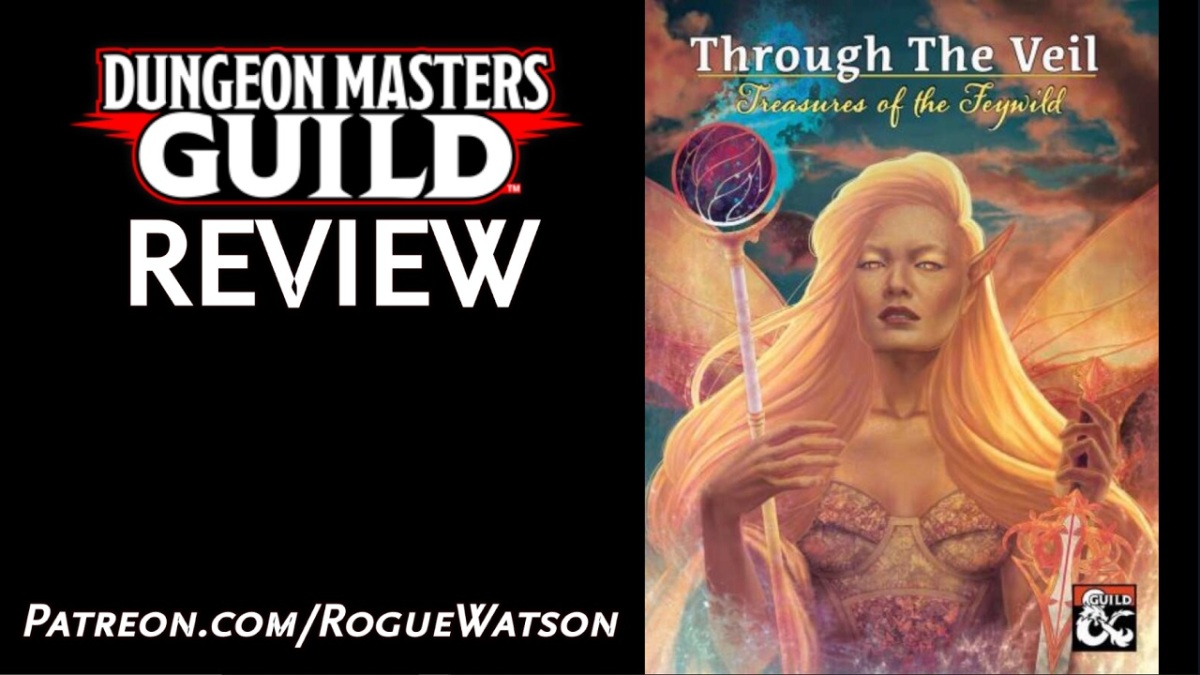 A review copy of “Through the Veil: Treasures of the Feywild” was provided by the publisher. Find more DMs Guild Reviews on my website and YouTube channel.

The first volume of Through the Veil was a superb anthology of Fey-themed adventures (and one of my top ten DMs Guild products of last year). The follow-up, Through the Veil: Treasures of the Feywild, isn’t an adventure at all, but a massive collection of Fey-themed magic items – which is arguably more useful for many DMs. Like its predecessor, it’s also one of the most impressive DMs Guild products of the year.

More impressively, all of these magical items reflect the variety of characters, stories, and themes that persist in the magical realm of pixies, hags, werewolves, and seasonal fey courts, maybe even more effectively than a series of adventures.

Nearly every item also includes a sidebar of lore and backstory, befitting a magical world that’s nothing if not stories upon stories, from the spell slot-destroying Dispatcher crossbows carried by the drow to the humorously-named (and not so humorously-powered) Rapier of Mutually Assured Destruction.

An entire campaign could be built around the Gaze of Mag Tureah, an evil orb that grafts onto the head like a third eye. It offers powerful vision-related powers such as darkvision, eyebite, clairvoyance, and a psychic blast, but it’s inhabited by six fomorian mages who seek out the death and destruction of the entire Feywild, and the restoration of their empire, and can curse its wearer into wishing the same.

I was particularly enchanted by the weapons. The Ironbark Lilly is a dagger-like flower that unfurls each morning, dealing more damage on the first hit thanks to the flower’s poisonous nectar. The wielder of the Shadow’s Kiss dagger can choose to attack their opponent’s shadow, attempting to pin it in place. If slain while pinned, they arise as an undead shadow under their killer’s control.

The Eladrin Recurve bow features an awesome built-in side quest or character arc, if DMs are willing to put in a bit of work. Unlocking its additional seasonal abilities requires the attuned PC to experience certain events, which are achingly appropriate to the Feywild — receive a flower as a gift, make a new friend, experience a friendly creature dying, etc. If you manage to unlock each season (1o total!) the entire bow upgrades from a +1 to a +2. 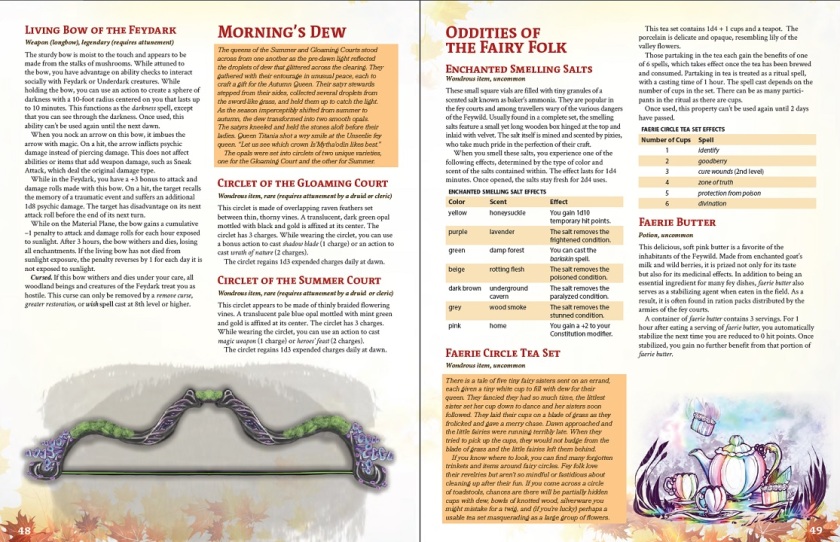 And that’s just the first 10 pages! The weapons alone take up about 20 pages, with over 100 pages devoted to wondrous items, which includes a fancy goblet that can detect poisons, a chess set that can empower insight, a feather that transforms into a tiny feathered dragon, and a compass that can reveal where the nearest exit or entrance to the feywild lies.

Dozens more items, weapons, and armor are organized into collections, narrowing the Fey-theme into more specific sub-sets, such as Symphony of Seasons (fey-powered instruments), Masquerade (magic masks), Oddities of the Faery Folk (magical faery food), and Raiment of the Long Night (cold-themed gear worn by the Prince of Frost). Some, like the Raiment, even include set bonuses if the lucky user attunes to multiple pieces of the same set.

Despite the lovely layout, it can be difficult to read through a 150+ page supplement and find something that can be dropped into your campaign. Thankfully the supplement includes roll tables based on the alphabetical tables from the Dungeon Master’s Guide. These tables can effectively replace the randomized loot generator from the DMG, completely reskinning each item for the Feywild.

A full itemized index and rarity lists are also included, as well as Fey-themed trinkets and adventuring gear, making this a must-have supplement for a full campaign in the Feywild, and a highly recommended one if you love interesting magic items.

The Verdict: with literally hundreds of well-designed magic items brimming with a fully-realized Feywild theme, Treasures of the Feywild is the rare magic item supplement that possesses both the quality and quantity that rivals, if not surpasses,  the 5e Dungeon Master’s Guide.

A review copy of “Through the Veil: Treasures of the Feywild” was provided by the publisher. Find more DMs Guild Reviews on my website and YouTube channel.