Investigate mysterious happenings and uncover an insidious plot at the Singing Brass Dragon Opera in this 4th level adventure.

I had the privilege of seeing The Phantom of the Opera on Broadway over twenty years ago, and it was a transformative experience, with music that I still hum and sing to this day. The Phantom of Music: An Adventure of Love and Death  adapts the beloved musical into a D&D mystery-adventure for 4th level.

The Phantom of Music is designed as a 4-hour adventure that takes place within the Singing Brass Dragon Opera in Waterdeep. It’s almost entirely focused on story-telling, investigation, characters, and exploration, with only a single forced combat encounter – making it an effective (and easily scalable) one-shot that’s far different from the typical dungeon crawl.

The Introduction provides a full timeline of events leading up to the adventure’s start, as well as two pages of background story and set-up for our titular phantom, a disfigured eladrin named Firaer who has been taken in and nurtured by a hag. This important change in the story makes Firaer a tragic villain, and the PCs can use all the clues and information they gain to ultimately resolve the final conflict without lifting a sword (if they choose).

The story follows the classic three act structure, with the first act providing free reign for our heroes to explore the Opera house and talk to the many characters, including Colleen, the beautiful new singer and object of the phantom’s obsession, her boyfriend Rafael, the former opera diva Gunnloda, and the new opera managers Armin and Fermin.

The Dramatis Persona section is four pages long (!), including what each character knows and is willing to divulge. The DM can choose one of three different female NPCs for the hag to impersonate, including the opera concierge and Colleen’s own mother. This important plot point dramatically changes the kidnapping event at the end of act two, which includes a myriad of secret doors and passages the phantom can use to kidnap Colleen, while the hag reveals herself as the surprise villain pulling the strings, and attacks the party. 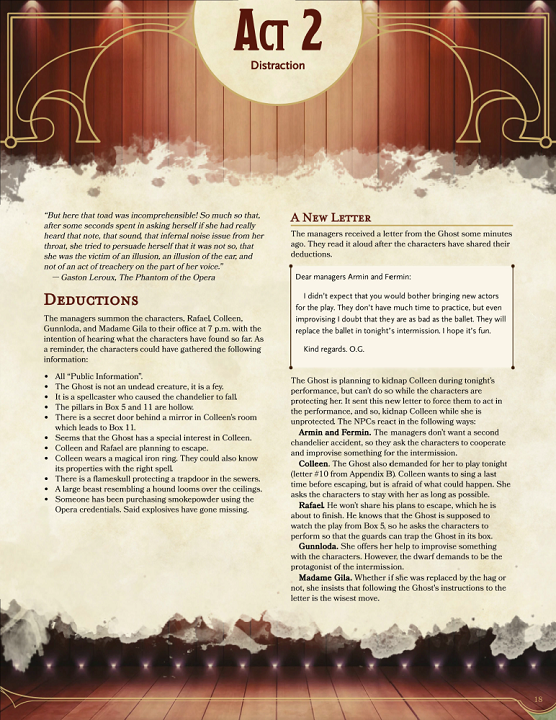 Thankfully the adventure continues even if our heroes are able to protect Colleen, as they discover his lair beneath the opera house, beyond an awesome illusory hell-room that serves as an exciting skill challenge. The phantom has a master plan to destroy the entire opera house with barrels of smokepowder, forcing Colleen to choose between his obsessive love and adoration, or the destruction of a chunk of Waterdeep.

A final DC 25 Investigation check allows the players to deduce the phantom’s explosive master plan, reduced by 1 for each clue or accomplishment the party earned along the way, including finding the barrels, discovering Colleen and Rafael’s escape plans, and reading the many letters sent by the phantom.

The party could decide to fight the tragic figure, but more than likely the climax ends in a dramatically satisfying social encounter – and perhaps blowing up the hag instead!

Mysteries are a tricky genre to pull off in D&D, but by using an established story with several excellent D&D twists and additions, along with a beautiful layout and full color grid maps, The Phantom of Music produces an enjoyable adventure that could slot perfectly into Waterdeep: Dragon Heist, or as a stand-alone one-shot adventure.

The Verdict: The Phantom of Music cleverly adapts the beloved musical into a D&D mystery-adventure, resulting in one of the most well-designed, narrative-focused one-shots on the DMs Guild.

This review has been sponsored by the publisher Find more DMs Guild Reviews on my website and YouTube channel.