A review copy of “Darkhold: Secrets of the Zhentarim” was provided by the publisher. Find more DMs Guild Reviews on my website and YouTube channel.

Wealth. Power. Influence. Of all the base factions in D&D Fifth Edition none are as recognizable or relatable as the Zhentarim, a network of evil-aligned wizards, scoundrels, and thieves. Darkhold: Secrets of the Zhentarim is a comprehensive guidebook to all things Zhentarim, from their history and major players, to new class options and spells, and advice for running evil-aligned campaigns.

The 100+ page guidebook features a professional layout and design, gorgeous artwork with graphic design by Gordon McAlpin, and beautiful maps of Sunset Vale and the Darkhold by Marco Bernadini. The credits are a veritable Who’s Who of some of the best DMs Guild creators, and it shows.

The book is divided into seven chapters that delve into the history of the villainous faction, detail the Zhentarim base of operations and surrounding region, and provide a treasure trove of magic items, spells, and NPC statblocks.

The first chapter includes three new Zhentarim-themed subclasses for Cleric (Strife Domain), Rogue (Spellthief), and Sorcerer (Beguiler). Of the three, only the Spellthief is particularly noteworthy, with the fun ability to steal enemy spells by using some of your sneak attack dice. All three classes embody thematic abilities with strong ties to the Zhents and themes of cruelty, thievery, and deception.

Chapter two (and parts of chapter four) provide a comprehensive history of the Zhentarim throughout multiple ages of the Forgotten Realms, from before the Time of Troubles to after the Spellplague. Memorable figures like Manshoon the Many-faced, and his army of clones, and the imposing skull-faced Pereghost really help drive the narrative threads and prevent the chapter from being a dry history lesson.

I found the history of the Darkhold even more interesting. The huge mountain lair was created by a Netherese lesbian lich (!) to safeguard the regeneration of her lich lover. Its tumultuous history was followed by a giant civil war, before an army of Zhentarim finally overthrew the ruling lich, who now secretly resides in hidden tomb underneath the mountain fortress, along with an entire beholder lair.

The Darkhold, and the surrounding region of Sunset Vale are given a detailed breakdown, including populations, important NPCs, and adventure hooks. Investigate the murder of a gnomish inventor in Hardbuckler, sell-out an escorted caravan on the Zhentarim while on route to Berdusk, or uncover the newest plot by the Cult of the Dragon, as they gather around the Well of Dragons that lies in the Sunset Mountains. 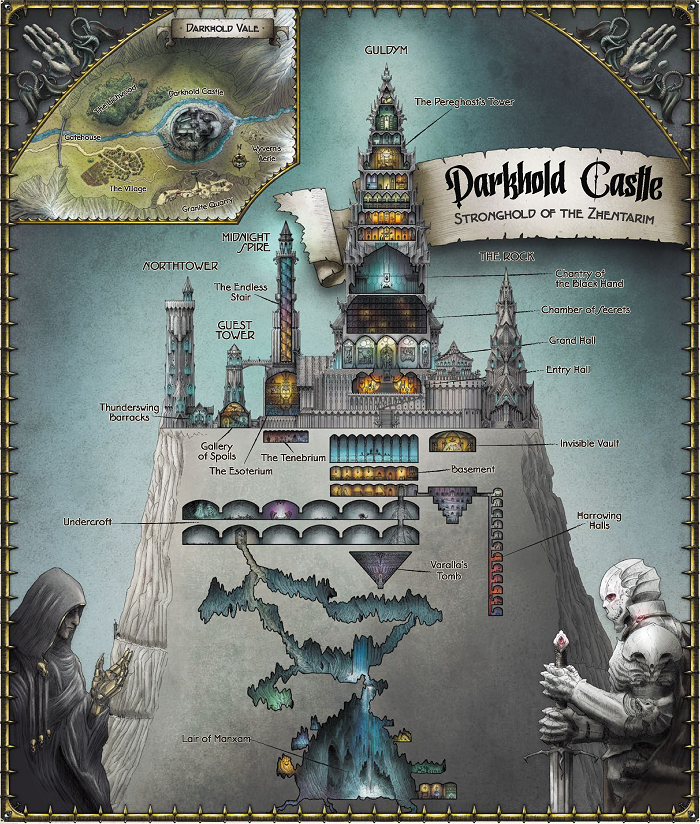 Chapter five is dedicated to handling evil player characters and running evil campaigns. While not explicitly tied to the Zhentarim, the Zhents are an obviously evil faction, and players could always play as faction agents, gaining renown, hiring assassins, and using a specialized form of thieves cant (with fun food-related code words), all of which are provided in various chapters.

As a mostly evil faction, a DM can run into a lot of problems running the Zhentarim with the players involved, and chapter five provides helpful tips, such as avoiding the Chaotic Stupid trope and suggesting more playable example archetypes (like the anti-hero, or redeemer).

The final two chapters cover dozens of new magic items, spells and NPC statblocks, all of which have heavy ties to the Zhentarim theme. Items include the Quiver of Lies, the Rod of Terror, and the Banesword, and spells like Manshoon’s Mage Hand, which literally chokes people, Vader-style.

All the major leaders and NPCs are given full statblocks, including Manshoon and Pereghost, as well as minion NPCs like the skymages (riding their wyvern-like foulwings) and the magic item-laden shadow knights, who are obviously and hilariously based on Batman… if Batman worked for an organized crime syndicate.

If it isn’t obvious by now, Darkhold: Secrets of the Zhentarim is easily one of the best products on the DMs Guild. It’s well-organized and fun to read, with beautiful maps and artwork. Every piece of information directly or indirectly ties to the Zhentarim, from the detailed history of the faction to the new thieves cant expansion. As the classic clandestine crime organization the Zhentarim were always poised as one of the more interesting factions, and with this supplement, you’re getting an offer you can’t refuse.

The Verdict: Whether running an evil-themed campaign, using The zhentarim as a villainous faction, or brushing up on your history of the Forgotten realms, Darkhold: Secrets of the Zhentarim spills all the juicy details of Faerun’s most notorious organized crime syndicate.

A review copy of “Darkhold: Secrets of the Zhentarim” was provided by the publisher. Find more DMs Guild Reviews on my website and YouTube channel.