The party finally reaches the spellbook, just as the World Ender begins to awaken.

Scarlet hurries back, spellbook in hand, Gillian’s magical wind whipping her hair back and forth – keeping the acid cloud at bay.

The triumphant moment is interrupted by an earth-shattering roar. The World Ender! We’re out of time.

From nearby we hear ominous squelching noises.

“Is Scarlet done yet?” calls Kethra, “We need to get out of here. There’s something coming!”

The arrival of Kethra and Gillian turned the tide against the antibodies. Gillian hurled her phase axe, cleaving them apart, while Scarlet enjoyed back-to-back critical hits. Even when the antibodies split into smaller forms, they were no match for our combined might.

The party still wasn’t fully strengthened, however. TIM, though his own solo voyage, had found the spellbook we were after. He had also discovered it was in a room filled with acidic gas and sticky floors.

He was able to escape, reaching us with a Sending spell and washing off the acid with Create Water. We finally met him further south, and had many interesting stories to share – including introducing half the party to the friendly zombie Lord Lucius and his less-talkative cohorts.

TIM used his ninth level spell to cast Mass Heal, bring us all up to full hit points. We probably needed at least 400 of them! Now we better prepared for the final stretch of this gauntlet of horrors.

Lord Lucius warned us of the voices we may hear nearby, and not to fall for them.  Sure enough, as soon as we headed back down the way TIM had come from, an elven woman approached from a darkened hallway, beckoning for us to help. She appeared friendly but tired and in need of aid. Naturally Scarlet was concerned and wanted to help, but the rest of us were suspicious.

Kaelan sent an invisible Styx flying over her head to examine the room beyond. More seemingly normal adventurers lie in various states of distress. Weirdly they could see him perfectly fine. He also noticed they all had odd tendrils extending from their ankles into a nearby wall. Styx flew over to the wall to find a bulbous mass. He poked it, and it glowed red, blasting him with psychic damage.

Styx exploded, and Kaelan felt his death. Seconds later he appeared, beckoning the party into the room, a tendril attached to his foot. Kaelan opened fire on the woman, who proceeded to melt after being struck. Scarlet was finally convinced after that. The creature that lie beyond didn’t come after us, so we decided to avoid that room. 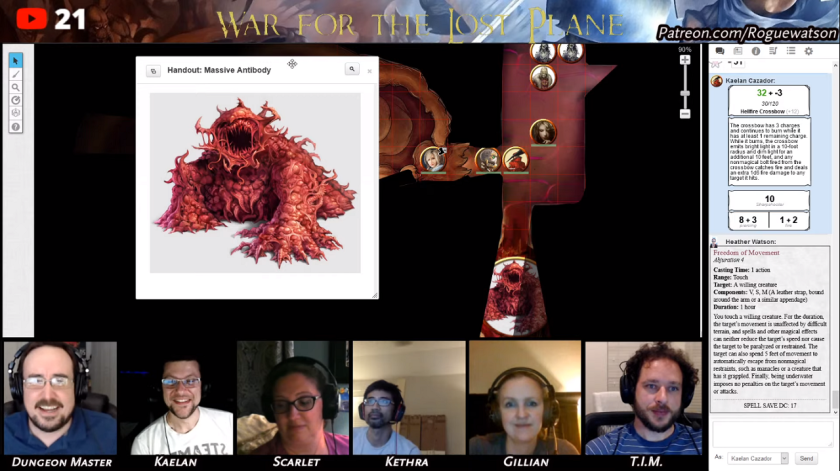 Further south we found the acid-room that held the spellbook. Scarlet cast Freedom of Movement, and Gillian used her Triton powers to summon a Gust of Wind, creating an acid-free wind tunnel. With that combination, Scarlet could simply run into the room, grab the book, and run out. It was just that easy. Until it wasn’t.

As soon as she grabbed the spellbook, the World Ender began to shake, violently. It was waking up! We ran out of the room, and witnessed the biggest antibody we’ve seen yet began to form in a nearby organ, while others started spawning all around us. Lord Lucius cried out that the only way out now was through the mouth – all the way back to the top. We were going to have to fight our way through the entire dungeon all over again.

TIM kicked things off with a Hold Monster spell on the Massive Antibody. The massive creature remained helplessly paralyzed as we ran. The danger was far from over, however. The tubes and tunnels kept us in single-file in many places, and the antibodies eagerly jumped in our path, forcing us to cut them down while we ran.

Gillian embraced the Eternal Slayer sword, gleefully ripping them apart, while Kethra kept up with the zombies in the lead, dispatching any ahead of us.

Once we reached the heart, a wave of blood slammed into us. Kaelan was pushed forward into the trachea, but Scarlet and Gillian were shoved backwards into TIM. More antibodies surged at us, but we remained focused on escaping, and coordinating our attacks on any who stood in our way.

Eventually we made it to the mouth, and a great gust of wind blasted us outward as the World Ender screamed in fury. We were thrown into the desert – right in front of it! TIM held up the magical scroll that would teleport us to safety, but the magic was going to take a few seconds to activate. Seconds in which the World Ender attacked us with its 100-ft maw, and 600-ft long tall. And we though the inside was bad!

Gillian used her Cutting Words to deflect the horns, while the maw gobbled up one of Lord Lucius’ zombies. The tail struck us hard, sweeping all of us end over end. Thankfully Ryrcesh appeared soon after, ushering us into safety, and we collapsed back inside Orner’s observatory.

Rycresh congratulated us on a job well done, but warned that we had barely any time to recover (read: short rest only!) as with the spellbook in hand it was time for the final showdown with Rahmael and Irathon before they rip this world apart.