Uncover the hellish plot that lurks beneath a small town in this mini-adventure for tiers 2-3. 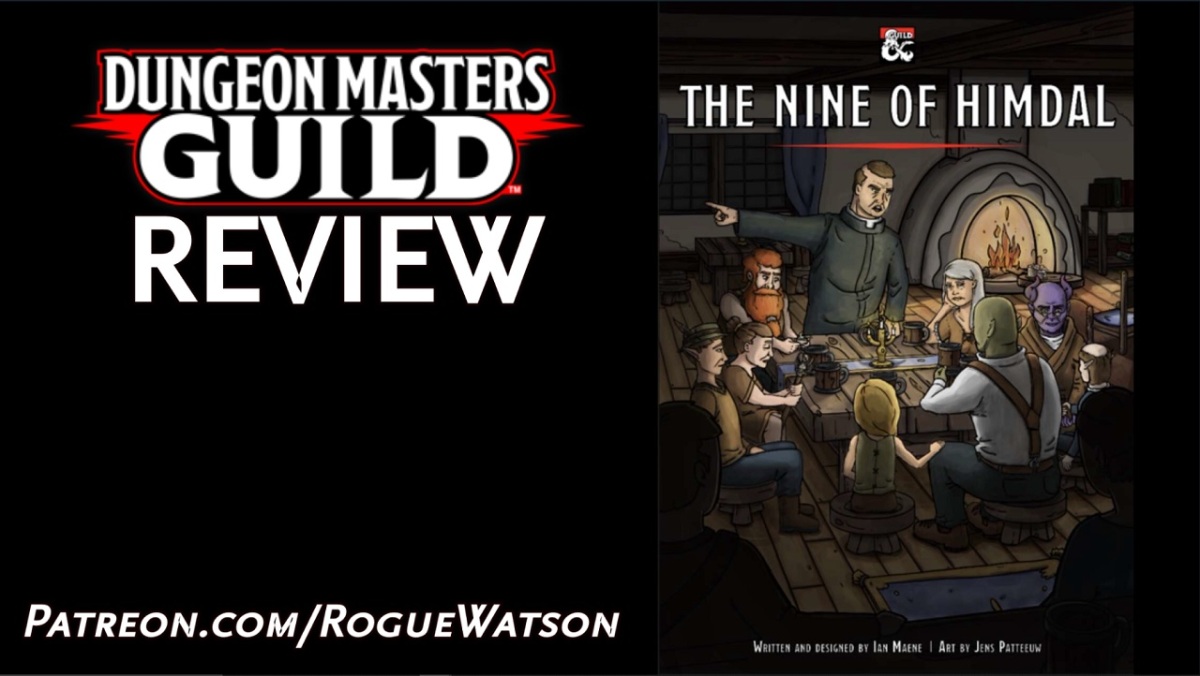 A review copy of “The Nine of Himdal” was provided by the publisher. Find more DMs Guild Reviews on my website and YouTube channel.

The Nine of Himdal is a tier 2-3 mini-adventure that combines mystery, horror, and dungeon crawling in a small town with a sinister secret. It features a solid balance of role-playing, exploration, and combat, though bites off a bit more than it can chew in 16 pages.

Without any adventure hooks to bring them there, the party arrives in the small town of Himdal. The inn is in the middle of a town meeting with nine important NPCs, including the innkeeper, the physician, the priest, and the baker.

As the party meets these NPCs, they’re supposed to realize that each one embodies a different deadly sin, or in D&D terms, different layers of the nine hells. Wrezu owns the general store, and has been selling drugs to increase his profits (greed), while Prantha the innkeeper has started an affair with a married farmer (lust).

The party only gets this one scene to listen in or interact with all of these NPCs. We’re provided with a full rundown of their negative traits and how they express them, as well as a detailed appendix at the end, including nice original character art. But it still feels way too rushed, as what comes next is a mass kidnapping overnight, orchestrated by the story’s villain, an arcanaloth.

Before the party had arrived, the town’s priest had accidently found a hidden chamber beneath the temple, and summoned an arcanaloth, who proceeded to steal his body and hide demonic runes in each of the others’ homes, corrupting them into the embodiment of that rune’s trait, with the goal of using the corrupted NPCs to summon Asmodeus.

It’s a complex plan that’s already well under way. The PCs aren’t given an opportunity to thwart it beyond waking up to a battle between mezzoloth minions and Wrezu’s drug-selling bandits.

The next day the party is supposed to spend their time going around town, and learning that everyone was replaced by doppelgangers, and aren’t acting like they were before (and hopefully also finding each of their devil runes somewhere in their home).

But we only barely met these people before this event takes place. To make matters worse, the subsequent investigation is incredibly tedious, as each of the nine people has a rune somewhere in their house, and it requires little more than going there and making a skill check to find it. The adventure makes no mention on what happens if an NPC is discovered to be a doppelganger — and keep in mind that tier 2 and 3 adventurers have plenty of ways of figuring that out!

The primary goal is to check out the temple and find the hidden underground dungeon. Thankfully there are three different entrances to find it, either via a well (always check your wells, townies!), a hole dug up by kobolds, or touching the right statue inside the temple.

The dungeon beneath the temple is a standard dungeon crawl, with a gorgeous isometric map. I’m disappointed in the use of kobolds as minions, though. They’re overused enemies, and this is not a level two adventure, though it does allow the use of plenty of traps to harry the party with. Traps and combat encounters range from level 5 to 15 with scaling DC, damage, and enemy numbers.

The climactic showdown takes place in a lava-filled area with islands and colored runes, and a central area where the corrupted townsfolk are caged. As the arcanaloth completes the ritual, an NPC is killed each round, adding a nice sense of urgency. A forcefield protects the ritual and the boss, requiring the party to deactivate two cages next to each other by stepping on the right runes.

Each rune is linked to a certain NPC’s cage, and the players only know that if they did the tedious leg work earlier in the adventure. Or they could just brute force it. Oddly, two of the runes nearest the players coincide with two adjacent cages, making the brute force method all but assured.

Linking the demonic trait runes with NPCs is an interesting concept, and I like seeing it utilized in this final battle as a unique puzzle, but the first half of the adventure is far too rushed to make it an earned moment, or to care about these victims. Either the adventure needed more time spent on meeting these NPCs, doing social quests, and discovering their corruptions over time, or we needed to go in the opposite direction, scaling back the number of NPCs to a more manageable number.

The Verdict: While The Nine of Himdal admirably balances social role-playing, investigation, and dungeon crawling, the villain’s plans are overly complex, and the story feels rushed.

A review copy of “The Nine of Himdal” was provided by the publisher. Find more DMs Guild Reviews on my website and YouTube channel.