Rescue another adventurer in the plane of Acheron in this level 6 mini-adventure. 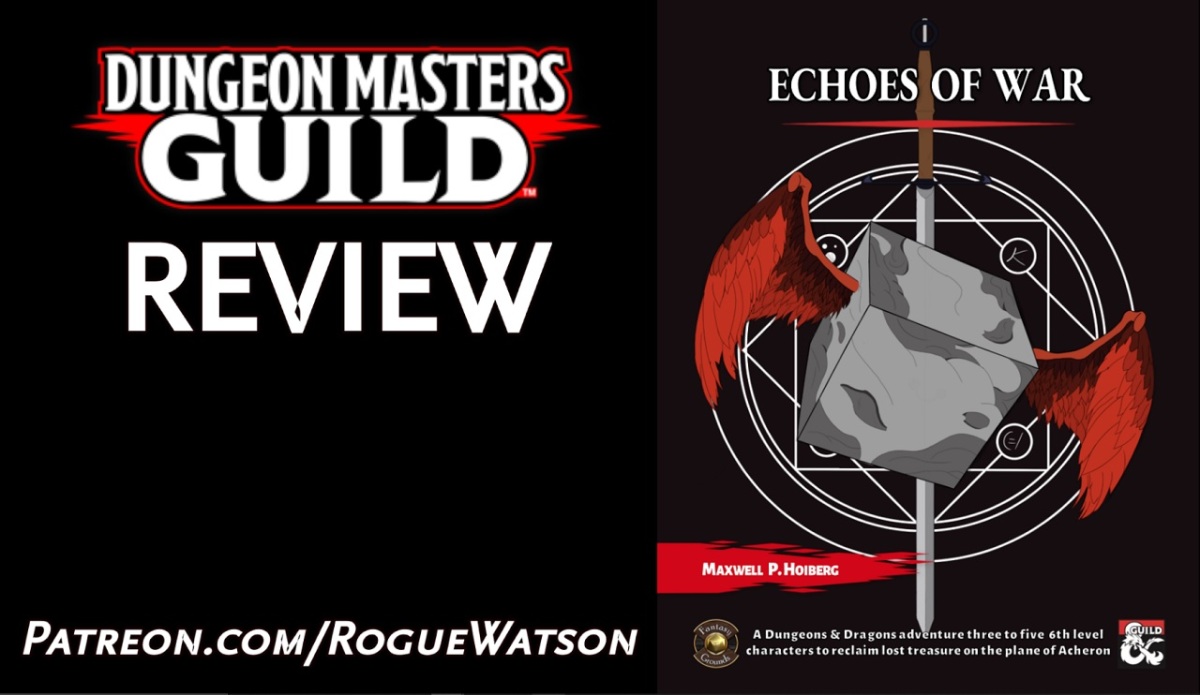 A review copy of “Echoes of War” was provided by the publisher. Find more DMs Guild Reviews on my website and YouTube channel.

Echoes of War is a level six adventure that takes place in the Plane of Acheron. Armed with the knowledge from one of my favorite supplements of last year, Ulraunt’s Guide to the Planes: Acheron, I was excited to dive into an Acheron adventure. Unfortunately this brief foray doesn’t take advantage of its unique setting.

Extra-planar adventures are typically reserved for higher level parties, but Echoes of War is a relatively short and straightforward rescue mission turned fetch quest. The heroes are hired by a wizard, Griswold, to search for his friend Throdar, a half-orc paladin who had traveled to Acheron to retrieve a magic sword.

Griswold transports the party, along with his friendly tortle cleric companion Squirt, to Acheron, a metallic gray wasteland of cube-shaped planets and constant warfare. The immediate area is empty, however, save for a statue of Throdar up ahead. Apparently spending too long in this plane turns you to stone, and attracts a small army of duergar ready to defend the nearby temple where the sword is housed.

The duergar abmush features a nice variety of statblocks, including stone crafters and stone defenders. Griswold and Squirt rush to help their stoned friend, but I’m calling shenanigans on them being able to cast Leomund’s Tiny Hut to escape the fight — it has a 10 minute casting time!

After the battle, Squirt can restore Throdar, who explains how he lost a fight against an erinyes, who is also after the sword. The temple is just up ahead and the party heads inside for a brief dungeon crawl involving ghostly duergar, devilish spined spiders, and the erinyes boss fight. 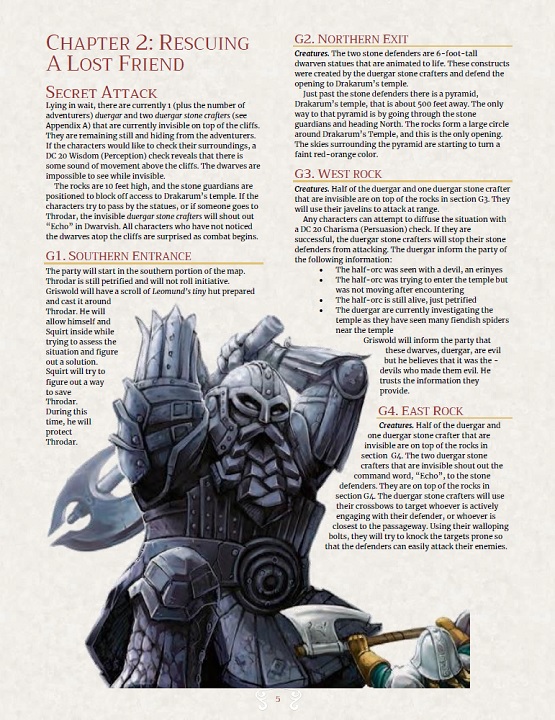 Erinyes are deceptively powerful, as we painfully discovered during one of the most harrowing battles in our tier 3-4 homebrew campaign, War for the Lost Plane. But the party can easily get the jump on her, and she’s been slightly weakened at CR 10. She does have an extra fiery Rope of Entanglement, however. I’m a big fan of enemies wielding cool magic items that players can then loot and equip after the battle.

The adventure also features lovely full color grid maps for all three areas, the duergar ambush and the two levels of the temple dungeon. Big thumbs up!

The sword that everyone’s after, Echo, can only be wielded by non-evil entities, so the erinyes can’t do much in the final dungeon room but defend herself or flee — or try to bargain with the party. Once the party takes the sword the temple begins crumbling, and Griswold can simply teleport everyone home.

Echoes of War is competent but short, but my biggest issue is that it never feels like exploring a dangerous, alien world. The dungeon is a duergar temple that may as well be in the Underdark. No exotic enemies or interesting environmental effects or hazards. It’s an easy adventure to run, though not nearly as memorable and interesting as it should have been.

The Verdict: A mini-adventure in the Plane of Acheron is a surprise treat for level 6 parties, though Echoes of war is too short and straightforward to take advantage of the extraplanar setting.

A review copy of “Echoes of War” was provided by the publisher. Find more DMs Guild Reviews on my website and YouTube channel.