Korvidas is a new domain of dread filled with undead and were-creatures, and ruled by an overzealous hunter. 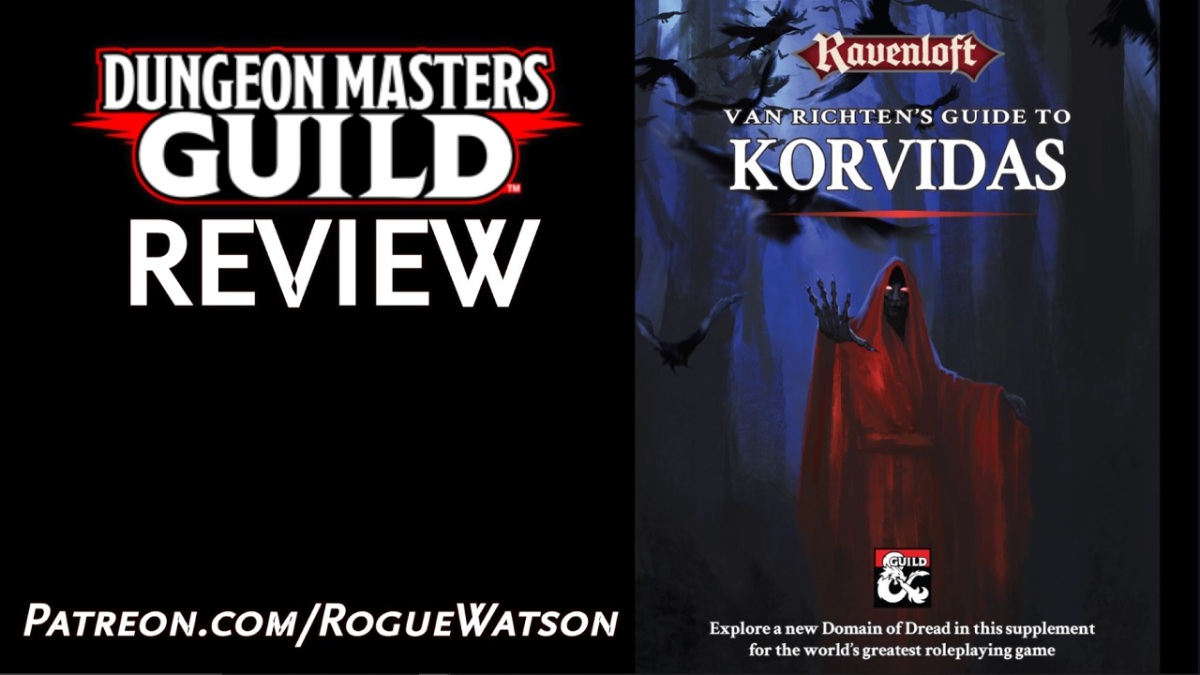 A review copy of “Van Richten’s Guide to Korvidas” was provided by the publisher. Find more DMs Guild Reviews on my website and YouTube channel.

Like all domains of dread, Korvidas is a demiplane surrounded by supernatural mists and ruled by a darklord.

The darklord is Miro Kulenov, a Van Helsing-like hunter who specializes in werewolves. But when he came home one day to find his family slaughtered, he began taking things too far, eradicating all were-creatures, even the more good-natured ones such as werebears and wereravens.

One such wereraven leader cursed him upon his death, and Miro was ironically afflicted with lycanthropy himself, and soon stumbled into a twisted version of his homeland.

Korvidas is the Domain of Teeth and Claw, and absolutely filled with a variety of were-creatures that Miro endlessly hunts down. Lycanthropy is dangerous and illegal, and good-aligned wereravens have to mask their true forms due to the vigilant scarecrows that stand watch almost everywhere. These more powerful scarecrows attack and kill any lycanthropes they see with their silvered claws, and can be directly controlled by the darklord. 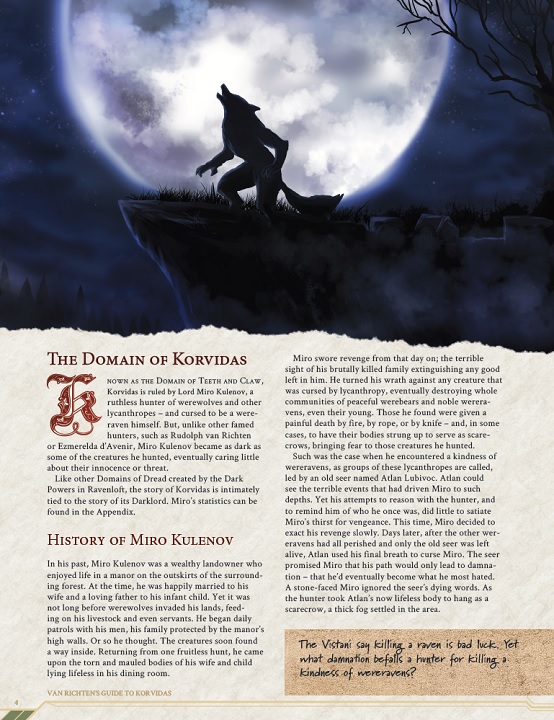 A d20 table of random encounters helps terrorize players when traveling. It’s a bit combat-heavy, as much of the encounters are either hostile lycanthropes or hostile undead, but appropriate to Korvidas’ themes and creatures.

A solid five pages are given for quest hooks and adventure ideas. Most quest hooks are only a single paragraph, but here the designer plans out several paragraphs of interesting story ideas, including encounters, from gathering nightblight poison from the deathlock necromancer to seeking a lighthouse full of chuuls and sea spawn.

“New Moon Rising” is a lengthier adventure designed for level two. At first I was disappointed with how short it is, but it also serves as the perfect jumping-off point for beginning adventures in Korvidas.

The party arrives and fends off a wolf attack, hunts down a werewolf, and discovers its grisly fight at the silver claws of some scarecrows. They’re tasked with escorting a bitten farmer to a bigger town to search for a cure, a dangerous task that would put them directly in the darklord’s crosshairs. The adventure lacks maps, but it’s still a welcome addition to the supplement.

Unlike the domains in VRGtR, we are given a statblock for the darklord Miro, a CR 10 wereraven who can summon his scarecrow minions, and drain them to heal himself. Unfortunately aside from other named NPC statblocks, the supplement doesn’t include any others. We can safely assume everyone has the Monster Manual, but several adventures reference monsters found only in Volo’s Guide to Monsters, and it would’ve been nice to include them here.

As a final bonus, the supplement includes a new lineage in Moon Cursed. Moon Cursed is a decent compromise for a player who wants to play an otherwise very powerful lycanthrope right from the start.

The Moon Cursed provides a trait based on the kind of lycanthropy you’re partially cursed by, such as the relentless trait for Wereboar or Darkvision for Wererat, as well as the ability to partially transform and gain some new features.

The Verdict: Korvidas is the perfect DLC companion to Van Ricthen’s Guide to Ravenloft, adding an additional lycanthropy-centric Domain of Dread, with a brooding darklord and several fun story hooks and ideas.

A review copy of “Van Richten’s Guide to Korvidas” was provided by the publisher. Find more DMs Guild Reviews on my website and YouTube channel.