A review copy of “Shadow & Twilight: A Shadowfell & Feywild Supplement” was provided by the publisher. Find more DMs Guild Reviews on my website and YouTube channel.

Shadow & Twilight is a massive, 200+ page sourcebook and bestiary for the Shadowfell and the Feywild, two realms that are rife with dangerous creatures, exotic locations, and memorable adventures.

The supplement is divided into three parts (technically four, but I’m not counting the one-page introduction): the Shadowfell, the Feywild, and the bestiary.

Although the Shadowfell and Feywild are quite different, they’re organized in the exact same way, detailing notable locations and NPCs (namely Dark Powers and Fey lords!), as well as plot hooks and encounter tables.

Given the amount of products I’ve reviewed over the years that cover the Feywild, I was a bit more interested in the Shadowfell, which encompasses far more than the Domains of Dread that typically get all the attention.

There’s Evernight, the twisted, undead-ruled city with rivers of lava; the creepy Shadow Marsh, where dark reflections of yourself pull you into the murky water; and the Siphoning Isles, home to a bunch of stranded yet patient vampires and their spawn. Not a fun place to get shipwrecked, but an absolutely wonderful horror-themed adventure location!

The d100 encounter tables are particularly well-detailed, offering entire paragraphs of interesting ways to use the new creatures in the bestiary. Witness an aerial battle between a death-seep wyvern and a shadow dragon. Disrupt a litter of zombies and direguards carrying their Skull Lord master. Meet an oddly friendly shadar-kai who’s brutally slain by The Lonely.

And that’s just for the Shadowfell, we’re given the exact same easy-to-read, detailed breakdown for the Feywild, whose player options detail ten different fey bargains.

But the majority of the supplement is dedicated to the bestiary, which includes over 80 new creatures endemic to the two realms. 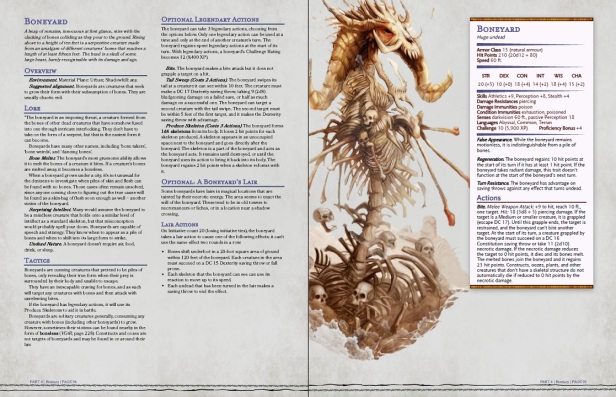 Due in part to their fantastical origins, these are some of the more creatively interesting monsters I’ve seen.

My favorites include the deviously intelligent pile of bones called Boneyard, which can spawn skeletons from its own body as Legendary Actions. The coffin-carrying Pallbearer, who’s coffin can paralyze and suck people inside, trapping them with ongoing psychic damage! And the Mist Dweller, which transforms an entire region into a combat encounter, sprouting tentacles out of the mist and awakening new threats. Not to mention all the Fey lords and witches, each of whom has a meaty, page-long statblock.

Most creatures include optional legendary actions (regardless of CR), and the biggest baddies feature mythic options, lair actions, and regional effects.

A Tactics section is provided for every single creature, providing helpful advice on how to utilize their traits and abilities during combat. As someone who’s frequently overwhelmed with new or complex creatures, this is hugely beneficial!

My only relatively minor complaint is the art. Bestiary’s can greatly benefit from original and bespoke artwork of each creature. The beasties in Shadow & Twilight are given a combination of stock art and the designer’s own original drawings, which don’t mesh well with the rest of the art. The quantity and quality of the creatures more than make up for it, however.

The Verdict: Shadow & Twilight’s huge, excellently detailed bestiary of shadow and fey creatures is worth the recommendation alone, but it also features helpful locations, lore, adventure hooks, and encounter tables for all your Shadowfell and Feywild needs.

A review copy of “Shadow & Twilight: A Shadowfell & Feywild Supplement” was provided by the publisher. Find more DMs Guild Reviews on my website and YouTube channel.