Each of my players introduces their unique characters as we begin our new D&D campaign.

As I mentioned last week in the final recap of our Shadowrun role-playing campaign, we’re moving on to Dungeons & Dragons Fifth Edition for our next online role-playing excursion.

I’m really excited to dive back into D&D, and the Fifth Edition ruleset feels nicely refined and intuitive. We spent our session last Sunday building our characters and learning the rules and character sheets for Roll20, and we’re ready to introduce them. Below I’ve included a picture, character sheet, and a brief backstory written by their respective players.

We officially begin our first campaign, “The Lost Mine of Phandelver” this Sunday. Like Shadowrun our sessions will be broadcast live beginning at 9:30pm Central time. Unlike Shadowrun we’ll be broadcasting to my YouTube channel rather than twitch. Be sure to subscribe!

I am an avatar of justice. I’ve known this since I was very young; in my brood clan I became both arbiter and executor of our laws. But their laws were far too abstract and arbitrary, subjected to the ultimate whims of the clan elders. It was not just.

I sought out a new cause within the halls of the Temple of Tyr. For a time, it was good. It was just. I took Tyr’s word to the pursuit of justice above all things, and to punish and eliminate injustice wherever it could be found. But my methods were soon derided. They called me harsh. Violent. Implacable and merciless. They were right – such is the will of Tyr.

The temple saw a great conviction rising within their ranks the likes of which they had never seen. They were afraid. They called together a mission, a righteous expedition to spread justice across the land. I knew it was banishment from the temple, and I was glad for it. The cloister was weak, Try would be ashamed.

My path of cleansing fire lay before me. I will be the right hand of justice. All those who would do injustice to others, all who deal in tyranny, cruelty, and atrocity, all those who have fallen to corruption, they will all look upon me and tremble. And it will be the last thing they see. 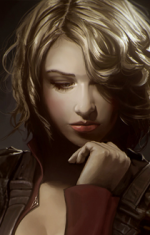 Orphaned from a young age, my earliest memories were of growing up in a typical orphanage for wayward souls. Everyone was a bastard birth of mixed race, run by a half-orc named Fengell. Fengell had a shady, untrustworthy manner, but I was drawn to him. He taught me everything he knew, from how to slit a noble’s purse without being caught, to disappearing in the middle of a crowded street. I even learned to blend in to both human and Elven societies, adopting the more elvish name Keyleth like a second skin.

When I was old enough to leave the orphanage I was fully prepared to make a name for myself, and prove that even bastard half-elves have a place in the world. Tragedy befell the home the night before I left. A sudden fire ravaged the orphanage, and I barely escaped with my life. Many perished, but many more went missing, including Fengell. I was warned every day of the hatred many folks have for “half-breeds,” but the atrocity still shook me to the core.

With my only home gone, there’s no where to go but onward. I still search for my former teacher, and any clues to the mysterious fire that claimed so many lives.

Miri Brightwood is the name the monastery gave me, but it is not my birth name. I was born Miri Greycastle, eldest daughter of High Lord Darian and High Lady Mara Greycastle, Viscount and Viscountess of Waterdeep. I was given all the luxuries and advantages of a noble birth, along with the shackles of an arranged marriage to Lander Evenwood of Athkatla by the age of 10. The marriage would extend the power and wealth of both families, but Lander was a cruel and spiteful young man.

On the eve of my 11th birthday I packed a small travel bag, leaving my rich life behind save for my signet ring engraved with the Greycastle crest and motto. I traveled for three days until, exhausted and starving, I came to an idyllic monastery in the countryside. The Order of Selune took me in, asking me no questions about the life I had run away from. Only asking that I pull my weight. They taught me how to control my waking emotions, and channel the rage and despair I felt about my life into the monk’s controlled and practiced fighting style.

As my training drew to a close I grew restless with wanderlust, anxious to see a world I’d only read about. The monks tasked me with a simple goal when they met me at the doors – discover myself, and always listen for Selune’s guidance. 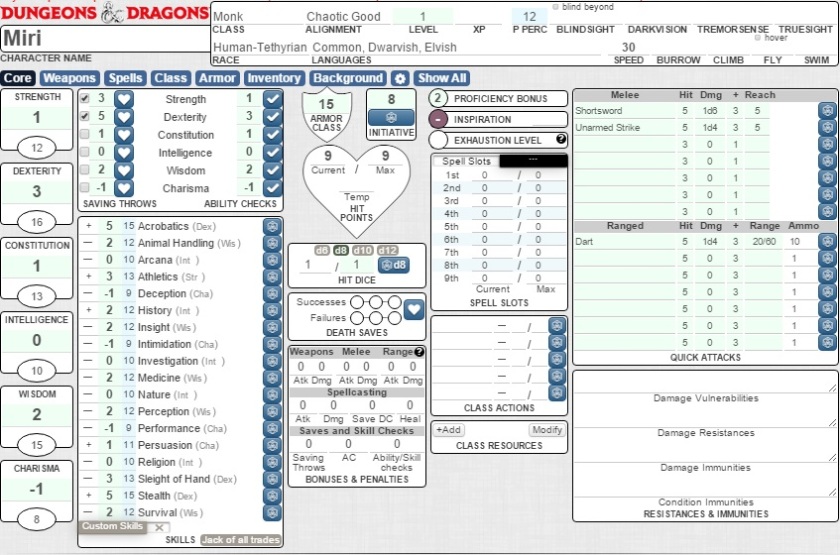 I once taught divination magic at an academy along the East Coast of the Inner Sea. Respected and beloved by my peers, I imparted my passion of gaining a greater understanding of the world around us, and the impact we make. But I heard rumors that the Red Wizards of Thay who helped fund the school were conducting human experiments and dangerous rites of power.

As my own thirst for knowledge threatened to consume me, I sought them out, and began walking a dark path. One by one my friends and colleagues abandoned me. Despite the knowledge gained, I found that their path lay only towards death and destruction. Once we channeled my power to push my gaze beyond the material plane, and the things I saw…cannot bear repeating.

Nearly mad with shame and grief, I destroyed my notes and bolted the University in the dead of night. I know not if the Red Wizards are hunting me. I assumed a new identity, a lowborn name fitting of my deeds. I help others to atone for what I’ve done, but I fear I may wander forever.

Subscribe to my YouTube channel and tune in on Sunday evenings at 9:30pm Central time to watch our D&D sessions live!