Mordenkainen’s Tome of Foes is the third official bestiary released for Dungeons & Dragons Fifth Edition, following the original Monster Manual (2014) and Volo’s Guide to Monsters (2016). At this point we’ve cataloged all of the creatures we’d find in a typical fantasy setting. The Tome of Foes provides much more exotic fare. If you love your cosmic horror and demons, Mordenkainen is here for you.

In the interest of reviewing a bestiary for Roll20, I’ll be focusing this review on the free Adventurer’s League tie-in adventure, “Rrakkma.”

Note that “Rrakkma” is only available to Roll20 Pro subscribers.

The following content is included in the $49.95 Mordenkainen’s Tome of Foes supplement: 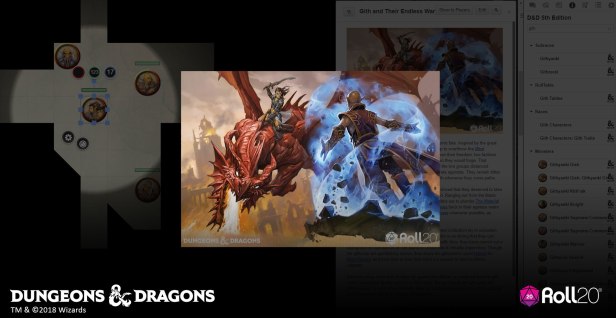 Purchasing the Tome of Foes instantly adds all the relevant material to your Roll20 compendium, which is easily accessed within any new or existing modules. The most obvious addition is a crapload of new monsters.

The common theme is that most of these foes you won’t find loitering in your average dungeon. These are star spawn horrors, hellfire engines, demon lords, and psionic warriors. Extradimensional beings are par for the course, including those native to the Far Realm, the Feywild, and the Nine Hells.

If you’ve been purchasing and playing previously released campaign books, such as Out of the Abyss, you’ll recognize some of the creatures and statblocks here, including memorable big hitters like the Demogorgon.

Existing creatures have been further detailed and expanded upon. Both the Githzerai and Githyanki were already in the original Monster Manual, with four statblock varieites and a nice two-page spread of background information.

Mordenkainen’s Tome of Foes adds another five Gith variants, scaling all the way up to a CR 14 Supreme Commander with Legendary Actions, not to mention officially adding both Gith factions as playable player races.

Duergar, Cambion, and Cultists get simliar expanded treatments. There are a lot of cultist entries, one for every damn demon and devil in the Forgotten Realms. These creatures would fit great with any kind of Chtulhu-like adventure or extra-planar travel (Planescape!) or demon-focused plot, such as from Out of the Abyss. It makes Mordenkainen’s Tome of Foes much more specialized and both easy to recommend and dissuade depending on the kind of antagonists you want to feature.

To get a sample taste of what the Tome of Foes has to offer, Roll20 has converted the new Adventurer’s League module “Rrakkma.” “Rrakkma”is completely free to Roll20 Pro subscribers (and only the host need be a subscriber). It features not only several fun creatures from MToF, but also six pre-generated player characters based on the new Githzerai and Githyanki player races.

If you’re up on your Gith lore you may be scratching your head over why the two races would be working together. Don’t they hate each other?

Normally, yes. But there are radical members from both races that seek to work together, called the Sha’sal Khou. The Sha’sal Khou form hunting parties called rrakkma to hunt down their even greater foe: the hated psionic tyrants, the Mind Flayers.

“Rrakkma” doesn’t provide much background information beyond dropping your rrakkma at the entrance to a dungeon with a simple goal: stop the Mind Flayers from completing a doomsday device.

The Temple of Madness dungeon is linear and straight-forward. Since it’s designed to show off new monsters from MToF, it’s also very combat-heavy, with little room for dialogue, puzzles, or role-playing.  Everything here is trying to kill you, though some may have a little chat beforehand if you like.

The Roll20 map looks like a dark series of caves. Sadly it’s devoid of any room detail, despite the text making references to bodies, scattered items, statues, and even a locked door. I know theater of the mind is a big component to tabletop role-playing even  when using a virtual tabletop, but the complete lack of objects or details on the map is very disappointing.

There are six hostile encounters within the relatively small dungeon, including one that’s right outside the entrance, which is not on the map. The provided blank battle map could be used here, but it’s a bummer to see the first encounter not even mapped.

The encounters offer a good bit of variety, and effectively show off some fun new creatures. Discovering the hidden Mind Flayer at the entrance could dispel the attack from the Duergar and Stone Guards, while an Elder Oblex is a mysterious and creepy foe that can freely converse with the PCs before turning into an intimidating CR 10 brain-draining ooze.

The temple itself is located within Pandemonium in the Plane of Madness. A constant howling wind screeches through the caves, adding an interesting layer of challenge. PCs can’t really converse beyond 10 feet, and everyone must make WIS saves every hour or get a point of Exhaustion, which could eventually lead to Indefinite Madness!

The madness-inducing wind, combined with the threat of the doomsday device, create a ticking clock for the PCs, which is spelled out through a limited number of rests. The PCs can only perform up to four Short Rests, or a Long Rest and a single Short Rest, before the device is charged (PCs receive a magic item that tracks their time). Of course, the more they rest the more they’ll have to make the madness saving throws and suffer from Exhaustion.

The adventure climaxes with our heroes stepping through a portal into the Far Realm and defeating a pair of eldritch monstrosities: a Star Spawn Seer and its Hulk guardian (sadly none of these nifty sounding cosmic horrors actually have pictures). This encounter is also not mapped, though the text specifies that it basically looks like the cathedral room they just exited. I’d roll with that and just paint the tiles a with black stars to signify the alien realm.

As an introduction to Mordenkainen’s Tome of Foes, “Rrakkma,” offers a neat glimpse of the exotic, almost alien creatures and locations found in the new bestiary. The map’s lack of detail is disappointing (particularly the lack of maps for the first and final encounters) and I have concerns about jumping right in with a party of level nine PCs. But if you fancy some extra-dimensional adventuring and a little cosmic horror, “Rrakkma,” and Mordenkainen’s Tome of Foes, should be fun additions.

The Verdict: If you’re looking for demon cults and cosmic horrors, MordenKainen’s Tome of Foes has just what you need, while “Rrakkma” serves as a decent if sparse sample adventure.