The PCs infiltrate the city of Zimar to gather evidence and finally confront Maxillar Pythareus. 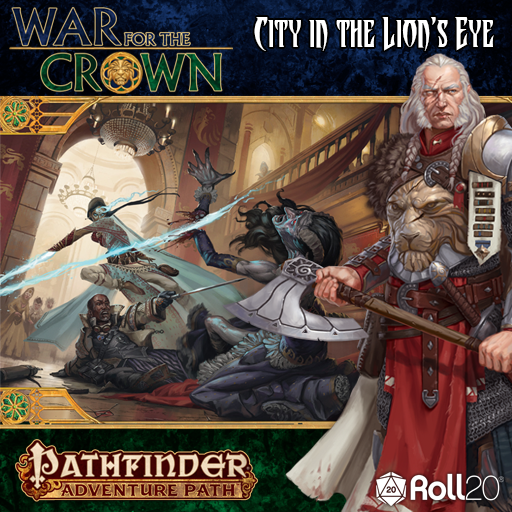 The fourth module in the War for the Crown Pathfinder adventure brings our heroes to the militarized city of Zimar. City in the Lion’s Eye is designed for 10th level PCs who have completed the previous three modules of the Adventure Path.

While if offers some neat challenges in demanding a more stealthy and disguised approach, much of its urban encounters and plot threads feel far too similar to the last module, The Twilight Child.

City in the Lion’s Eye is dived into three parts. Part 1 is simply getting the PCs to Zimar, with a stop at the Lion Blades training academy. Part 2 allows the PCs a bit of freedom to explore the city and gather evidence against Maxillar Pythareus, the biggest rival contender to Eutropia in the succession. The climax occurs in Part 3 after the PCs have gathered enough evidence and directly assault the general in his fortress in the middle of the city.

Part 1 is immensely disappointing for its complete lack of maps or visual player handouts, which is jarringly bad for Roll20. We don’t even get a proper overland travel map! There are some random encounters along the road, but the bulk of Part 1 takes place at the Kitharodian Academy.

At the academy the PCs train to become Lion Blades, which are like the secret agents of Taldor. The PCs are given several skill-based tests and at least one combat test, and can gain inspiration as reward (d6’s they can use to add to rolls in the future). It’s not a bad area but feels weird to spring a training sequence on 10th level PCs.

Afterwards they meet their contact at the small town of Panemona a few miles outside Zimar. I love that they get a bunch of Fake IDs and have to choose which characters to pose as. Since Zimar is the military capital, and run by series antagonist Pythareus, they have to be careful not to draw attention. There’s also the classic bit of troops knocking down the door, and the PCs have to hide and protect their smuggler. 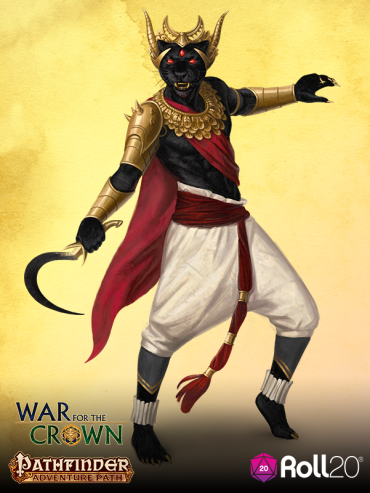 Assuming they bluff their way into the city, Part 2 begins. The PCs have a single thread to follow – the last Lion Blade in the city, but he’s been captured and now impersonated by a Rakshasa, Milon Jeroth.

The PCs are actually given the opportunity to kill Milon fairly early once they sniff him out, and could even disguise themselves as he and his agents, taking over his operations and undermining Pythareus from within. That’s a neat and thematic concept; otherwise it turns into a standard “go to this location and kill all the things” scenario, as you get several leads from Milon about his agents, allies, and organizations.

Sadly Part 2 only has three maps for the six different locations in Zimar, and none of them are as interesting as those found in The Twilight Child, though I do love the idea of bargaining with a pompous Otyugh who prides himself as king of the sewers.

Once the PCs have gained enough evidence they can move on Pythareus. The general isn’t an easy target. He’s holed up in his fortress on the river, and it has all the defensive and security you can imagine.

The third act becomes like an epic heist movie, only with the end result to take out a target rather than steal anything. Still, going in quietly as long as possible would help even the odds substantially. I love the detailed notes about guard patrols  and defenses, making the fortress a buzzing hive of activity, especially once the alarms go off.

While the adventure has a strong ending, Parts 1 and 2 are severely lacking. Part 1’s lack of maps is awful and Part 2 just feels like a lesser version of what the PCs were just doing in the last adventure. I get that this Adventure Path focuses more on social circles and urban exploration, but putting two city-heavy adventures back-to-back is disappointing.

The Verdict: City in the Lion’s Eye plays a bit too SIMILAR to the previous adventure in the war for the crown, with a better third act but far less maps and activities, making it a disappointing entry.