A short DM supplement for the PC headquarters in the Chronicles of Sorrow. 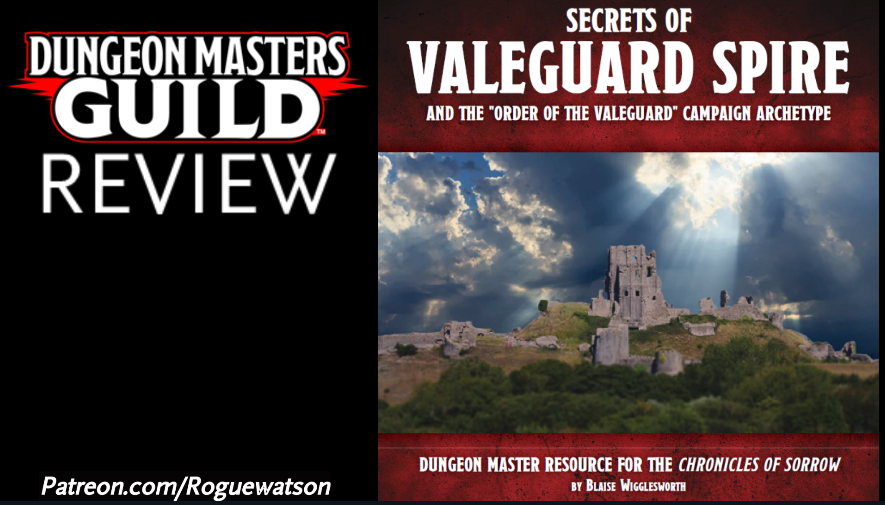 A review copy of “Secrets of Valeguard Spire” was provided by the publisher. Find more DMs Guild Reviews on my website and YouTube channel.

“Secrets of Valeguard Spire” sounds like the title of an intriguing D&D adventure, but it’s actually an extremely short DM supplement based on the author’s level 1 adventure, “Sorrow’s Ruin” (which is excellent).

Specifically “Secrets of Valeguard Spire” expands upon an interesting element that’s added at the end of “Sorrow’s Ruin” – an inter-dimensional keep that the PCs gain as a base of operations. The supplement adds fun new abilities that are granted to every PC who joins up with the Valeguards, but would be better served in the next full adventure in this campaign, rather than as a tiny stand-alone supplement.

Not including maps the entire supplement is only about four pages long, winning the dubious award of shortest DM’s Guild product I’ve ever reviewed. The first page provides some background information on the Valeguards, a quasi religious-military organization in service of Ilmater.

These days the Valeguards are mostly just a legend, but the PCs are given the keys to Valeguard Spire, their mystical tower, after the events of “Sorrow’s Ruin.” Presumably it will feature heavily in future installments of the Chronicles of Sorrow, which I’m definitely looking forward to.

This supplement provides a new concept called a Campaign Archetype. That’s a weird name for applying a PC’s faction organization, in this case, the Valeguards, into granting new abilities for the PCs. Think of it like an additional skill tree that any PC can access, regardless of their class or race. Abilities are unlocked as you level up, with the earliest arriving at level 3, letting you cure the Frightened condition up to a number of times equal to your proficiency bonus per day.

These abilities range from useful to astonishingly awesome, like unlocking a special stash you can teleport items to and from, with a few limitations. I love that the PCs literally unlock new levels of the Spire, opening up new rooms as the campaign progresses as if it were a living base in a video game.

It’s a really neat idea and one that I wish Wizards of the Coast had done more of with their factions like the Harpers and Order of the Gauntlet. I get using Factions mostly as role-playing tools but it would have been nice to gain some kind of mechanical bonuses for being official members of those factions, and give more incentive for players to care about them.

As much as I love the idea of a PC’s faction granting another avenue of abilities, there’s just not enough content here to justify a stand-alone product. The saving grace is that it’s a Pay What You Want Product, but if anything it just makes me more excited about future content for the Chronicles of Ruin.

The Verdict: The Valeguard Campaign ARchetype is a neat idea, but “Secrets of Valeguard Spire” fails to include much of anything other than EXCITEMENT for the next CHRONICLES of Sorrow adventure.

A review copy of “Secrets of Valeguard Spire” was provided by the publisher. Find more DMs Guild Reviews on my website and YouTube channel.