A review copy of “Advanced Arcana – Alternative Mana-Based Spellcasting System” was provided by the publisher. Find more DMs Guild Reviews on my website and YouTube channel.

I’ve never been a big fan of Dungeon & Dragons’ unintuitive spellcasting system, with leveled spell slots and having to memorize spells. Give me a universal mana system or simple limited number of uses per day or per encounter any day.

“Advanced Arcana” attempts to translate the mana system from popular collectible card game Magic: The Gathering. This is particular relevant with the still semi-recent release of the official Wizards of the Coast published supplement, Guildmaster’s Guide to Ravnica, which finally adapted at least some of Magic: the Gathering‘s content into Dungeons & Dragons Fifth Edition.

But there’s still a lot of room for M:TG content, including its actual magic system. Unfortunately Magic‘s system is also a bit of a pain for different reasons, and combining it with D&D results in needlessly fiddly spellcasting that’s already giving me nightmares of some of the worst gameplay aspects of the card game.

Thankfully the new spell system is only a fraction of the content available in this massive 150+ page guide book. With new magic items, creatures, and even adventures, “Advanced Arcana” is practically the Xanathar’s Guide to Everything: Ravnica Edition.

The first 20 pages are devoted to adapting the mana system from Magic: The Gathering, which involves drawing and playing land cards and tapping (spinning them sideways) them for mana, then using that mana as the resource to play other cards.

Translated to D&D, a spellcaster needs to spend a Bonus Action (or, alternatively all of their movement) to tap into the land around them to establish a Mana Link, potentially limiting or even cutting off certain spell schools entirely. They have to transfer mana from the land to their mana pool, and use that mana – and their spell slots, to cast a spell.

On top of that extra work, each spellcaster has to choose two mana colors from M:TG: White, Black, Red, Blue and Green. Like in M:TG, each color has an associated theme, such as death for black and destruction for red. From then on they can only cast spells associated with those colors, which are neatly divided up and listed later in the supplement.

While this creates a much greater form of limitation on spellcasters, it is keeping within Ravnica’s theme. Each of Ravnica’s 10 guilds is associated with two of the colors, with each combination available. This new system allows PCs of their associated guild to truly embody that guild’s traits, motivations, and magical inclinations.

But the actual system just feels like a mess. I was hoping this would eliminate spell slots entirely, but instead if imposes further limitations on spellcasting, and lengthens turns for spellcasters, as well as creating more things everyone has to keep track of, such as excess mana for mana burn. Pretty much the opposite of what I look for in rules supplements. 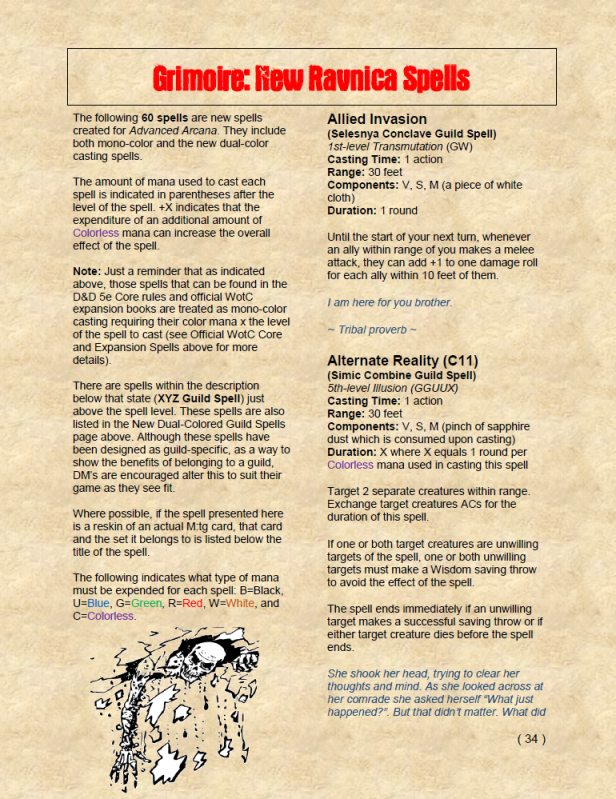 Although the mana system is ostensibly the reason to purchase this guidebook, it’s actually only a small part of what’s included. The rest of the supplement offers new Ravnica-themed creatures, spells, and magic items, and even two mini-dungeon crawl adventures for Tier 1 and Tier 2 level parties. The dungeons provide solid little hack and slash adventures, with proper encounter scaling and separate player maps. Unfortunately it’s that Dyson Logos style that I’m not a big fan of, but to be fair I wasn’t even expecting to get adventures in a supplemental guidebook.

All of this new content is hugely welcoming, and does a fantastic job drawing in the lore and gameplay of Ravnica and the card game in general. If you’re not already a fan of Magic: The Gathering, and the Ravnica setting specifically, “Advanced Arcana” is probably not for you. But even for non-Magic fans the Ravnica setting is compelling enough to be worth exploring, and this guidebook provides a wonderful source of additional, highly thematic content.

The Verdict: Though the adapted mana system falls flat, “ADvanced Arcana” packs a ton of welcome content from Magic: The Gathering and Ravnica into Dungeons & Dragons Fifth Edition.

A review copy of “Advanced Arcana – Alternative Mana-Based Spellcasting System” was provided by the publisher. Find more DMs Guild Reviews on my website and YouTube channel.