The arcane-punk urban world of Magic: The Gathering’s Ravnica gets an official fifth edition conversion with new races, subclasses, backgrounds, and a 1st-level adventure. 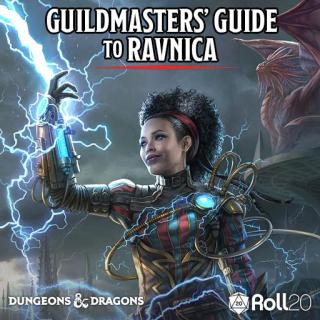 My history with Magic: The Gathering is ancient to say the least. I was there on the front lines when it launched in the early 90s, obsessing over booster packs and deck builds, and playing it in between band practice in middle school. By high school its popularity with my friends and I had worn out a bit, though I still dabbled occasionally.

Fast forward about two decades and Magic is still riding high while other big collectible card games have come and gone. Despite both D&D and M:TG being owned by the same company, it’s taken until recently to get official crossover content. Gulidmasters’ Guide to Ravnica represents the first print book that uses lore, creatures, and races from the card game and converts them to Dungeons & Dragons Fifth Edition.

The Roll20 module includes a first level adventure, the full compendium of lore, races, and creatures, and a bonus character art pack. The guild-focused content is thorough and interesting, with plenty of options for players and ideas for DM’s wanting to run an adventure in this arcane-punk city.

The following content is included in the $49.95 Guildmasters’ Guide to Ravnica Roll20 module:

The ‘Guildmaster’ part of the title isn’t just another term for Dungeon Master; Ravnica is all about the guilds. It’s a planet made up of one single mega city, and the ten guilds operate in both harmony and conflict with one another.

In Magic they represent various two-color combinations and ideologies. For D&D, that equates to alignment and character archetypes.

The Azorious Senate, for example, is all about Law and Order. Its members are typically Lawful Good and are made up of enforcers, legislators, and judges. Clerics (along with the new Order subclass) and Paladins are obvious choices, though Bards make excellent scribes, diplomats, and orators, while every guild can use the spells of a wizard (with appropriately themed spells).

The lore on Guilds is extensive and used to create fun and interesting new backgrounds, each with their own unique ability, set of spells, and proficiency bonuses. Each guild is also given its own sample battle map that’s appropriately themed – for example, a laboratory for the Izzet League. The maps are done in the Dyson Logos hand-drawn style that I’m not a fan of, especially when viewed on a VTT like Roll20. The many adventure hooks and sample ideas are a welcome inclusion, however.

With 10 guilds you can easily slot any conceivable character concept within one of them, from the battle-hungry Cult of Rakdos to the mad scientists of either the Izzet League (tech-focused) or the Simic Combine (biology-focused). I particularly enjoyed the visual flow chart to help Ravnica neophytes, like myself, choose the right guild for their character, as well as a suggested guild for every single subclass through Xanather’s Guide to Everything.

Guilds are also used to organize the new monsters and NPCs found in Ravnica. Since we’re looking at a gigantic urban setting, it’s less about beasts and more about NPCs, yet there’s still plenty of cool variety. The anti-mage Nivix Cyclops looks like it wandered off the set of BioShock while the Simic Combine features several different mutant hybrid options that reflect their Dr. Moreau-style tinkering.

While the Guilds are the biggest highlight of the book, we also get six new races and two new subclasses. The races should be particularly exciting for fans of anthropomorphic humanoids, such as centaurs, minotaurs, and the slightly lesser known Loxodon (elephant-people!).

Full statblocks, cultural information, and traits are listed, and none of them seem terribly game-breaking, though I think we’re really starting to stretch the definition of Medium size with the 7 feet tall elephant people (the centaurs here at least are mentioned as being much smaller than traditional D&D centaurs).

The most interesting new race are the Simic Hybrids, basically lab-built mutants. At 1st and again at 5th level you can choose from several awesome abilities and traits, including gliding, climbing, swimming, and spitting acid!

The new subclasses are the Order Domain for Clerics and Circle of Spores for Druids, both very thematic to several different guilds within Ravnica. The Spore Druid lets you animate fungal zombies The Last of Us-style!

Guildmasters’ Guide to Ravnica also includes a 1st-level introductory adventure called Krenko’s Way. A Goblin mob boss recently escaped prison and the PCs are hired to find him before a rival gang bent on revenge turns the streets into a war zone.

The mini-adventure begins by searching for Krenko using different leads and player-contacts. Time is actually a factor here, and a helpful timeline of events is provided so the DM can track what Krenko’s doing during the search. Eventually the party should find his hideout, which is the one battle map in the bundle that’s actually used (and has pre-placed tokens). It’s a bit more detailed and better-looking than the guild maps, but still color-less.

It’s not a bad little adventure though isn’t particularity memorable or special, nor does it do much to show off the unique setting of Ravnica. If you’re mostly interested in the maps and adventure, Guildmasters’ Guide to Ravnica is a disappointment. The awesome monster art and tokens are very welcoming, however, and all the lore, story hooks, and new character options help make up for it.

The Verdict: Guildmasters’ Guide to Ravnica includes fun new races, character backgrounds, and story ideas from the urban setting of Ravnica that fits nicely with a more arcane-punk D&D world.