Nine disease-themed mini-adventures drawn from the plagues provided in The Malady Codex. 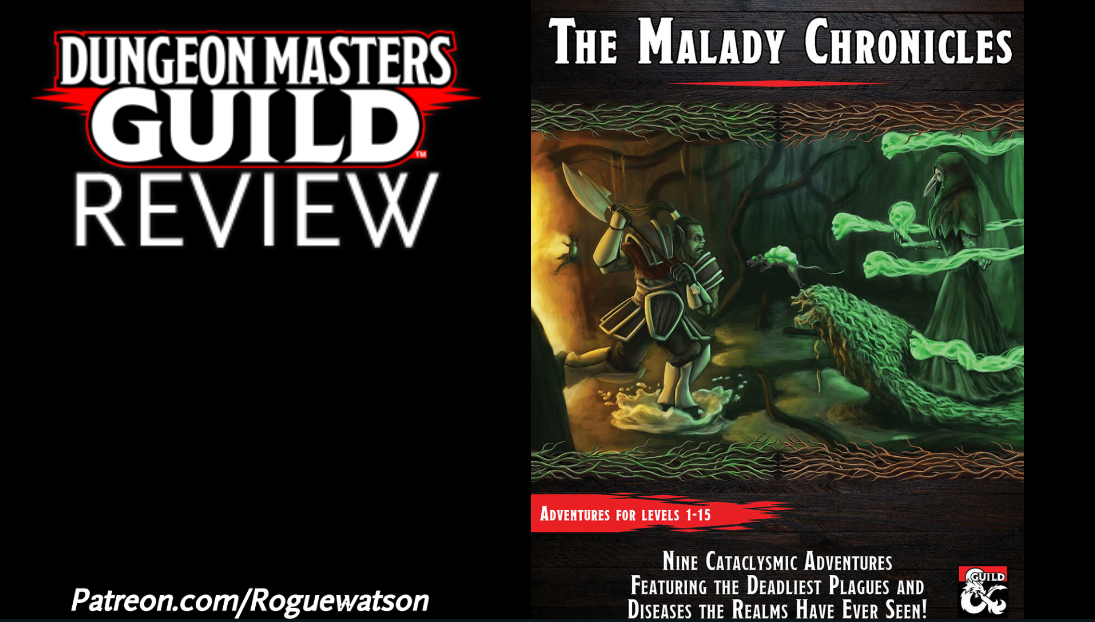 A review copy of “The Malady Chronicles” was provided by the publisher. Find more DMs Guild Reviews on my website and YouTube channel.

When I reviewed The Malady Codex almost exactly a year ago, I was impressed with its deadly new diseases, based on all-too-real real-world diseases. The Malady Chronicles takes these diseases a step further, featuring nine adventures based on The Malady Codex – though you don’t need the codex as all the information is included here.

The adventures learn toward shorter one-shots and each features a disease-related theme, with emphases on investigating and combating these terrible and swift plagues.

As I expected from the same doctor-creator team of The Malady Codex, The Malady Chronicles is beautifully laid out, with tons of artwork and zero editing issues.

Nine adventures are included and range from level two all the way up to 12-15. Though they can be played separately a la carte, an optional campaign is included in the introduction as a way to tie all the adventures together.

The campaign doesn’t work quite as well as I was hoping – more like the connections were added after the fact than baked in from the beginning, but it’s still a neat idea that I’d love to see more of these adventure compilations try and tackle.

My favorite adventures tackle their disease in interesting ways, give the PCs plenty of room to investigate, and provide fun memorable moments.

The King’s Evil is a level three adventure that tasks the party with infiltrating a leper colony/prison camp to rescue a missing dwarf.

The camp includes plenty of shady goings-on, and a secret underground mining operation and a gang boss who can transform those that cross him into oozes. The PCs can even find someone half-transformed into a gibbering mouther, and save them if they’re fast enough. 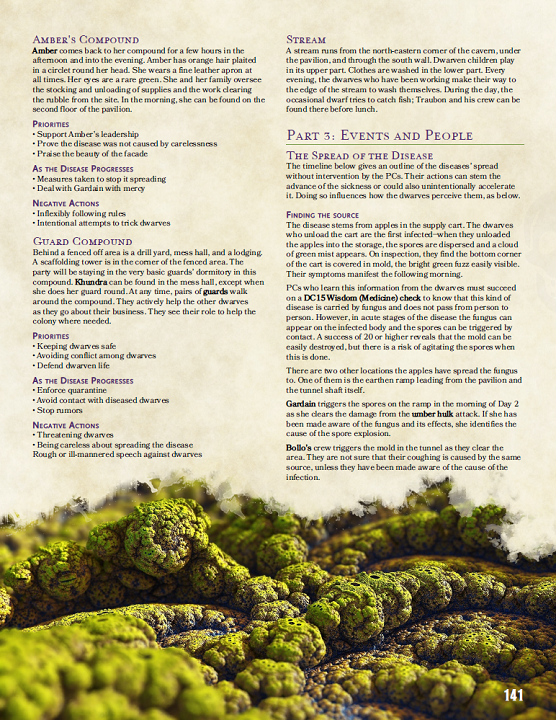 Another favorite is The Passenger (lvl 8), which features illithids running their own messed-up restaurant that serves intellect devourers! The ensuing brawl is preceded by some excellent crime scene investigations as the PCs discover the illithid virus, along with an accompanying sergeant who starts exhibiting the telltale symptoms.

Other adventures provide solid ideas but don’t quite put enough focus on their diseases. I generally liked the dungeon designs of Blossom of Oshadis and Shadow Over Waterdeep, but the disease themes were minimal. Plaguebearers, Viral Village, and Purification of Ras Calaq did a better job with the theme but were all bit too short and straightforward

Further complicating the range of quality is the map quality. Blossom of Oshadis includes three different map styles for its single small dungeon, while others with more complicated designs have no maps at all. It’s an annoying range in quality and I wish these compilations could come up with a single uniform style to provide consistency.

In addition to the adventures, the compilation also includes seven pre-made level one characters and over a dozen disease-related equipment. The characters are particularly impressive, featuring artwork and full backstories that weave into one another, giving great reasons for the classic question of why a group of diverse adventurers would randomly group up for a campaign.

Despite the range in quality I’m definitely positive on The Malady Chronicles. It provides a lot of interesting ideas and concepts, even if I don’t like every single mini-adventure.

The Verdict: based on the diseases from The Malady Codex, The Malady Chronicles builds a series of interesting adventures with a large focus on discovering and investigating the deadly plagues.

A review copy of “The Malady Chronicles” was provided by the publisher. Find more DMs Guild Reviews on my website and YouTube channel.