Over 450 monster variants based on the original 5E Monster Manual.

A review copy of “Monster Manual Expanded” was provided by the publisher. Find more DMs Guild Reviews on my website and YouTube channel.

The original D&D Fifth Edition Monster Manual features over 150 monster and NPC statblocks, from angels and aboleths to yuan-ti and zombies. It’s a staple for any DM, but can be lacking when it comes to individual sections, such as having only a single statblock for each of the different giant tribes.

Monster Manual Expanded seeks to rectify these issues, acting as an unofficial expansion pack to the Monster Manual by adding a multitude of new variations of existing monsters, creating an astonishing tome of over 450 statblocks.

Monster Manual Expanded includes over 300 pages, and thankfully a table of contents that sorts all the wonderful monsters within (as well as an awkward single chapter that acts as a Foreword). It’s clearly designed as a direct supplement to the original Monster Manual, with the same statblocks, art layout, and organization.

You won’t find much if any completely original monsters in here. This expansion combs through the original book monster-by-monster, adding at least one new variant. Most commonly it’s a scaled-up version to use with higher level parties, or to create more challenging encounters, as Fifth Edition monsters are notoriously easy for their relative challenge rating. 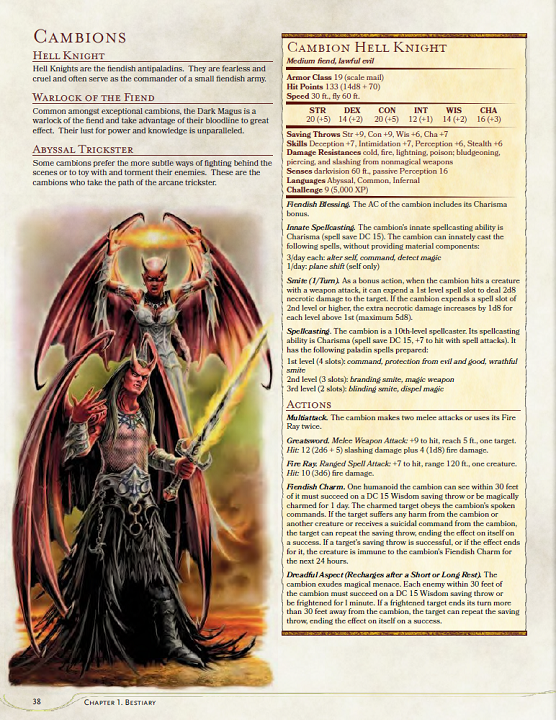 Ankhegs, for example, are neat giant insect creatures. In the original MM we’re only given a single CR 2 version. The MME provides both a CR 1/4 Broodling, and a CR 8 Brood Queen, which we could use as a cool boss monster, or an upgraded ankheg statblock for battles with higher level parties.

Other up-scaled creatures include the Great Bulette (CR 12), Dire Owlbear (CR 8), and Balor Lord (CR 21, with a Warcraft 3-like meteor entrance!). Even creatures who seemingly didn’t need any variations are given new versions, like the Displacer Beast Pack Lord (CR 7) and Beast Stalker (CR 5).

Since every monster originally appears in the MM (or rarely, older editions of D&D), the balance for all these new variations looks solid at-a-glance. The CR 5 Beast Stalker, for example, gains a third multi-attack with a bite, can hide as a bonus action, and deals extra damage to wounded enemies once per turn, in addition to increased HP, AC, and damage output.

Humanoid foes in particular are given some much-needed love, and not just the heavily-used NPC section. We all love exotic monsters, but most D&D parties will be fighting a lot more goblins and orcs than behirs and manticores, not to mention an impressive new NPC appendix with 30 new humanoid opponents, based on monks, bards, and warlocks.

Orcs alone are given 10 (!) new statblocks while still working within the confines of Tier 1 challenge ratings, such as Orc Archers (CR 1/2), Bersekrers (CR 2), and Sorcerers (CR 5), providing some welcome variety for any orc encampment. Other sentient foes like giants, sahuagin, and drow are similarly given several extra versions and styles, reminding me of the excellent job Wizards of the Coast did with the themed elemental cultists from Princes of the Apocalypse.

Most of these sections by themselves would not be terribly impressive. Using the rules provided in the Dungeon Master’s Guide (along with some applied D&D knowledge), most DMs could craft their own monster variants, especially the up-scaled versions. But the sheer volume  of statblocks that meticulously provide new variants for every single monster and group is impossible to ignore. Monster Manual Expanded is an incredibly helpful asset for any Dungeon Master looking for new flavors on old favorites.

The Verdict: Monster Manual Expanded adds an impressive amount of variations and up-scaled versions of all the 5e foes from the original Monster Manual, providing new flavors on old favorites.

A review copy of “Monster Manual Expanded” was provided by the publisher. Find more DMs Guild Reviews on my website and YouTube channel.