A short but helpful treatise on ratfolk, including a dungeon lair. 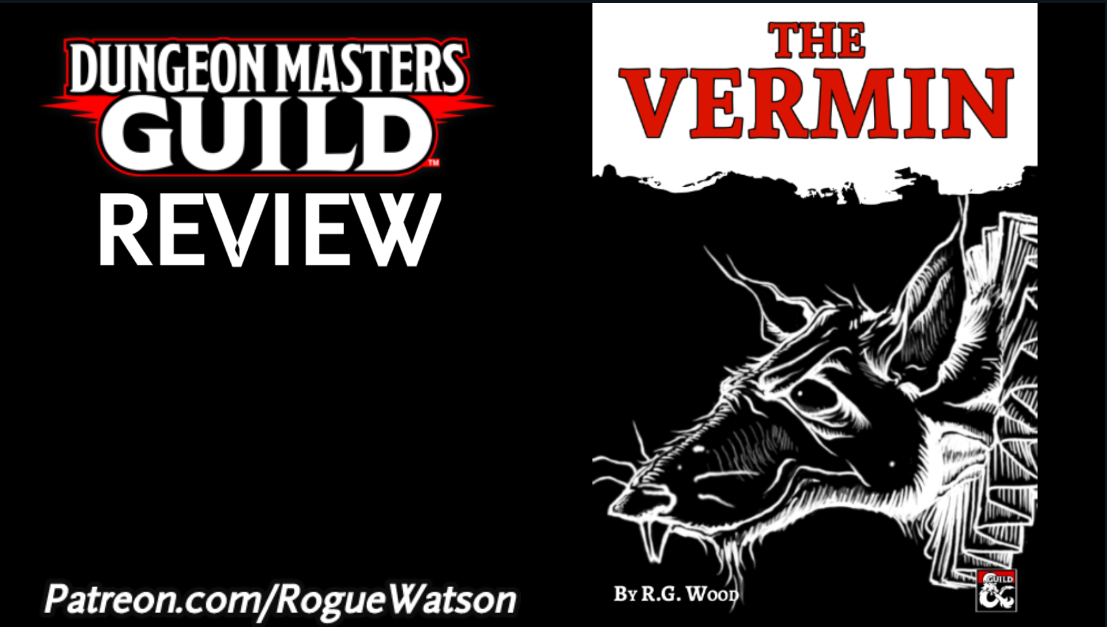 A review copy of “The Vermin” was provided by the publisher. Find more DMs Guild Reviews on my website and YouTube channel.

The Vermin is all about ratfolk, nasty low-level creatures that are typically found in sewers and tunnels beneath cities. The supplement continues the designer’s short but attractive monochrome style from The Enchanted, expanding to include an entire ratfolk lair.

If you’re like me you might’ve thought ratfolk were already a thing in Dungeons & Dragons Fifth Edition. Wererats yes, ratfolk, not so much. According to The Vermin, ratfolk are small, conniving humanoids that embody all the worst qualities of rats: hidden, swarming, and disease-ridden.

At CR 1/8 ratfolk make a solid replacement for low-level fodder like goblins and kobolds. They live primarily underneath cities, carving out sewers and ancient forgotten sites, and living amongst refuse and rotting corpses. Charming little buggers!

Ratfolk come in four different statblocks. The Ratfolk Skulk can deal an extra 1d6 sneak attack, while the Wrack can vomit acid damage on enemies, poisoning them. All rats share the Squirm trait, allowing two rats to occupy the same space, and granting them the ability to take the Dodge action as a Bonus Action. While it could be tricky to represent multiple tokens or figures in a single space, the added defensive ability makes ratfolk more challenging to battle within the tight tunnels of their lairs. 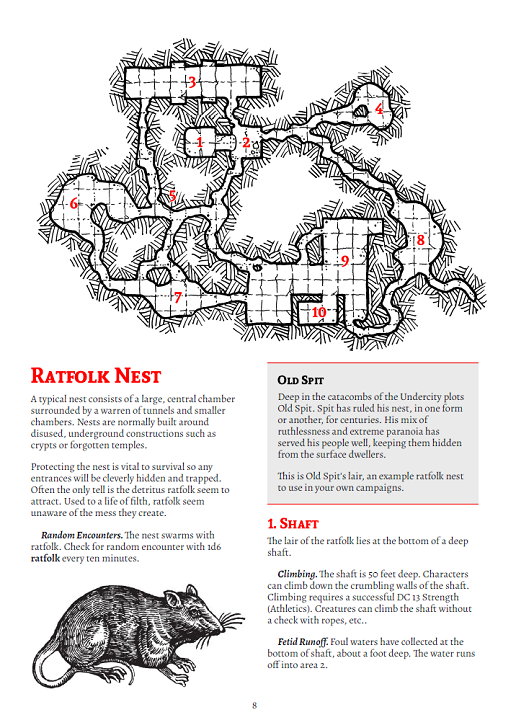 Ratfolk are typically led by a Rat King, a supremely nasty amalgamation of several rats fused together. The Rat King has some psychic powers, calling nearby ratfolks to its defense, blasting enemies with psychic damage, and empowering nearby ratfolk (as per the Bless spell). The Rat King also has Legendary Actions  and an average of 90 hit points, making it an epic boss fight for low-level PCs – though I’m side-eyeing that challenge rating of 1.

The Vermin also includes a small but well-designed lair full of ratfolk. The ratfolk nest lies at the bottom of a 50-ft shaft (an empty well in a town makes the most sense) and features winding tunnels full of ratfolk. An old armory includes an animated armor (the ratfolk steer clear), while curious PCs could pick up hints, clues, and other information the rats have squirreled away in their makeshift library.

A “plague shrine” features a diseased corpse hanging from the ceiling, dealing poison damage to anyone near it. If you manage to skip ahead to the boss encounter, the rat king will summon all the ratfolk you missed for a largescale showdown. There’s no role-playing or socializing here, but given the size and scope of the dungeon and the supplement, I’m perfectly okay with the straightforward yet satisfying design.

The Verdict: With multiple statblocks and a well-designed lair, The Vermin packs a lot of helpful content into a tiny but attractive package.

A review copy of “The Vermin” was provided by the publisher. Find more DMs Guild Reviews on my website and YouTube channel.