DM guide on how to identify, analyze, and incorporate prophecies into a D&D campaign.

A review copy of “Prophecies as Narrative Tools” was provided by the publisher. Find more DMs Guild Reviews on my website and YouTube channel.

Prophecies are classic narrative devices in adventures, from the Chosen One in The Matrix, Star Wars prequels, and countless JRPGs, to the Evil Approaches prophecy that serves as a background for the entire Cthulhu Mythos. Prophecies as Narrative Tools explains how to incorporate prophecies into your D&D campaign.

The 14-page supplement features a lengthy introduction that breaks down each element of a prophecy, and what functions it serves. Prophecies can be used to transmit information, warn of impending danger, deceive the heroes, or provide an intriguing level of worldbuilding.

The designer identifies three primary kinds of prophecies. Here Be The Future covers unavoidable fate. A Hero Rises is the classic Chosen One tale, while Evil Approaches tells of impending doom that could still be prevented.

Prophecies are often murky, with their true intent hidden behind flowery language. Deciphering them is often a puzzle unto itself. The supplement helpfully breaks down prophecies into different elements, such as the actors or prophet, the inciting incidents or conditions, and the resulting events.

Multiple tables are provided to help craft your own prophecy part-by-part, as well as the motivations behind the prophet. Prophecies can even be deceptive, as is the case with one of the samples provided in the One Page Prophecies section. 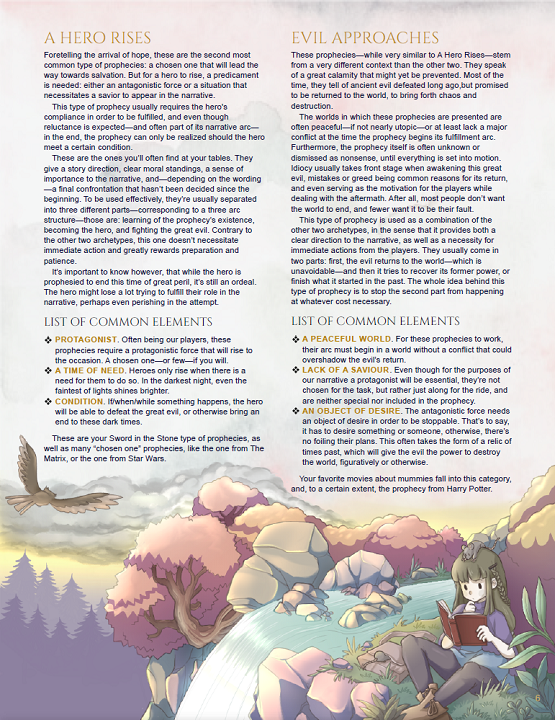 The designer wisely avoids listing dozens of sample prophecies, as prophecies are intricately entwined with a world and its narrative. Instead we’re given lengthier samples for each of the three main prophecy types, explaining how to break them down and customize them.

The Evil Approaches example is An Eerie Song, a dark prophecy given by a mermaid about a world-conquering undead ruler who must not sit back on its throne. We’re given clues as to how to change and manipulate each element of this prophecy to suit our own ends.

Color-coding each element and sentence fragment is a huge help in visualizing how to improve and evolve a prophecy. In fact the entire supplement features one of the best layouts I’ve ever seen, with attractive colors, bullet points, and tables, and incredible original artwork by artist Kyo Smash.

This little DM supplement looks better than most larger-priced books with over ten times the word count. That’s not to discredit how well the written content is in Prophecies as Narrative Tools, but to accentuate how much good art and production can elevate a good product into a must-buy.

The Verdict: Prophecies as Narrative Tools brilliantly and intuitively introduces, identifies, and deconstructs multiple kinds of prophecies to include in your D&D campaign.

A review copy of “Prophecies as Narrative Tools” was provided by the publisher. Find more DMs Guild Reviews on my website and YouTube channel.