Deal with train robbers and escaped monsters aboard a speeding locomotive in this Western-Horror one-shot adventure for 3rd level. 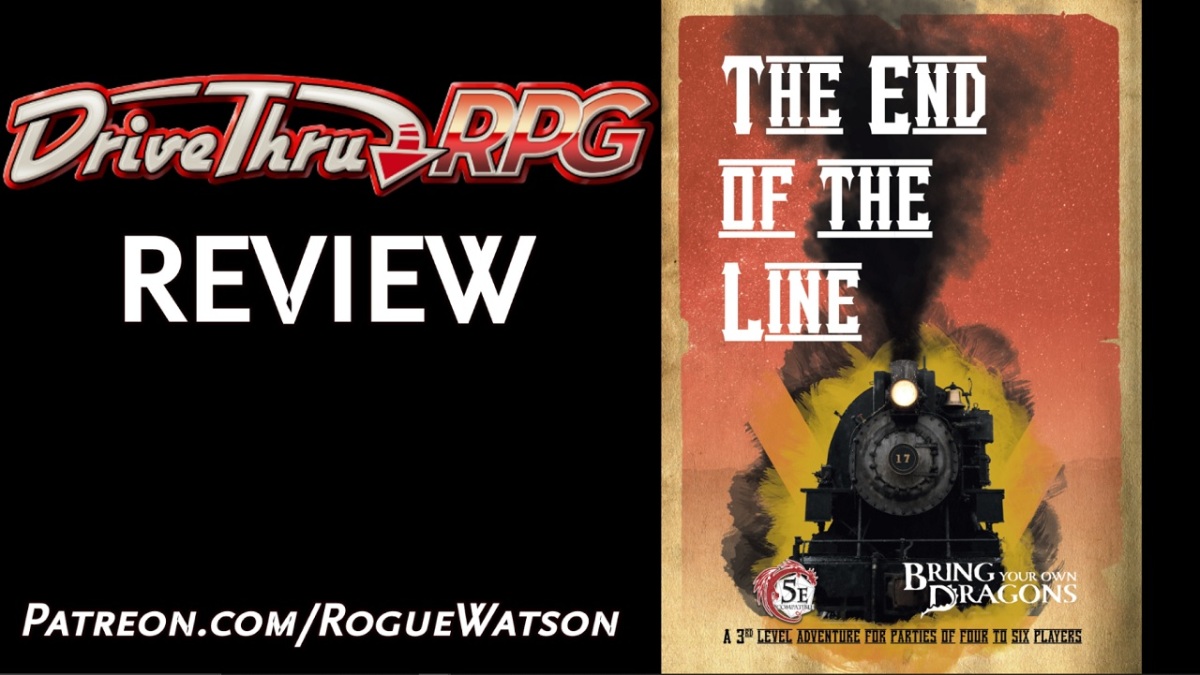 A review copy of “The End of the Line” was provided by the publisher. Find more RPG reviews on my website and YouTube channel.

Designed by: Bring Your Own Dragons

“The End of the Line” is one of my favorite songs from the Traveling Wilburys, an awesome folk-rock group from the late 80s that included Bob Dylan and George Harrison. The End of the Line is also an western-themed and horror-themed one-shot adventure that takes place almost entirely on a speeding train.

The End of the Line is designed for D&D 5e, and a party of level three characters. It’s obviously setting-agnostic, as I don’t think steam-powered locomotives normally exist in the Forgotten Realms (and in Eberron they’re powered by magic). But if you’re willing to make that concession, or interested in playing it as a self-contained one-shot, you’ll find a satisfying, action-heavy, train-based dungeon crawl.

The adventure doesn’t have much in the way of plot or characters. A woman named Luella is transporting some special cargo to another location via train, and hires the player character to help provide protection. The story probably should’ve began on the train itself, as there’s nothing to do in the opening saloon other than completely ruin the DM’s plans by noticing the outlaws pickpocketing Luella and stealing the key to the cargo containers.

Anytime a story absolutely needs a certain even to happen a certain way, that’s cause for concern. Players will always find ways to muck things up, and the DM (and the story designer) needs to account for that.

The one interesting choice players can make, if they’re more of a clandestine persuasion, is siding with Jesse the outlaw leader. Jesse will promise them a cut of the impending robbery, in exchange for them standing down when the action starts. It’s a nice choice, but it would also make the first half of the adventure rather boring.

Soon after the train takes off, the outlaws strike, robbing passengers in each car. The party is expected to interfere, but sadly there aren’t any options for social situations. I would’ve loved to at least see names and personality traits for the outlaws and passengers, and a few complicated scenes, rather than just relying on simple combat encounters.

I did like seeing a variety of train car encounters, however. Some cars feature outlaws robbing passengers, while another has a surly passenger beating up an outlaw! Other cars are carrying cargo, such as logs or crates, that pose environmental hazards. The party also has multiple opportunities to clamber onto the roof to deal with other outlaws along with the rain-slick roofs and dark tunnels threatening to send everyone tumbling over.

After passing through several cars dealing with outlaws (or joining them, I suppose), we find Jesse as he unlocks one of the special cargo crates. He’s quickly killed in an awesomely gruesome scene as a nasty undead creature emerges to rip his skin off, creating both a zombie and a skin crawler (darkmantle) out of the former bandit leader as it flees further up the train.

I love how seamlessly we transition from standard train robbery into terrifying, Alien-like containment horror. The creature uses the Wraith statblock and wrecks havoc in a few cars, creating more undead minions such as zombies and shadows.

Disappointingly, the monster is eventually cornered by itself in the coal carriage as a final boss fight. Although it’s CR 4, it lacks multi-attack and Legendary Actions. At least give it some of its minions!

After defeating the creature, the party has to then deal with the train. The conductor lies dying as the train careens toward its destination. The two-part climax ends in a skill challenge as the party uses different skills and abilities to slow or regain control of the train. Four different epilogues are provided depending on how many successes the party earns, which is the right way to do a skill challenge, including the possibility of everyone dying in a fiery explosive derailment. Hey, at least it’s memorable!

The adventure includes maps of each train car, but they’re provided as blueprint schematics, literally on blue graph paper with thick white line drawings. Perfectly fine for DM notes and table reference, but not good enough for virtual tabletops.

Despite some complaints about the setup and story, there’s a lot of potential for fun action and horror-moments, and I absolutely want to see more adventures that take place in such unique and memorable settings.

The Verdict: The End of the line effectively combines Western and Horror themes with a robbery and an escaped monster, all aboard a speeding train.

A review copy of “The End of the Line” was provided by the publisher. Find more RPG reviews on my website and YouTube channel.