After a lengthy battle with a small horde of zombies in a sacrificial chamber last week, the team gets a much quieter aftermath. Returning to the Temple of Savras results in a sizable monetary award of 20gp each, as well as the opportunity to ask Savras for guidance on several different characters, locations, and objects that our party is searching for.

The Savras ritual takes head priest Zitembe a full 24 hours, however. With evening approaching, our party returned to the Thundering Lizard Inn, where they could properly interview all of the guides.

The Thundering Lizard was alive with activity. The innkeeper had been able to contact most, though not all, of the Port Nyanzaru jungle guides. Eku and Salida were currently out of the city on previous expeditions, but the rest were found there in the bar area.

The one-armed dwarf Hew Hackinstone approached his old friend Therin. Hew was a disheveled mess, obsessed with returning to Wyrmheart Mine. His previous expedition had ended in disaster, and he was the only survivor when his crew discovered it had become the lair of a red dragon named Tinder. 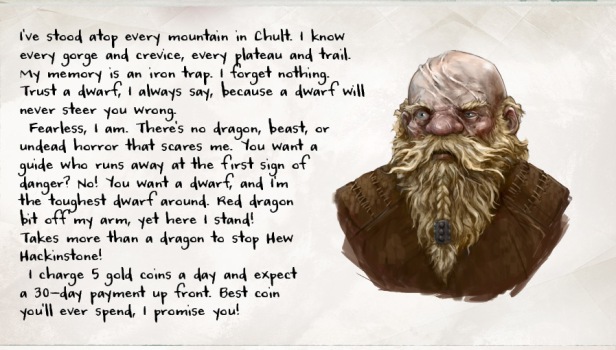 He pleaded to Therin to travel there, defeat the dragon, and split the spoils. More than that, he had discovered an ancient, but active dwarven forge connected via an underground mine shaft. It had been taken over by Firenewts, however.

This was further confirmed by another dwarven guide, Musharib, an albino dwarf who sadly recounted his tale of his people being driven out of their dwarven forge home, Hrakhamar, due to volcanic eruptions. He claimed his people once lived in peace with the Shield Dwarves of the mine, but now the Firenewts had enslaved some of his people, while the rest tried to survive in the surrounding jungle.

The two dwarven guides are at odds. Musharib is kind, pathetic, and desperate to help his people, while Hew aggressively lays claim to both the mine and the forge.

Therin, and the party, ultimately wanted to help both dwarves. Hew revealed that the Mine is very far away, as I would show them on their player’s map of Chult each time the PCs learned of a new location. He suggested they get a boat and sail around the coast rather than journey through the full jungle.

The PCs know they will have access to a boat, eventually. Ortimay has agreed to give them her boat if they can find the ruins of Orolunga and Nangalore first. Hew agreed to wait in the city until they return, ready to leave on their ship excursion. Presumably they’ll be picking up Musharib as well, which could lead to some interesting drama. Assuming they both survive.

Next the players were drawn to Azaka Stormfang, whom I had arm wrestling a bulky dude to show off her physical prowess and confidence. Azaka is a fun character that the PCs immediately warmed up to. She’s very blunt and straight-forward, and has little respect for those who can’t take care of themselves. She liked the party right away, particularly as George immediately sat down for an arm wrestling match – beating her with an impressive STR check.

Agreeing to her personal quest to waive her fee is a bit of a no-brainer, especially because Firefinger is fairly close to Port Nyanzaru (although, it’s on a different river than Camp Righteous). The PCs didn’t ask very many follow-up questions about it or her, a testament to how much they liked her. In fact, it sounds like they’ll take her right away when they go to the jungle, while hitting up both Camp Righteous and Firefinger.

Rokah isn’t a guide, but he wanted to meet with Mannix after the chance meeting at the Temple of Savras earlier that day. Rokah did have access to a pair of guides, two tabaxi siblings named River Mist and Flask of Wine. Rokah is willing to call in a debt from them and offer their jungle guide services for free, provided the PCs complete a little task: Get him into Fort Beluarian, where he can search for any evidence of collusion between the Flaming Fist mercs and the local pirates of Chult.

The party accepted the quest. Mannix picked up that Rokah works for the Zhentarim. This party, unlike our last one in Storm King’s Thunder, has no real beef with the criminal organization. I also teased that it’s under new management: Bryseis, one of the player characters from our Storm King’s Thunder campaign.

The PCs had already heard rumors about some kind of possible shenanigans between the pirates and the mercs. Captain Ortimay of the Brazen Pegasus was willing to ferry them across the bay to the Fort, for a nominal fee. Rokah jumped at the chance, suggesting they leave first thing in the morning.

My players are adamant about doing the dinosaur race, but it’s not for another two days. Plenty of time to go to the Fort, and return to town to meet up with Zitembe for the ritual results. Assuming everything goes according to plan, of course. 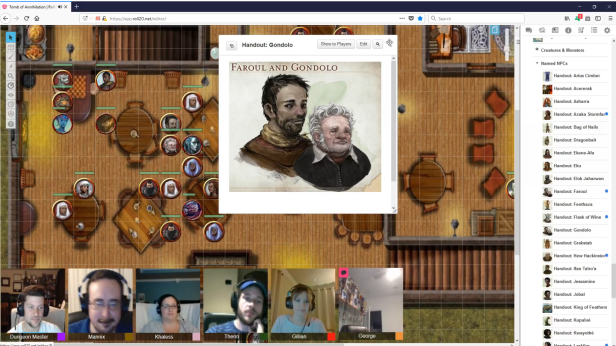 The final guides were Faroul and Gondolo. I had a lot of fun role-playing these entitled assholes, constantly trying to cut a deal or treat being jungle guides as their latest business plan. The PCs did pick up on the most important detail – they had a treasure map in their possession.

What followed was the most player interaction we had all session. This session was a lot of dialogue and a lot of me acting in different voices. It was fun to step back slightly and let my players work out a little plan.

Gillian used her charm to hand Faroul her bagpipes and dance with Gondolo. Khaless swiped the map, and Mannix used his Forgery Kit to quickly make a copy. It was a resounding success, with our pair of city boys none the wiser. Mannix even offered to buy the copy-map for 10 gold, but Faroul balked, and let them walk away.

The PCs were rewarded with a new location on their map, Needle’s Bones, the supposed lair of a dead green dragon.

Almost the entire session was relegated to a single scene in a bar, and as one of my players mentioned, this may be the first time ever I’ve DM’d a session of D&D without any combat. I think it was a lot of fun expanding on the guides and creating fun little role-playing scenes rather than simple one-on-one interviews, and now my PCs have gained a ton of new locations and quests.

Our first full day in Port Nyanzaru is complete. Next week: Fort Beluarian!

One thought on “Tomb of Annihilation Session 5 Recap”