With half the party captured by pterafolk, the rest mount a daring rescue attempt in and around the cliffs of Mbala.

After a nasty cliffside fight with a group of pterafolk, the party was faced with dilemma: half of their own were captured and stuck inside the nest, hundreds of feet above the jungle. Cue the not-so-stealthy rescue attempt!

Mannix and George were both flown to the pterafolk nest on the other side of the cliff. Mannix was dropped into the back of the cave surrounded by pterafolk but otherwise not in immediate danger. The pterafolk planned on saving them for a later meal to feed their young. He lit a wukka nut and saw a potential escape route in a tunnel, but it was 20-feet above him, and the light made it difficult to do anything stealthy.

George wasn’t far behind, and was far more aggressive. His captor flew into the mouth of the cave and George attacked, nearly killing the already heavily wounded pteradactyl-creature. All the pterafolk in the nest, a good half-dozen or more, turned their attention toward George, who was also heavily wounded from the previous fight.

George also couldn’t see in the cave, but did notice Mannix’s light. He ran ahead, right into a large nest, which he then tried to light on fire using a tinderbox. Points for creativity, but trying to start a fire when surrounded by enemies isn’t going to work out very well. The monstrous pterafolk dived on top of George, quickly downing him and dragging him to the same nest as Mannix. 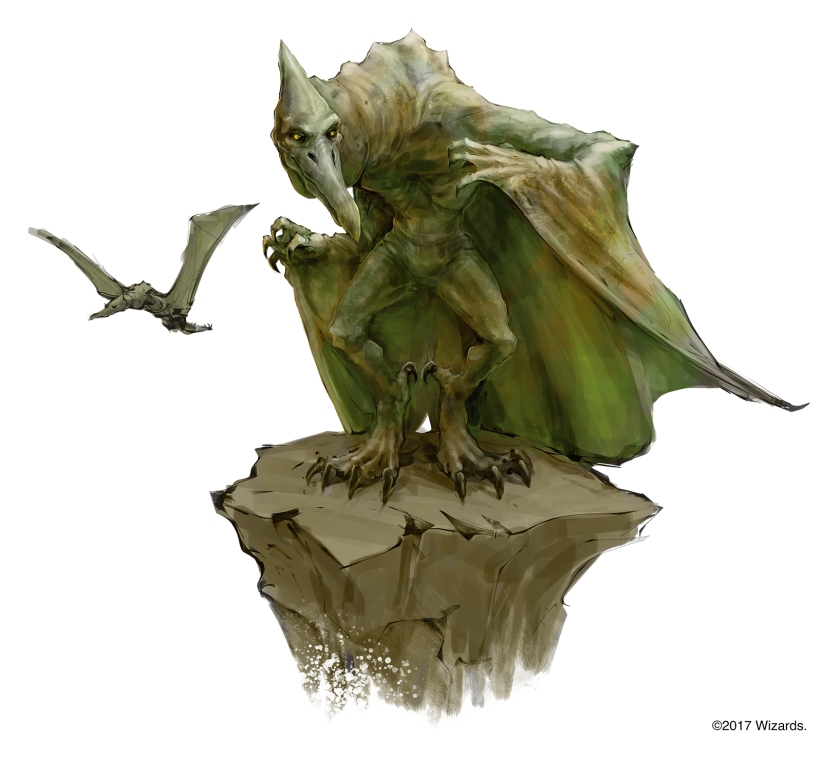 Mannix revived George using the last of his healing ointment. They were effectively trapped.

Meanwhile the other half of the party had seen their compatriots flown off. They couldn’t directly follow them – or could they? They continued along the path to the top of Mbala, noting a rotting gated entrance stacked with sun-bleached skulls.

Therin was still in Spider form. Khaless hopped on and the two carefully skittered along the side of the plateau all the way around until they found the nest.

At this moment, the party was now divided into three separate groups. Mannix and George in the nest cave, Therin and Khaless creeping up to the cave entrance, and Gillian, the tabaxi, and Inete entering the the ruins of Mbala.

A once grand city had stood upon the large plateau, now little more than ruins. Only two structures remained, an ominous well plunging into darkness, and an animal hide hut belonging to an old woman.

She introduced herself to Gillian as Nanny Pu’pu, the village healer. She bemoaned the coming of the pterafolk for destroying the village. She agreed to help heal Inete, who had been severely wounded from the earlier battle, if Gillian and company could deal with the pterafolk. She pointed her to the southern side of the plateau, where Gillian found a small, cramped tunnel leading straight down into the nest – the same hidden chute Mannix had seen above him.

Gillian made it down the tunnel around the same time as Therin-spider and Khaless were creeping inside from the outer entrance. A successful stealth check got them inside quietly, but Therin failed the second check once inside, alerting the pterafolk to a giant spider incursion.

We’ve had a number of epic fights so far but this one was easily the most harrowing. The party was uniquely separated, though still fairly close together. They attacked the quartet of pterafolk in the nest between them, quickly killing the pair who were wounded and had captured Mannix and George. 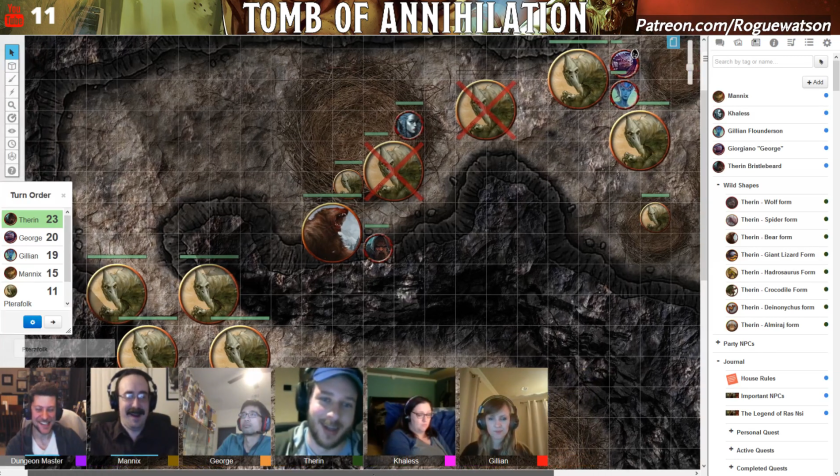 Pterafolk are pure glass cannons; they have fairly low AC and HP but pack a serious punch with a shocking three multiattack every round. I decided to just stick to claws and bite instead of having them wield their javelins, since the party was attacking them in their home where they are more vulnerable.

The pterafolk cut into the party and I had the rolls of my life, critting no less than five or six times over the course of this lengthy battle. At one point Therin, having lost his spider form, shaped into his bear form and ran up to the cave entrance to try and block the four (!) pterafolk from getting inside. His bear form only lasted a single round. In the next round I nearly took him down, putting him at 3 hp. Gillian would also go down, with everyone else hovering around 30-50% hit points.

It was the closest we’ve ever come to a total party wipe. But the party persevered, broken and bleeding as they were (both Gillian and George would suffer Lasting Injuries).

They noted a small treasure cache in the biggest nest, grabbing some gold, silver, a potion of greater healing, a silvered dagger, and a magical pair of jeweled lenses.

The tabaxi threw down a rope from the chute and the party scrambled back up. This was one of the few fights were the party did not have any of their NPC allies, and they definitely felt it.

At the top of the summit the party were able to get their bearings and look out across the jungles of Chult. I likened this to activating one of the regional towers in The Legend of Zelda: Breath of the Wild, revealing a large number of hexes around them as well as revealing three nearby locations: the ruined temple Orolunga to the west, the floating Heart of Ubtao to the southeast, and a mysterious shipwreck in the trees to the south. 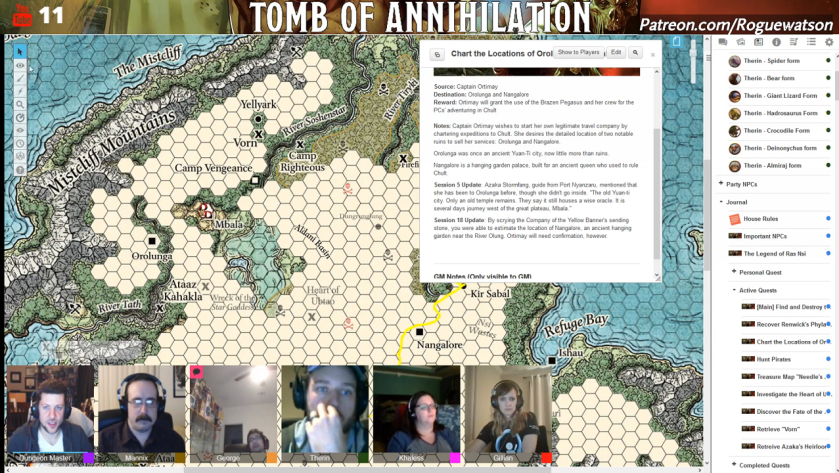 They were in dire need of healing after that battle, and Gillian introduced them to the friendly old healer woman. But something felt a bit off. The woman seemed nervous that they had returned so soon, and Mannix could hear muffled whimpering coming from inside the hut- where Gillian had dropped off Inete.

Khaless and the tabaxi moved around while Mannix kept her talking. The tabaxi failed their stealth check but Khaless made it inside. She saw [REDACTED], and responded by sneaking back outside and plunging her rapier into the old woman’s back!

What did Khaless see, and who, or what is this friendly old lady? Find out next week!

One thought on “Tomb of Annihilation Session 20 Recap”