Steal from a visiting noble who has everything to hide in this one-shot heist set in Waterdeep. 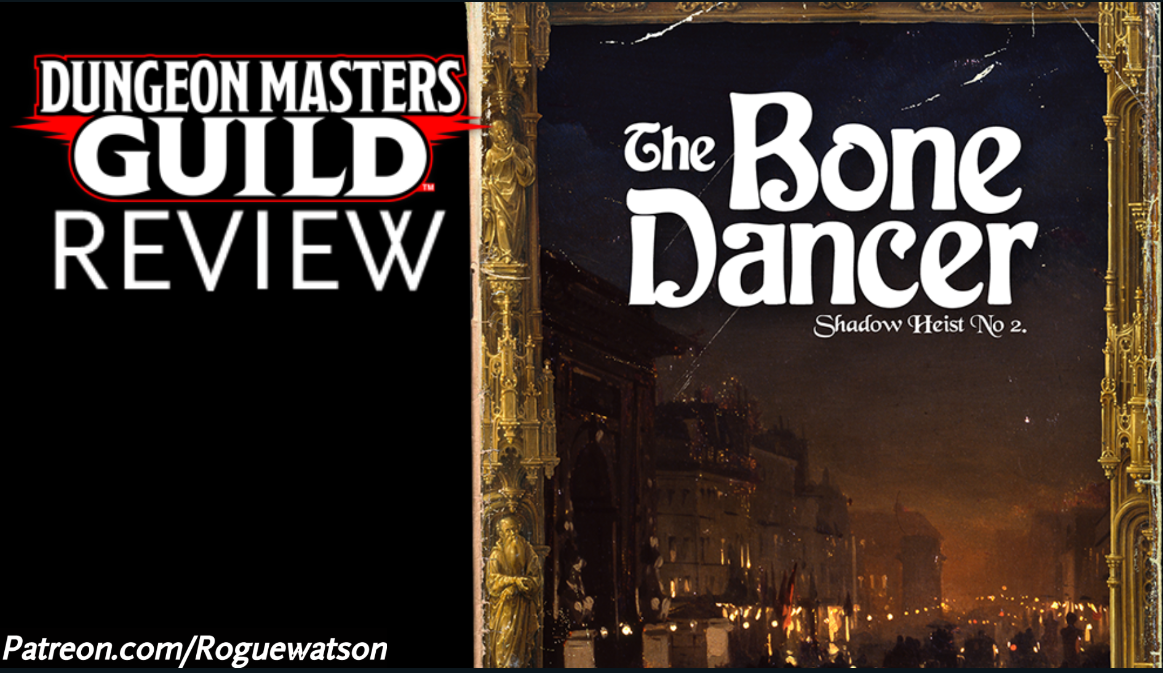 As part of the Shadow Heist series, “The Bone Dancer” is structured and presented in the same way as “The Great Wyrm Theft.” The adventure is dressed as a weathered, dime-store pulp novel using painted portraits for character art. The included maps are the same bare-bones sketchings we saw in the first heist. Separate player maps are included but the maps aren’t of a quality that I would want to use on a tabletop, virtual or otherwise.

Once again we’re not given proper level ranges, but the person the PCs need to steal from is a CR 7 warlock with a DC 18 CON gas trip that can knock overeager thieves unconscious. Rewards for completing the adventure and the optional side objectives are worth hundreds of gold.

The adventure is divided into three parts. Part one details the mission background, objectives, and rewards, as well as what pieces of information the characters can learn about their mark, Borgo Schaller. Unbeknownst to everyone, Schaller is really a Bone Dancer, which is apparently a special kind of monstrous skeleton that can wear bodies like we wear clothes.

Functionally Schaller is a Warlock of the Fiend with fairly mundane plans to create an organized crime front between he, Baldur’s Gate, and Waterdeep. He’s in Waterdeep to make the first arrangements to his co-conspirator in the city, and it’s there the PCs are sent by their thieves guild contacts to copy the letters. The Boar’s Head Inn has much less going on than the party mansion in “The Great Wyrm Theft.” The areas of the Inn are detailed in part two, few of which are of any real consequence. The halfling innkeeper’s room can be raided and there’s at least one hilariously awesome magic item that can be found in the inn’s spire, but otherwise the only notable location is Schaller’s room.

Schaller keeps the MacGuffin in a locked and trapped chest. The trap is a gas trap with some fairly nasty consequences – DC 18 CON saving throw or fall unconcious. Schaller has a Quasit familiar guarding the room who can tie up the entire party if they fail, or at the very least telepathically warn Schaller. This could create some interesting consequences as Schaller will try to get the PCs arrested as thieves, but if they find his other skin suits in the chest, he’ll try to kill them instead.

Unlike “The Great Wyrm Theft,” this one does feature some interesting consequences depending on the PCs’ actions, detailed in the timeline section of part three. Another interesting monkey wrench is that Schaller is being tailed by an agent from Baldur’s Gate who’s busy doing her own sleuthing, disguised as a bard. The PCs could try and enlist her aid, confront her, or simply avoid her.

Although the timeline isn’t as interesting and it lacks a fun list of NPCs, “The Bone Dancer” is a slight improvement over the first one-shot Waterdeep heist, thanks to the twist involving Schaller, and the more challenging trapped and guarded chest. Because of the difficulty of the DC checks and the Warlock, I would put this somewhere in the low to mid-Tier 2 range, depending on the challenge level you’re looking for.

The Verdict: It Suffers from the same flaws as the first heist, but “The Bone Dancer” features a more interesting victim to steal from, as well as proper reactions and consequences from NPCs.