This review has been sponsored by the publisher. Find more reviews on my website and YouTube channel.

The sun never shines in Icewind Dale. Tiamat and the elder elemental princes walk a burning world. Baldur’s gate has been dragged into hell, and demon lords have ravaged the Underdark.

It’s the Doomed Forgotten Realms, where every 5e campaign failed and evil reigns!

Sword Coast Gazetteer is a 70-page sourcebook detailing this uniquely apocalyptic setting that was first teased in the level one mini-adventure, Academy of Adventure, then thoroughly explored in the full-length campaign, Rise of Vecna.

You don’t need to read Rise of Vecna to understand the Doomed Forgotten Realms (though I would certainly recommend it). Sword Coast Gazetteer includes a full timeline of events, including the history of arch-lich Vecna’s ascension, and full color maps of the Sword Coast, parts of which are now literally on fire.

While Rise of Vecna was a campaign book, the Gazetteer is a sourcebook, focusing on notable locations and factions, along with some excellent story ideas and campaign hooks. It’s an effective expansion for Rise of Vecna, as well as a tool for Dungeon Masters to craft their own campaign within this dark world.

The six factions detailed in Chapter Two take a page from the Group Patrons in Tasha’s Cauldron of Everything, detailing each faction’s history and leader, as well as how to ascend the individual ranks and the benefits one can expect.

And since this is the Doomed Forgotten Realms, the factions we can work with (or against) include the Cult of the Dragon, the Cult of the Elder Elemental Eye, and Zariel’s Legion. These evil factions exist in an intriguing cold war with one another, and some (or all) may be the world’s only hope against Vecna’s rule.

The only faction that’s semi good-aligned are the Drow-dominant Bregan D’Aerthe, who now operate as a massive fleet of ships roaming the Sea of Swords, and a convenient means of getting around the world for our players.

Chapter Three explores the major and minor locations around the Doomed Forgotten Realms. 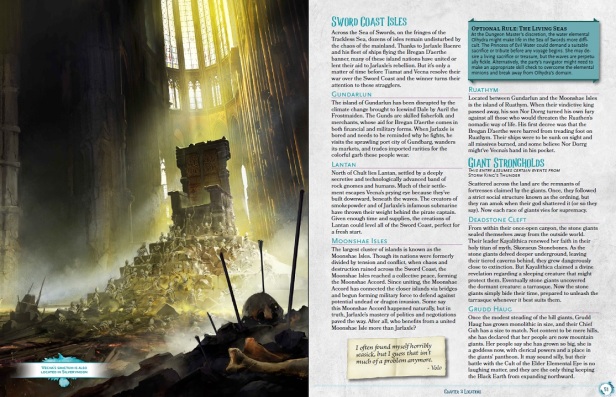 Baldur’s Gate was dragged into the abyss (along with Elturel) and replaced by Zariel’s fortress, Helldoor’s Gate. Neverwinter winked out of existence, replaced by its shadowy twin Evernight, home to all manner of undead. Silverymoon is now home to mind flayers, as well as the chained god Tharizdun. And Tiamat reigns from her soaring citadel with thousands of dragons at her disposal.

Each location offers several adventure ideas for different tiers of play. Set fire to the docks of Luskan for the rebellious Jarlaxle. Stop the rampaging, corrupted Walking Statues in Waterdeep. Recover a weapon of mass destruction from deep within the undead city of Evernight.

My only complaint is the focus on urban environments at the expense of everywhere else. The undead city of Evernight sounds awesome, but what’s going on in Neverwinter Wood? What kind of encounters can we expect while traveling through each region? The closest we get is the former Dessarin Valley, which has been transformed into the Throne of Primordial Unity, yet it’s still described as one massive city with distinct wards rather than a fully terraformed region.

Chapter Four is only four pages, but stuffed with cool story ideas for crafting a campaign in the Doomed Forgotten Realms. None are directly tied to the main quest in Rise of Vecna, but could be used as fun side-ventures, or for creating an entirely different main quest throughout each tier of play.

Campaign hooks included allying with the displaced dwarves and the non-evil elementals of the Plane of Earth, preventing Artus Cimber and the Ring of Winter from falling into the many wrong hands (and claws and tentacles) of this world, or working with the mind flayers and elemental cultists to free Tharizdun in the hopes that he and Vecna destroy each other. Desperate times, desperate measures!

The final chapter explores thematically appropriate character options for players in the Doomed Forgotten Realms, including new subclasses, new player secrets, and re-themed backgrounds. Big thumbs up for adding even more immersive elements to this setting.

I’m especially fond of the Bard College of Elements, who weaves elemental songs for unique effects, and the Druid Circle of the Nine, which resembles a darkly twisted demonic warlock multiclass, complete with demon-bargains for their poor victims!

The Sword Coast Gazetteer does exactly what a sourcebook should do: make me excited to run the setting. There’s enough detail and information to get any DM started, but I would still recommend picking up Rise of Vecna for the complete Doomed Forgotten Realms package.

The Verdict: Doomed forgotten realms continues to be one of the most exciting, fresh, and wonderfully twisted ideas to come out of the DMs Guild, and the Sword Coast Gazetteer is a definitive sourcebook for running this uniquely apocalyptic 5e campaign setting.

This review has been sponsored by the publisher. Find more reviews on my website and YouTube channel.