Korinn is forced into a duel for control of her old blue dragonborn tribe.

The weather was bitterly cold but the air around us was electric. The entire warband of blue dragonborn had turned out. Many looked to Korinn like a returning savior, while others spat at her feet.

Unfortunately for us, Rygen was firmly in the latter camp. Despite Korinn’s attempts at diplomacy, only a test of strength would decide who would lead the tribe from here, and Rygen wasn’t going down without a fight.

We had taken turns bestowing various blessings, spells, and magical artifacts on our dragonborn sorcerer. She was nervous, but resolute.

A ring was formed around the two blue dragonborn. Rygen towered over his brethren, put his hands together and pulled them apart, lighting arcing between them until a blade of living lightning materialized in his hands.

“Step forward and face me in single combat, Korinn.”

[NOTE: This will be a shorter recap, as I was wholly absent for this entire session thanks to the flu]

This week we took the fight to the aggressive neighboring blue dragonborn tribe – Korinn’s tribe, forcing her into a duel for control of the warband.

After speaking with Prynos and learning more about their plight with the neighboring blue dragonborn, the gong proved too tempting.

To our credit, Bryseis summoned a brown bear to do the ringing, summoning the creature from her Bag of Tricks. The gong in turn summoned a collection of deadly icicles raining down upon the poor creature. Had we attempted it earlier, it would’ve rained down those remorhaz from above.

With nothing left for us at Great Worm Cavern we made our way north, letting Halfred track some dragonborn footprints in the snow. Halfred was able to identity a scouting party, not far from our current position. 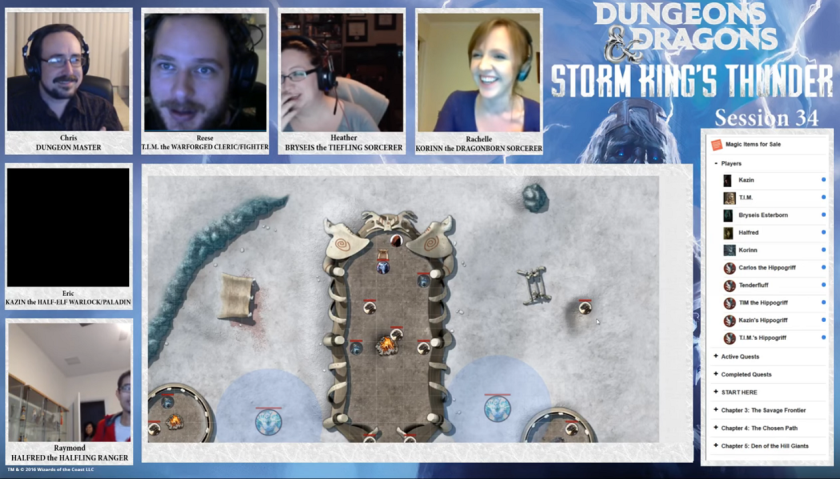 We kept to our original direction, and soon came across a warband encampment, with several tents set up. We debated on how to approach. Naturally, Korinn wanted to approach diplomatically.

Korinn spotted a dragonborn she recognized patrolling outside. She and Halfred worked out a plan. She wrote a bit of a love note for Halfred to drop off, luring the guard away from the camp. Halfred did his best impression of a large bird as he dropped off the note.

The plan worked, the dragonborn guard wearily sauntered over, and Korinn stepped out from behind the boulder. She turned her charm up to 11 (Crit on the CHA roll). The poor bastard instantly fell madly in love with her.

He revealed exactly what we had feared – this tribe had been tainted and manipulated by the evil blue dragon who plagued us. He admitted that she held a powerful sway over the entire tribe, whether magical or spiritual we weren’t sure, but while she was around them they couldn’t resist.

Without her active presence, though, about half of them weren’t quite on board with their new genocidal pastimes. Korinn’s new beau went and gathered the resistance and together we all formed a plan – which involved a one-on-one duel between Korinn and Rygen, the leader of the tribe.

As we made our way to the camp Bryseis polymorphed her summoned bear into a T-Rex as an impressive show of force (we later realized that you could only polymorph something to the same or lesser CR value). The DM had a clever way of addressing this by having her Wild Magic Surge go off, producing a random unicorn which simply ran away in fear, heh.

Despite this aggressive approach, Korinn still attempted diplomacy, wishing to heal her tribe nonviolently, if at all possible. 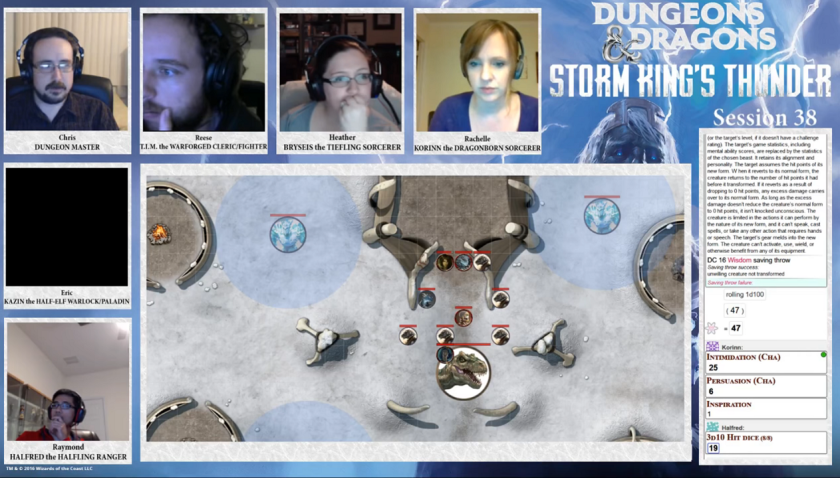 Korinn’s words were winning over most of them except, notably, Rygen. He and the other dragonborn insisted that Korinn submit to a duel.

We did get some set up time before the duel. A chance to Short Rest and cast buff spells on Korinn. Kazin used Shield of Faith, Bryseis smoked the Yondalla’s delight and gave Korinn the Gem of Brightness and Stunning Spores, and T.I.M. cast Bless. Korinn cast Haste on herself. We’re a very buff-happy party.

Rygen started things off by materializing a blade made out of lightning. Korinn won the initiative battle and surrounded Rygen in a ringed Wall of Fire.

Rygen was no spring chicken, however. He responded by casting Absorb Elements as a reaction, lessening the damage and adding to his own melee attacks.

As it requires concentration, the Wall of Fire should’ve canceled out her Haste, but they missed that, and she launched some Stunning Spores. The spores didn’t do much initially but would prove very effective later.

Rygen launched himself out of the fire, taking some burning damage on the way. He raised his impressive lightning sword and –

Korinn had a nice one-two punch set up on her next turn using her magical horn artifact to blast Rygen backward back into the ring of fire. It took a little Bend Luck help from Bryseis but it was successful, knocking him back into the flames.

The combination of stunning spores and wall of fire proved way too much an effective combo, and Rygen fell. Korinn claimed the prize – a spiffy lightning-charged bracelet that seemed custom-built for her. The dragonborn cheered for their new leader.

A cloaked figure in the back suddenly revealed himself as a warforged, like T.I.M. it was not pleased at the outcome of the duel.  It summoned up three large creatures made of ice out of the ground, surrounding the area. Everyone roll initiative!

This time we had the might of the dragonborn army on our side, and they were more than willing to follow Korinn’s lead. 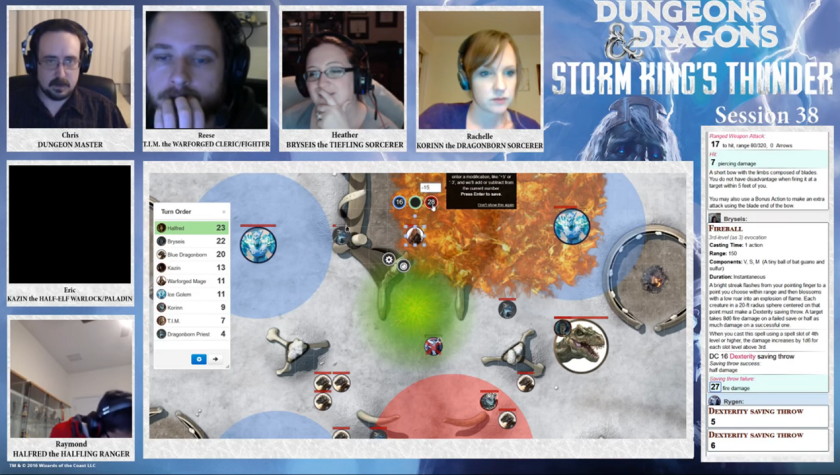 Halfred started by concentrating a blast of arrows at the warforged, sinking several arrows into its chest. Bryseis launched a Fireball into one of them. Fighting ice with fire is always a solid plan. Sure enough, it did double damage to the ice golem, and seared the warforged as well, followed by a liberal chomping from her T-Rex.

The dragonborn warband surged forward and went to town on the ice golems with their spears. Kazin used Dissonant Whispers to draw one of the ice golems off. It was immune to psychic damage but was still forced to retreat.

The warforged proved himself a powerful mage by casting Ice Storm, localized on most of us, killing several dragonborn and wounding the rest of us.

The ice golems went on a rampage, demolishing the dragonborn defenders, sometimes two at a time!

Korinn felt absolutely horrible. Her first act as leader was to watch her tribe die before her eyes. Korinn pleaded with them to fall back and let us finish them off. These dragonborn scrubs were not exactly eighth level adventurers.

One of the golems finally went down after a dragonborn priest got off a solid Guiding Bolt. He turned to look back at Korinn in triumph, only to have a large jagged piece of ice lodge in his chest. The ice golem had exploded, causing an AOE blast of deadly icicles. Ouch.

At this point in the session it was getting late and we still had two healthy ice golems remaining (though we’d almost completely run out of dragonborn fodder). Next week – finish things up here and then hold a very solemn funeral for Korinn’s poor beleaguered tribe.