We make a deal with the ancient red dragon and journey to the Great Worm Cavern in search of the final relic.

We began to dig in the snow, searching for the missing relic that would slot perfectly into this ancient gong. Did it simply fall off? Prynos and a few of the white dragonborn watched us, curiosity beginning to overtake caution.

I wandered over the great winged serpent statue, searching for clues. A voice suddenly rang out in my mind.

“Hello, friend. You are a mind-speaker are you not?”

The voice was intrusive but not hostile. It was calm, so I replied in kind. It claimed to be the cave itself, and was concerned and protective of the refugee dragonborn that had taken up residence here.

The voice claimed the enemy blue dragonborn had been corrupted. The work of our blue dragon foe, no doubt. The voice wished for us to deal with them.

The cavern began to shake, and the voice grew concerned. “Oh dear. It’s been so long since anyone was here. They’re coming for you. Protect these innocents.”

The voice receded from our minds while chunks of ice crashed around us, and monstrous insectoid forms dropped in front of us.

This week we made multiple bargains with powerful forces in our quest to find the sixth and final Ostorian relic.

Our meeting with Klauth the ancient red dragon gave us many more questions than others. He knew about us, particularly about T.I.M.’s background as forged by our enemies. Bryseis mentioned the ancient blue dragon that was behind the Giant chaos, and Klauth flipped out. He remembered this particular dragon, and she was supposed to be dead.

Klauth couldn’t recall any specific details about our mutual blue dragon enemy, including, frustratingly, her damn name. Kazin offered to to do a little mind meld via Detect Thoughts.

Klauth acquiesced. I critically failed a saving throw, becoming enthralled by Klauth, which offered some fun bit of role-playing. I dove into his mind, racing back centuries to find a meeting between he, the white (whom he did remember and had personally killed), and the blue, who was, as usual, obscured by a lightning cloud.

I couldn’t really learn anything new – we already knew these three dragons fought the giant empire, the Ostorians, back in the day, and that our blue enemy was particularly cruel and malicious. She somehow sensed me doing all this and struck me with lighting (24 damage!) through the mind meld, and hurtling me back out. Ouch. 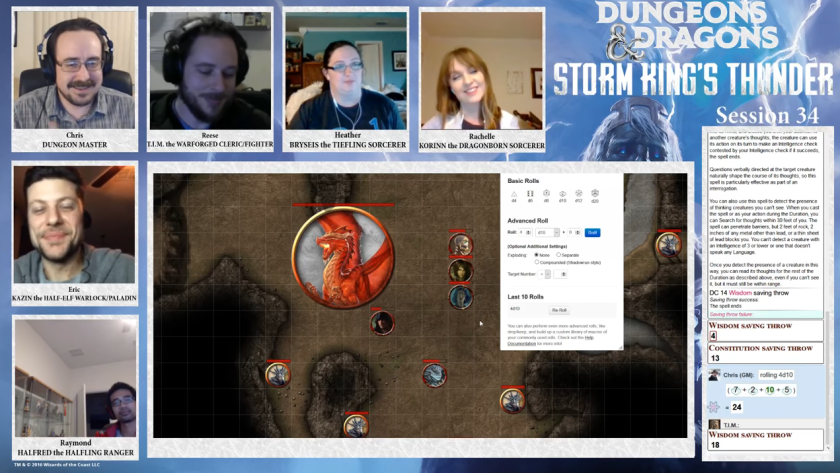 Klauth was equally pissed, and he tasked us with a mission: lay eyes on the blue dragon to confirm her existence. In return, he would reveal important information for each of us.

We can’t exactly trust an ancient red dragon, nor can we refuse him. And seeing our enemy at some point is probably part of our main quest anyway.

With Klauth’s, uh, blessing, we were sent on our way. We were granted the dragon cult’s airship to take us to our next destination: Great Worm Cavern, the location of the sixth and final Ostorian relic we need to access the Temple of the All-Father. Also where we had scheduled to meet with Harshnag after Morgur’s Mound.

The trip was uneventful and incredibly fast, since the airship doesn’t have to stop and land and rest. Take that hippogriffs! Within a day (Long rest, woo!) we arrived at the outskirts of the icy cavern.

We saw some totems and altars, which seems par for the course for these relic sites. No doubt some kind of barbarian tribe was around as well.

Bryseis summoned an animal from her Bag of Tricks, a yak, and sprinkled it with some pixie dust. The flying yak headed inside to warn us of any danger. By acting as juicy flying bait.

An arrow flew out of a nearby cave into the yak’s flank when he passed between the totems inside. Good job yak!

A voice called out that sounded like Korinn’s. A dragonborn! It was on the defensive, and spoke about how we were there to finish them off.

We let Korinn do most of the talking, as she has history with this area. Her former tribe had apparently come under sway of our blue dragon foe, and violently attacked this tribe of white dragonborn. A group emerged from the caves led by the bow-wielder Prynos. They were less an army and more a group of haggard refugees.

We talked them down, and even offered to help them with their war by going to the blue tribe and either reasoning with them or destroying them (probably requires the latter). We gave them some food and they let us inside to search for the relic.

The back of the cavern held a giant gong. It was missing a curved piece that fit inside an indentation. Was that the relic? We began searching in the snow, while I checked out the nearby winged serpent statue. Halfred noted several monstrosities directly above us, but they were on top of the cavern, and of no concern.

Suddenly a voice echoed in my mind. Not evil or hostile, but certainly mysterious. It claimed to be the cave, or “of the cave.” It was able to mentally speak to all of us at once. It confirmed we were pledging to help the displaced white dragonborn here, and in return it would locate the relic we were seeking. We had no idea who or what this voice was but it sounded helpful enough. The cave began to shake and the voice warned us that ‘they’ were coming. Ah, the monstrosities Halfred had detected. Apparently they could burrow through ice, dropping from the ceiling. We had a few seconds to prepare before a trio of remorhaz’s, an adult and two youths, dropped in front of us.

These weird molten insects hit hard, but we’d rested on the ship and were ready for them. One of them got a nasty fiery bite on Halfred, but Korinn twinned a Haste spell on Halfred and me and we went to town carving them up (my 10 ft range helped me dodge their fiery blood).

A few of the white dragonborn, including Prynos, joined us for the fight (ineffectually), while Korinn demolished them with a well-placed Lightning Bolt.

With the monstrous insects slain we have our next objective: seeking out and dealing with the blue dragonborn tribe – Korinn’s old clan.