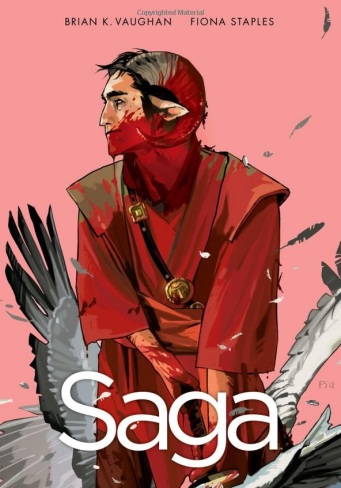 I’m one of those lame comic book fans that still mostly only thinks of Marvel/DC and superheroes (and Transformers!) when people mention comics. The fact is there are a ton of really fantastic sci-fi, fantasy, noir, etc themes and genres out there just waiting to be discovered by the intrepid comic fan.

I’m still in the tentative early stages of exploring comics beyond Marvel, and Image Comics’ Saga represents my first real steps outside of my comfort zone. I couldn’t be more impressed. Brian K. Vaughan’s fantastically relatable and grounded writing coming out of Fiona Staples’ insanely creative alien mouths is an amazing combination. Saga’s sophomore volume continues to teasingly expand the fascinating sci-fi world while keeping the focus on the burgeoning family dynamic and relationship between our two star-crossed lovers.

Volume 2 picks up right where the first volume left off: Marko’s parents magically teleported to his and Alana’s treehouse rocketship after he breaks the family sword. Marko introduces them to his wife, a winged Landfall woman that is his people’s sworn enemy, and they are understandably not amused. Before they can even sit down, Marko teleports down to the nearest planet, where his mom had banished the ghost teenager Izabel that was acting as baby Hazel’s babysitter and soul host. This is getting crazy to type and would be absolutely impossible to follow without reading the previous volume. Saga is definitely made in the mold of modern serialized television shows like Game of Thrones and The Walking Dead where the ongoing narrative assumes you’ve kept up since the beginning. 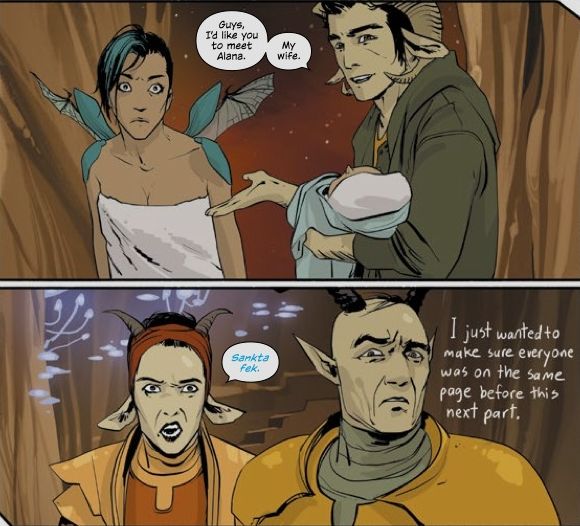 For the first few issues our family splits between Marko and his mom Kara on a hostile planet, and Alana and her father-in-law Barr back on the ship. Barr and Alana’s relationship starts out tense, but quickly warms up as he’s surprisingly accepting of her. His skill as an armorer comes in handy as he crafts Alana a form-fitting, bullet-resistant outfit, and the two quickly form an adorable bond.

Marko’s mom is decidedly less thrilled with their actions, and the two butt heads even while running into giant naked alien ogres and creepy witches with upside-down faces. Fiona Staples’ masterful art style particularly shines with exotic and crazy alien creatures and Volume 2 presents several delicious opportunities to show them off. Thanks to a trick dream sequence we also get to see more of my favorite alien from Volume 1, the spider-like The Stalk.

While Marko’s and Alana’s stories deal with the older generation, the hired bounty hunter The Will continues on his journey to hunt them down, and gets the majority of the B-story line. He’s still thinking about the underage slave girl back on Sextillion, the one he wanted to rescue but couldn’t. A representative of the Wreath council that hired him shows up to personally persuade him to continue the job, even while he wades in despair after The Stalk was mistakenly murdered by Prince Robot IV in the first volume. 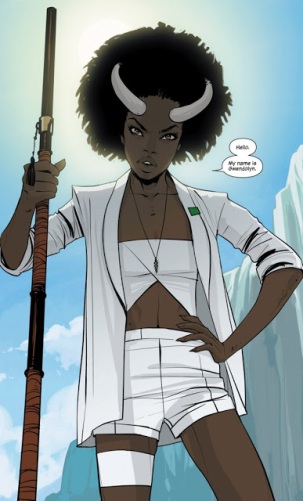 Her name is Gwendolyn, and she happens to be the ex-fiance of Marko, whom we’d only been teased about previously. She becomes a major cast member as she joins The Will and Lying Cat, helps rescue the slave girl using both her political acumen and magical skills, and reach the tree-ship right as all hell is breaking loose on the nearby orbiting planet.

Marko and Kara had found Izabel and returned to the ship, just in time to see Barr succumb to his terminal heart condition from pumping more magical power into the tree-ship. Poor Barr, and poor Alana for briefly meeting what would’ve been a fantastic grandfather to Hazel. And poor Kara I guess, though we’re not really given a chance to glimpse beneath her stony and aggressive exterior just yet.

The planet breaks apart and hatches a giant space creature. Gwendolyn, fueled by her own personal vengeance toward the man who spurned her, fires a missile at Marko and Alana. They decide to ram the missile, knowing it wouldn’t explode that close to its own ship. The missile bounces off and hits the space creature, who retaliates by blowing a hole in The Will’s ship. The entire sequence is action-packed and exciting, and a fantastic way for our two main storylines to converge without even having the two sets of characters meet each other.

That sequence happens in issue #11, so we get one more to end out the volume. Issue #12 finally returns to a major character from the first volume, Prince Robot IV, who has an old-school television set for a head. I’m honestly not sure if we’re suppose to sympathize or hate his character, and his backstory and situation seem complicated and much more embroiled in the wider politics of the ongoing war compared to the others. He essentially represents the winged Landfall faction’s hunt of Alana & Marko while The Will obviously represents Wreath’s. 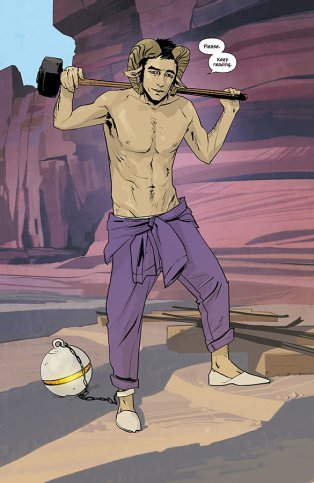 Prince Robot visits his only lead on his hunt for the AWOL prison guard Alana and escaped prisoner Marko – the author of the cheesy romance book that Alana was crazy about. There’s some fun flashback sequences in nearly every issue of Volume 2, including when Alana and Marko first met. Apparently she was super into this book that represented two different alien creatures coming together to love each other. Prince Robot hunts down the one-eyed author on a remote planet, and the two have a tense and interesting conversation on the nature of war, peace, and writing.

It’s revealed at the end that the whole situation is a bit of an Anne Frank/Inglorious Basterds moment, as Alana and company hide out upstairs during the exchange. Volume 1 ended with the cliffhanger of the grandparents appearing, and I was satisfied and intrigued that Volume 2 continues with another great lead-in to the next Volume, which I’ve already purchased!

Saga continues to impress, making me fall in love with its characters and reread nearly every page to absorb the fantastic art and writing as much as possible. I simply cannot recommend this series enough if you love really creative science fiction.