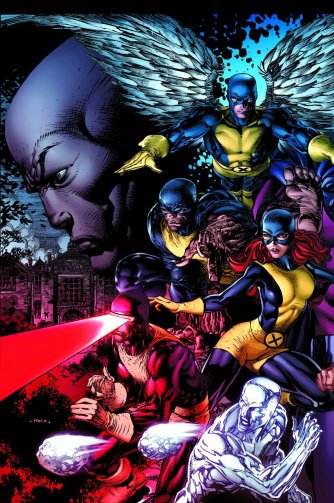 The death of Professor Charles Xavier has been greatly exaggerated. To be fair most deaths in the modern Marvel age do carry some significance, even with the caveat that they’ll eventually come back. Steve Rogers, for example, was gone for several years (an eternity in comics) following his highly publicized death after Civil War. What follows is the life and times of Charles Xavier wrapped up in an X-Men clip show, as Xavier’s past sins are put on full display in this entertaining but at times repetitive new series.

Professor X was seemingly shot and killed by Bishop at the end of epic mega X-Men crossover event Messiah Complex, but that proved to be only a temporary setback. His body was swiftly recovered by Mr. Sinister’s mutant army the Marauders and a mutant known as Exodus immediately set to work mending his body and restoring his broken mind. A gunshot to the head does bad things to the brain, you see.

“Divided He Stands,” is a play on the then-current state of the X-Men following the events of Messiah Complex, called “Divided We Stand.” Mainly that Xavier’s mansion was destroyed and instead of rebuilding, as they often did, Cyclops packed up and moved everyone out West to San Francisco.

Xavier is on his own, though he’s able to escape the Maruaders thanks to some inner fighting and a little help from his frenemy Magneto. The powerless and introspective Magneto (after House of M) is a great figure that I always enjoy seeing, and it’s a shame he’s so underused during this time period.

Xavier eventually wins the battle of wills against Exodus and is free to pursue his own self-loathing and self-discovery. Probably the two mutants with the biggest character arcs during this time are Cyclops and Professor X, and especially their strained relationship with each other. It hit its breaking point during the mini-series X-Men: Deadly Genesis, when Xavier was forced to reveal Scott Summers’ third brother. He’d used his long-lost space brother Vulcan as leader of a strike team to rescue his X-Men, only to get them all killed. Xavier erased and altered Scott’s memory of the whole event. When Cyclops finds out in Deadly Genesis, he’s none too pleased. 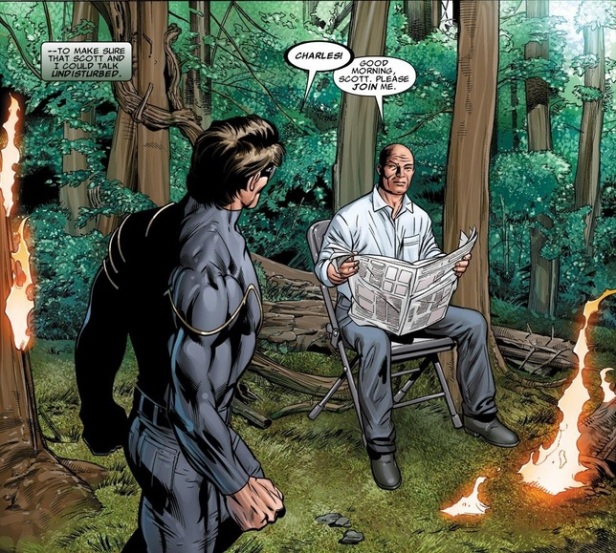 Professor X has been on the outs ever since. None of the X-Men trust him or even want him around, and his despondent, apologetic attitude is dismaying and frustrating. It’s difficult to know whether to pity him or despite him; credit to writer Mike Carey for making me feel both while reading this series.

“Sins of the Father,” picks up the current story a bit more, throwing Gambit and Sebastian Shaw into the fray with Xavier. Shaw and Xavier are targets of the late Mr. Sinister’s Cronus device. Thanks to some shady genetic tampering that’s totally up Sinister’s alley, he can come back from the dead using the device and the certain people he imprinted himself upon – including Xavier. I wasn’t sure why Gambit was there but seeing as how he hasn’t been with the X-Men in some time, it was nice giving him something decently heroic to do.

The three men end up battling Sinister’s machinations in an underground research facility, against a skeletal woman that wants Sinister’s ghostly possession all to herself. Shaw and Gambit fight to escape (eventually combining their powers in true comic book fashion) while Xavier battles Sinister for control of his own mind, echoing the previous telepathic battle against Exodus.

The resulting battle on the astral plane is about the same as Sinister drudges up Xavier’s past sins and regrets, making him relive them to wear him down. Thus, the clip show. It’s fun and entertaining, as clip shows often are. I found it dismaying that they’d reuse this exact same plot device for the climax of both stories, though the Sinister one is much more effective.

The second volume ends with a two-part story, “Walkthrough,” in which Xavier finally confronts Cyclops in their new California home. Their shattered relationship remains the catalyst of Xavier’s regret and shame, but when he goes to talk and apologize to Scott for the umpteenth time, Emma Frost is there to give Xavier a taste of his own medicine. Wait, they’re going to dive into Xavier’s mind AGAIN? Yep! 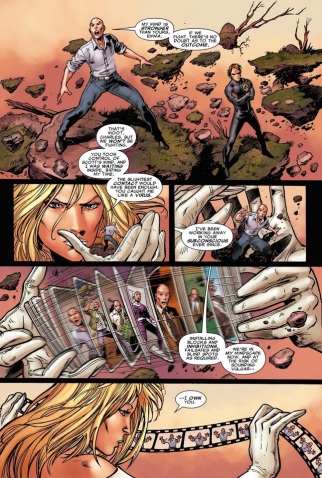 A third clip show! The Emma Frost one does some inventive things on the art side of the astral plane presentation, representing his life as film strip that Emma Frost combs through. She’s searching for any lingering side of Sinister, a smart precaution, and also putting Xavier through the ringer for hurting Scott. Emma is unapologetic as she forces Xavier to see his past mistakes and regrets not because she’s cruel and evil, but more of an aggressive form of therapy that ends up working quite well. But, yeah, it’s still crazy that this is literally the third time Xavier’s been through this in as many stories!

X-Men: Legacy is a nice if mostly unnecessary side story with Professor X. The one important revelation comes at the end, when Scott ultimately forgives his old mentor and friend – the very last panel is of them shaking hands, a monumental gesture after all they’ve been through.

Taking the former X-Men series and molding into a Professor X-centric tale was a bold move, and one that would last about ten more issues before it evolved into a Rogue-centric series. Her story is teased a bit in a few panels as she scours the Australian Outback, also searching for the ghosts of the past. I wasn’t a fan that Marvel kept the issue numbering the same since this definitely feels like an all-new series and story.

Likewise I found the art to be just okay. Scott Eaton’s work is very 90s – big, glossy, and exaggerated. It’s not bad but definitely not my preferred style, though I did fine much of the panel construction fun and interesting during the astral plane “this is your life, Charles” segments. If you feel a wave of happy nostalgia reliving a lot of big events from the X-Men’s past (especially during their heyday in the 80s), X-Men: Legacy is a decently fun romp though Xavier’s mind.

One thought on “Marvel Comics Final Thoughts – X-Men: Legacy – Divided He Stands, Sins of the Father”