It’s been 16 long months since we last visited Westworld, yet for our characters it’s only been mere moments. The season two premiere is a bit jarring as we quickly get re-acclimated. The premiere jumps right into the aftermath of the climactic uprising of the emerging self-aware androids who violently cast off their shackles as entertainers in a Wild West-themed park of the future.

With Dr. Ford dying during the final moments of last season’s finale, our major cast has been reduced (and makes Anthony Hopkins the Sean Bean of this show). The season premiere checks in with each of our remaining major players: Delores, Bernard, Maeve, and the Man in Black (William). All four are separated and have their own agendas during, and immediately following the Westworld rebellion.

Delores remains the most enigmatic character. Her motives have grown clear: she has no more fucks to give when it comes to being an AI slave. She hunts down the rest of the guests (I believe they were mostly VIP from the gathering during the finale), and even leaves several hanging on nooses.

Out of all the hosts she is emerging as the most villainous. Right now she’d be the first to take up the Destroy All Humans chant that fuels many a renegade AI sci-fi story. Yet she still has the capacity to love and a desire to shepherd her people, as shown with her interactions with Teddy. 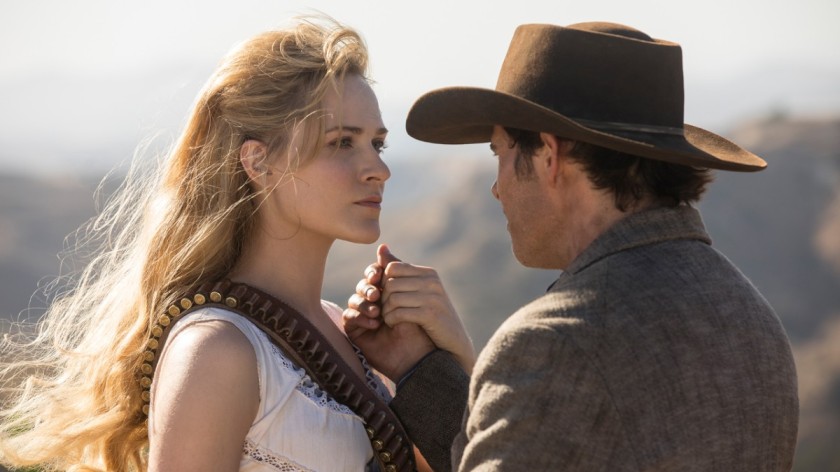 Poor Teddy has had little to do other than die repeatedly last season. Here he has no agency of his own and simply follows Delores around like a lost puppy and occasionally makes out with her. He doesn’t seem entirely on board with her revolution, which could lead to some interesting drama.

The Man in Black was given one of the biggest surprise twists of last season, revealing that a large chunk of last season’s narrative actually took place in the past, and that the William character was actually MIB when he was younger (a neat trick, since hosts like Delores don’t age).

The problem is now he doesn’t seem to have anything to do. He survives the initial slaughter by hiding under some bodies. He finds his horse and kicks ass during a firefight, then dramatically dons his signature black hat.

From there he gets a single scene with a malfunctioning young boy host (the same who Dr. Ford operated on by opening his face). There’s some cryptic words exchanged that I could barely understand thanks to the heavy electronic distortion, and MIB responds by shooting him. We need to get him directly involved in one of our other, more interesting stories pronto.

Maeve is still in Westworld HQ, which looks like the aftermath of a post-apocalyptic warzone. It’s interesting to note that Delores’ revolution only worked because at the same time Maeve was having her own violent uprising right in central command, with the help of her lover Hector.

The results are fairly quiet and unsettling, with bloody bodies strewn around everywhere. One of the few survivors is Lee, the self-important writer of the Westworld hosts’ various stories. His sardonic wit last season was fun, and they go even further into full-on comic relief when Maeve finds and rescues him.

I like this pairing. Maeve is incredibly serious and focused on her mission to rescue her “daughter,” a powerful result of her own self-awareness at a previous life that should’ve been forgotten. Lee assumes the role of the sycophantic sidekick of every Disney villain, with all the whimpering jokes that entails.

Our final storyline surrounds Bernard, and it’s here the show starts to play with its non-linear storytelling that it loves so much.

We see Bernard during three supposedly different situations. The first is discussing a dream with Delores, which could be set any time last season or before (in fact, it’s most likely from before with Arnold, the human that Bernard is modeled after). The second is the direct aftermath of last season’s finale, as he and Hale try to escape the park, and the third is a flash-forward as he washes up on shore to find a full security detail rounding up the hosts and killing them.

During Delores’ attack in the finale, Bernard hides out with some other guests in a nearby barn. It’s interesting to note that Bernard can effectively walk in two worlds. He’s a host, yet everyone thinks he’s human (and even Bernard himself until about midway through last season, creating the other major twist of season one).

The surviving group escapes only to be tricked by a nasty ambush by some other hosts, who stage a park car and clean-up crew after they’d already slaughtered them. Only Bernard and Charlotte Hale escape, and Hale leads them to an off-grid hidden bunker that even he didn’t know about.

Bernard (and we) are startled to find AI hosts operating this bunker, particularly as they are faceless white drones that look like humans without their outer layer of skin, leaving exposed muscles.

Hale can get a message to the outside world to the group she’s working for, but they won’t extract her without the package. She thought she delivered it but something happened to it. The package is, of course, a host.

Hale is basically the Dennis Nedry of the park, only in a management role instead of a desk jokey. She’s trying to sell corporate secrets and guest information gathered by hosts, but unlike Nedry she wasn’t the main cause of all the park’s problems. Her side plot has been largely inconsequential, yet is clearly going somewhere since we’re focusing so much on it.

Bernard has a way to find the host they need, named Peter Abernathy (who I believe played Delores’ dad), by linking into a host on the table and accessing the neural network that links them all together.

At the same time, Bernard’s head wound had been re-aggravated while hiding in the barn (remember when he shot himself in the head last season? Me neither, stupid 16 month break…). He’s damaged and leaking cortical fluid, and has to secretly drain some from the host body and inject it into his own head. He keeps it a secret from Hale to continue posing as a human.

The craziest part of the episode is the flash-forward time jump, where Bernard wakes up on a shore to find the full security team on site. They reveal that it’s been two weeks since communication with the park went down, giving us a solid time frame to work with, but still a whole bunch of questions.

I presume that those two weeks will form the majority of season two’s plotline. The biggest discovery in this future storyline (aside from a mysterious tiger body and a teasing reference to ‘Park 6’) is a gathering of 500 hosts that the team finds in a valley.

The entire site had been flooded, and they find hundreds of hosts dead in the water, including poor Teddy, which was probably supposed to be dramatic but that dude’s like Kenny from South Park (though I suppose at this point nobody is getting put back together and reset either).

The final words of the episode paint Bernard as the central character of the season, as he reveals that he killed them all.

Following a crazy big episode (last season’s finale), it’s not uncommon for the next episode to be much calmer. By checking in with everyone we didn’t get to advance too far into any one story. The forward time-jump is an interesting framing device and I’m particularly interested in how Bernard’s story plays out this season.

Bernard: Bernard could do little more than look on during Delores’ triumph at the end of last season, but here he’s given not only the most compelling story in the aftermath (find a decommissioned host and escape) but also is our only POV into the future where the security team arrives to wrest back control of the park.

Lee: I didn’t think Westworld needed the plucky comic relief but I’ll be damned if Lee isn’t a fun character to have around. His paring with Maeve feels especially appropriate, and should make her story much more entertaining.

Man in Black: Sure he gets a badass little action moment but the scene with the boy just reminds us that The Maze he’d been searching his whole life for was basically just a complicated metaphor for the AI’s self-awareness and uprising. So what’s a disgruntled park-junky to do? Hopefully something more interesting than murder creepy robo-kids.

Stubbs is alive! We last saw the park’s head of security as he was being tackled by the creepy Ghost Nation when he realized his commands no longer worked just as shit started to go wrong.