A satisfying, if overly long, fifth entry that has the fun characters and varied puzzles of the venerable adventure franchise.

I want to take a moment to celebrate my 50th completed game since I began Rogue’s Adventures in the Fall of 2012.  Motivated by an ever-expanding backlog thanks to constant and amazing Steam sales, I was drowning in games, and never knew which ones to play. Rogue’s Adventures helps me create a schedule and stick to it, and I’ve played (and completed) dozens of games in the last few years.

Broken Sword 5 is a neat game to have for number 50. The first three games were a major reason I began Rogue’s Adventures. I had a particularly large backlog of point and click adventure games at the time. Most of what would become Season 1 of Rogue’s Adventures were adventure games, including the first three Broken Sword titles (which I undoubtedly bought in a discounted bundle). I usually prefer my adventure games with fantasy or sci-fi flavoring but the modern thrillers with lovable characters and varied puzzles resonated well with me.

While Broken Sword 5 is far from the best entry, it does effectively bring back the characters, themes, and fond memories of the originals – a nostalgia factor I’ve only had for a few years!

The Da Vinci Code kind of ruined the whole Templar mystery that the previous Broken Sword games centered around (the original which predates The Da Vinci Code by a number of years, just sayin’). The Serpent’s Curse instead focuses on a new cult-like threat and a mystery involving an old painting. In typical fashion, American patent lawyer George Stobbart and French investigate journalist Nico Collard stumble upon the plot when they witness a murder and robbery at an art exhibit in Paris. 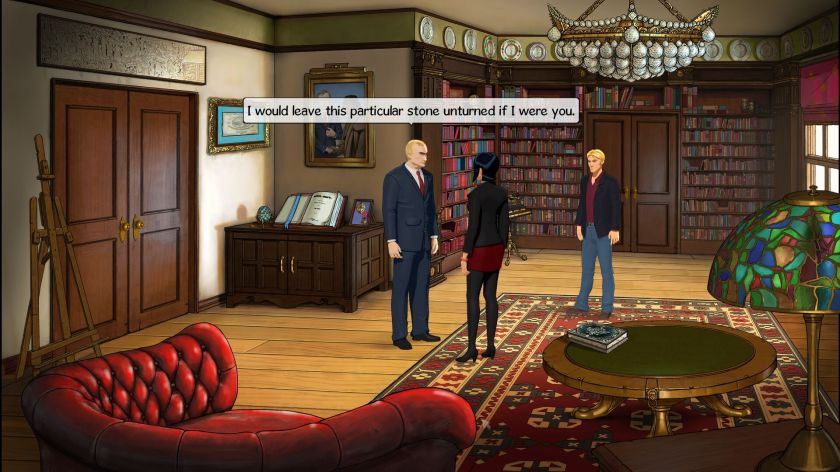 Like Broken Age, the Kickstarter crowd-funded Broken Sword 5 was released in two episodes (unlike Broken Age they were released only a couple months apart). The two parts are distinctly different in location, with part 1 taking place entirely within Paris. What feels like only half a dozen or so different screens are used, and things grow repetitive. I enjoyed the unfolding mystery and plot behind the cursed painting “La Melediccio,” and the trail of clues they follow is logical and interesting.

Most of the time you control George (with returning voice actor Rolf Saxon) while Nico is given a more reduced role, eventually becoming little more than hint-giver towards the end. Still, the pair are great together, retaining the snappy writing and witty dialogue of any of your favorite Will They or Won’t They type shows (X-Files, etc). Broken Sword 5 also has by far the largest supporting cast of any previous game, and all are fully voiced. I found the voice acting especially good for a crowd-funded game, from the British gangster suffering from existential crisis to the aging hippie widow.

The pacing is dreadfully slow throughout the first half as you talk to the same few people over and over again. While the cartoon-y art style is lovely and a wonderful throwback, the animations are stiff and slow. The dialogue also had a large amount of awkward pausing before each ‘track’ would play, and combined with the already slow pace drove me crazy through the first few hours. Things finally pick up toward the end as familiar faces begin dropping dead, and Nico and George only barely escape with their lives as a new threat emerges.

The second half feels much more Broken Sword-y as our heroes go on an exotic journey. They travel to Spain in search of a powerful Gnostic artifact called the Tabula Veratatis, and in true thriller fashion, there’s another group hunting for it. This time the slower search for clues is punctuated by some fun puzzles filled with code decryptions and learning and utilizing various Gnostic concepts and teachings.

I would go so far as to hazard that some conservative Christians may balk at the game’s main plot (similar to The Da Vinci Code I suppose) as Gnostics have a very different worship of Jehovah and Lucifer – and the game very much paints the Gnostics as the good guys (which I thought was a neat twist). Learning about their history and beliefs is a major part of the plot and puzzles.

Eventually the painting is revealed to be a map to the Tabula Veratatis, which in turn is also a map that leads to the finale in the Garden of Eden. I enjoyed the mix of multi-stage puzzles intertwined with action-packed cutscenes and moments leading to the finale (particularly the scenes at the mountain chapel). The finale itself fell a bit flat, however, leaving only one major puzzle followed by a bunch of dialogue and a cutscene. Things ended predictably as our heroes defeated the underused villain, but it also cemented the more light-hearted nature of the series.

If the goal of the long-awaited fifth entry was to feel like a Broken Sword game, I think it succeeded. The modern setting with some ancient, supernatural elements, the funny and memorable characters, and the excellent puzzle designs all felt spot on. I especially enjoyed the fun return of old side characters from previous games – particularly French Sergeant Moue and tourists Duane and Pearl Henderson. While it’s not necessary to play any of the previous games, there are plenty of nods and winks to previous events and characters to make any fan happy.

I was less than thrilled with the overall pacing. The game is just too long for its own good. The first half is especially egregious as you slowly unravel the mystery behind the painting, the groups involved, and a love triangle involving the first victim. The puzzles are decent, but mostly involve searching the few new areas you unlock, and the entire game is set up in a very linear fashion, limiting your options (more a staple of the genre than the game’s fault). The second half is a vast improvement in the puzzle department and pacing, but it takes a good 6 or 7 hours to get there.

As a fan of the series (and point and click adventure games) I enjoyed The Serpent’s Curse. Dialogue could be skipped through rapidly if I was feeling especially impatient. Also, no crate puzzles (damn you Broken Sword III)! The characters felt authentic, the voice acting was great, and the puzzles were solid and varied. Like Broken Age the developer took many of the criticisms of the first half to create a superior second half, leading to a semi-episodic format that worked well for everyone. I’m satisfied that one of the longer tenured adventure series received a new entry, and hope it’s not the last.

Final Say: A satisfying, if overly long, fifth entry that has the fun characters and varied puzzles of the venerable adventure franchise.