In our sophomore session, our heroes deliver the ingots to Bryn Shander, attend the Council of Speakers, and accept the job of Ten Towns Marshals.

The party had managed to defeat the goblins and leave the wagon, and the polar bears, intact. Edmond quaffed the Potion of Animal Friendship and used it to charm the polar bears (along with his magically alchemized honey and a severed goblin arm).

They hitched the sled full of ingots to the wagon, climbed aboard, and let Edmond take the reigns. He magically conjured the tones of an ice cream truck (or D&D-equivalent) to mitigate any hostilities that the town of Bryn Shander may have toward a polar bear-powered goblin wagon riding up to their gates (and earning a point of Inspiration).

Sheriff Markham Southwell came outside and informed them that the wagon was not exactly street-legal in Bryn Shander. Edmond quickly agreed to release the bears (dramatically via magic), and convinced them to run away rather than risk an altercation with the town guards.

Sheriff Southwell opened the gates and led the players inside the town, assuring them the wagon could remain and the ingots would be delivered to the dwarves. He took them to the Town Hall, where Speaker Duvessa Shane had requested any adventuring types be brought to her right away. 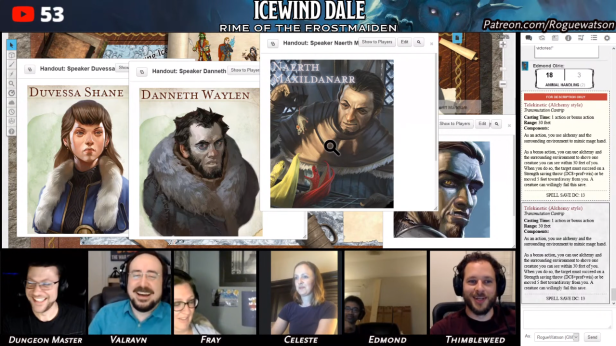 What followed was a lengthy social encounter as the party introduced themselves and the Speakers offered them a job, granting them the authority to move around the town and help the people and obey the Speakers as Ten Towns Marshals.

The Speakers brought up several issues and problems they had, in addition to the overall problem of the everlasting darkness and winter, which was gradually destroying their ecosystem and way of life over the past few months.

They didn’t have any leads on the perma-winter, though Speaker Waylen was convinced it was Auril’s punishment for not showing the goddess of winter enough fealty.

Speaker Maxildanaar spoke of a previous adventuring group that had come through his town. They had turned down the position, saying they had been hired by someone else for an important mission. They were last seen in Targos.

Speaker Masthew mentioned that a group of kobolds had recently moved into Termalaine’s biggest gem mine. The miners refused to go back to work, had the militia refused to deal with the problem.

Speaker Shane mentioned that the Council were only at half strength — several Speakers had not attended, and they hadn’t heard from some of the smaller and more isolated towns in some time. She was particularly concerned about Trovus, the Dragonborn Speaker of Caer-Konig and an ex-adventurer.

She also mentioned that their latest shipment of honey mead from Good Mead had never arrived — and neither had Speaker Rielsbarrow. She asked the party to check up on Good Mead.

The party eventually accepted the positions of Ten Town Marshals, which included copper badges, free lodging and meals anywhere in Ten Towns, and a weekly salary of 10 gold (first week paid up front!).

They stopped by Blackiron Blades to meet the grateful dwarves and get another 10gp in gems, then on to the Northlook Inn to hunker down for the night – though not before Valravn entertained everyone, including the invited dwarves and Sheriff, to hear the tales of their heroic deeds (earning Inspiration).

One thought on “Icewind Dale: Rime of the Frostmaiden Session 2 Recap”