Having successfully stealthed their way into the Duergar Outpost, the Marshals cautiously search the area for the prisoners, and end up finding Nildar, one of the Duergar princes, and the leader of the outpost.

Thimbleweed and Fray had emerged from the well and into the main keep, finding it mostly empty save for some large cages. The cages held a pair of goats, as well as a large undead ogre, who grew agitated at the sight of them.

Fray acted quickly, fishing out a grisly snack from her pack. She’d been taking body parts as trophies from many of her kills, and the zombie was eager to munch on them, temporarily keeping it quiet while Thimbleweed used Speak with Animals on the goats.

The goats were prisoners and didn’t know much, but did tease that the ogre zombie was a pet of the Duergar. Thimbleweed released the goats back down the well, and we enjoyed a humorous scene as the goats emerged out of the tunnel that Fray and Thimbleweed and got into, leading to Valravn thinking his friends had been polymorphed.

Once the rest of the party made it up the well, they had three paths to choose from: a door to the east, a hallway to the south, and a larger path to the northwest.

They opted to go northwest before the zombie finished its meal. The keep continued through two open doorways, with a lever on the other side, and a door to the south.

Nothing like an innocuous lever to make a party go crazy. They debated for several moments on whether to push the lever, and what it could do. Thimbleweed listened at the door and peeked inside, noting at least one duergar moving around.

Valravn backed up to around one of the doorways as Fray pulled it, sending large metal spikes screeching out of the floor and ceiling of the doorways. Valravn made the DEX save, avoiding becoming impaled, though the sound echoed through the keep.

The party readied for action as they felt someone jostle the door, and Thimbleweed threw it open, only to see nobody inside. They recalled that duergar can turn invisible, and Thimbleweed cast Faerie Fire, revealing a regally dressed dwarf armed with several jars of fungus. Upon being discovered, the duergar prince hurled one of his jars and Celeste began choking on acid. Roll for initiative!

Alas, Nildar Sunblight wasn’t going to last long alone against the full might of the party (and it didn’t help that I rolled a 1 on initiative). He never got off another attack as the others ran forward to hack him up. Fray opted to knock him unconscious, and tied up him for questioning. 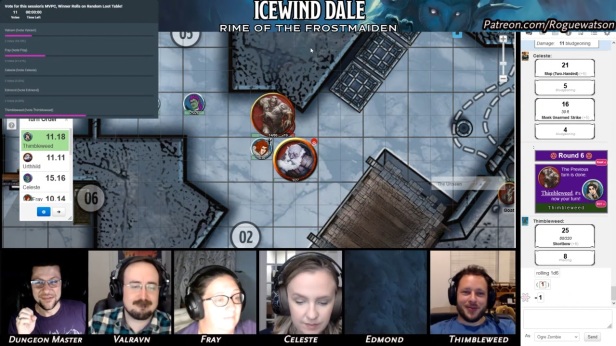 He revealed that he is the leader of this outpost, and works directly for his father, Xardarok Sunblight. Like the other captured duergar, he spoke of building an empire, and of a dragon destroying Ten Towns. But he also spoke of his own plans: using the spores from a Myconid Sovereign to turn people into fungal slaves. Nildar teased that the spore servants were created from a special area of the outpost to the south.

His office area was awash with alchemical supplies, and the party helped themselves to several fungal jars, which I mostly took from the Myconid Sovereign stat block. They also found the magic color-changing lantern, several pieces of chardalyn, a chardalyn dagger, and some gold.

Having run out of questions, Fray hacked off some of his fingers, then walked back to the main keep and threw him at the ogre zombie, hoping for a nasty way of finishing him off. She forgot one clue, however – the zombie was actually loyal to the duergar. That and the party had definitely made some noise by sprining that trap, and now the still-alive Nildar screamed for help as a pair of invisible and enlarged duergar suddenly charged at Fray!

The rest of the party had to catch up to the action as the duergar attacked Fray, and Nildar spent his turn freeing the ogre zombie while he scrambled for safety. One duergar went down quickly but the either was locked in a fierce battle with Fray, while the others pounded on the fleshy, 80hp Ogre Zombie. Fray tanked both enemies like a champ thanks to her rage, but still dropped to 6hp by the end of the fight, while Celeste blew threw Ki points and Valravn gave everyone Bardic Inspiration.

Finally the even the undead ogre slumped down dead, but Nildar Sunblight had escaped during the fight, minus a few fingers, but still alive, and very angry. Meanwhile, the Marshals had killed several duergar, but still haven’t located the prisoners, or even discovered if they’re still alive.

One thought on “Icewind Dale: Rime of the Frostmaiden Session 11 Recap”