Having explored the cistern and found the bodies, and the prisoners, the Marshals were on their way back to deal with Kadroth, when he appeared at the ledge of the cistern, a small army around him. Roll for initiative!

This was an interesting fight with several unique and modified statblocks. Kadroth’s forces consisted of:

It was also a unique battlefield. The party started 60 feet away, three of them crammed on a tiny rowboat crossing the freezing waters, while Edmond flew with his hover elixir and carried Fray.

Celeste (controlled by Chris this session), attempted to row the boat but didn’t get far, while Valravn used Calm Emotions to shut down two of the four humanoid enemies in the first round, though he would quickly lose concentration.

The Cult Fanatic cast Shatter on the entire party, rolling an impressive 16 damage. Almost everyone failed the meager CON save, leaving the Marshals heavily injured, worried, and downing potions of healing on their turns.

Kadroth raised his Chardalyn Amulet and unleashed a powerful spell, Evard’s Black Tentacles, directly on the boat, tearing it up and hoping to drag them into the freezing water.

Wouldn’t you know it, all three boaters made the DEX saves to avoid the tentacles, which apparently does zero damage on a successful save! I ruled that small humanoids like Fray and Thimbleweed could drop down and run along the edge of the frozen chunks of water with a successful DEX save (Thimbleweed had to use Inspiration).

Celeste could use Step on the Wind to leap off the splintering boat and raging tentacles to the closer storage room, while Valravn could teleport with his Fey Touch Mist Step. Succeeding on the DEX save vs the tentacles was huge, as he was sitting on three hit points in the tentacle zone. 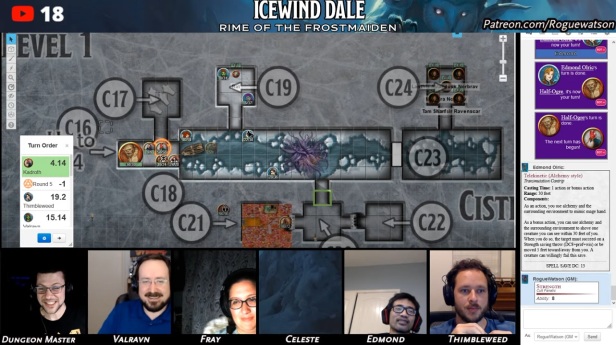 With the tentacle mess behind them the party began to make serious gains.

Fray continued to run toward the ledge, and began grabbing enemies and yeeting them into the freezing water.

Valravn, Edmond, Celeste, and Thimbleweed would all safely attack from range, with Thimbleweed nailing a nasty 30+ damage critical hit on Kadroth, forcing no fewer than FOUR saving throws on my boss (Massive Damage save, Concentration check, Save vs Swarm movement, Save vs Chardalyn Arrow blinding). A record number of saving throws in all our years of playing D&D!

It was kind of hilarious how badly things swung in their favor, particularly as I never once connected with a weapon attack. Missed arrows, bolts, and a particularly awful missed battleaxe attack from the half-ogre’s one attack, after which he failed on the CHA save due to the chardalyn weapon, rendering himself paralyzed for a turn.

Thimblweed took advantage of the poor paralyzed half-ogre by hitting him with an arrow and using the swarm to pull his giant paralyzed body into the freezing water, right on top of another victim, sending them both sinking to the bottom.

Kadroth would face a similar ignominious end. Valravn teleported to the ledge and cast Dissonant Whispers, forcing Kadroth to use his reaction to run past a raging Fray, who promptly embedded his body into the nearest wall. Show’s over, folks!

Despite the thorough ass-kicking by the players (after the initial scary Shatter spell) it was a fun fight. They looted Kadroth’s Chardalyn Amulet, which has a chance of absorbing spells, and emerged back into the tower on the ground floor.

They found a standoff between Avarice’s forces and the few remaining loyalists. The Marshals helped convince the combatants to stand out lest they suffer the same fate, and they surrendered. Avarice agreed to take the rest of the Black Swords and leave the castle. Speaker Crannoc wanted to arrest them but was quickly mollified by the more powerful people in the room.

A fairly lengthy role-playing scene unfolded between the party and Avarice, who dismissed the other Black Swords members so they could speak privately. She revealed to the party that she had been sent to Icewind Dale along with two other wizards to hunt a fourth wizard, a renegade who stole an artifact from the Arcane Brotherhood and journeyed to Icewind Dale. Shortly after, the perma-night occurred.

The hunting wizards went their separate ways as they continue to track the renegade, with Avarice taking an interest in chardalyn and believing it’s related to everything going on. She confirmed that Dzaan, the wizard who had hired the party for Kelvin’s Cairn, was one of her fellow wizards. The party did not reveal that he had found something to the northeast. Likewise, Avarice didn’t reveal what exactly the renegade wizard stole.

The party and Avarice agreed to remain in touch as she left, still possessing the Sending Stones to communicate. Speaker Crannoc regained control of the castle, and the citizens of Caer-Dineval were glad to have their leader restored, and helped rescu the prisoners in the cistern. The Marshals enjoyed a Long Rest in the town, and plan their next move.

One thought on “Icewind Dale: Rime of the Frostmaiden Session 16 Recap”