The Marshals wrap up their discussion of the goliath feud at Skytower Shelter with Chief Ogolai. The rivlarly is born more out of a minor event in the past rather than any deep-seated animosity, yet both chieftains appear too stubborn to make the first move.

Kapunuk offers to join the party on their way to Skytower Shelter, where they’ll meet with the rival clan and hear their side of the story.

Before they leave Wyrmdoom, Valravn, Fray, and Edmond are gifted supernatural charms from the little Chwingas that befriended them, including magical snowballs and a one-use cold immunity reaction. Thanks little friends!

Kapunuk is shocked at the Id Ascendant, but as the player characters point out, he has indeed “seen some shit” during his previous adventures.

The team clambors aboard the starship and head south towards the Akannathi tribe.

Unlike Wyrmdoom Crag, Skytower Shelter is located over 10,000 feet up the side of a mountain. The Akannathi are fierce griffon breeders, and far more dour and distrusting than their cousins to the north.

Kapunuk warns that landing the tentacle spaceship on their doorstep wouldn’t make for good opening negotiations. In fact, his presence alone might set them off.

The party deliberates on the best course of action on the way there. They could lie to both leaders, or even assassinate one of the leaders. They even whisper about killing Chief Ogolai and installing Kapunuk as leader.

Ultimately they decide to hear what the other tribe has to say. Edmond decides to use Disguise Self to appear as Chief Ogolai and surrender, even though in speaking to her he’s pretty sure she would never do that (he’s right).

They park the Id Ascendant out of sight, then climb the path to Skytower Shelter while griffons scream warnings around them.

In contrast to Wyrmdoom Crag’s open caves and sports matches, Skytower’s entrance is a 10-ft tall barricade with metal spikes. Through gaps they can see the towering chieftain, his pet crag cag, and several glowering guards.

Edmond’s deception goes poorly. As he anticipated, he’s not acting at all like the chieftain would act (he’s also significantly shorter). Then he rolls a 3 on his Deception roll. 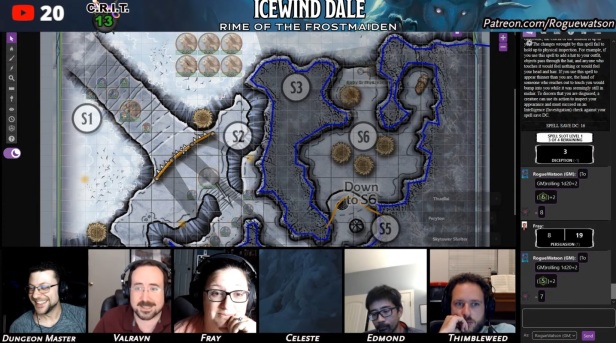 Chief Arn Rockfist isn’t having it, warning the rest of his guards to watch for deceptive and illusory spellcasting. He tells these interlopers to come no closer.

Thankfully Fray takes over and immediately warns up to him over her ability to speak giant (courtesy of the runic axe) and their mutual disdain of the “weaker” goliath clan. She even beat one of them up!

She wants to hear them out and get their side. Arn relents and lets them inside, but warns them against magic or violence.

Inside the cave he tells them their side of the story. How a child was accidentally injured by a griffon during a goat-ball match between the two clans (after a ball struck the griffon). But then warriors from Wyrmdoom crept into their caves and slew the griffon in its nest.

The Akannathi never forgave them for that, breaking all ties with the other clan.

But that was decades ago. The children are now the adults, and they should really bury the hatchet, as the PCs point out.

Fray even suggests meeting over neutral ground over a game of goat-ball! Chief Arn reluctantly agrees, but he needs some help first.

Recently a white dragon has moved into the mountain range nearby, and has been hunting their griffons. They spent a cadre of warriors to deal with it, but they have yet to return.

The Marshals agree to search for the dragon (and the goliaths) and deal with it.

As they return to the Id Ascendant, the party tells Kapunuk to return to his people and inform them of the upcoming peace accords AKA the new Goliath Games!

Unfortunately their spaceship can only get so close due to extreme weather conditions surrounding the mountains. They’re forced to land and huff it on foot, while searching for any signs of dragon or goliaths.

Thimbleweed’s superior survival skills help put them on the right track with minimal resistance. They find clawmarks, followed by a makeshift camp in a cave with a recent campfire.

Continuing along a narrow path on the cliff, they’re struck by a terrible blizzard with howling winds. The maddening winds are supernaturally strong, affecting their minds and causing them to lash out at their fellow party members, and each other

I borrowed the Howl of Maddening Winds ability from the Thuellai creature from Tome of Beasts, and used it as an environmental hazard. The PCs had to make three DC 14 WIS saves as they crept through, taking psychic damage and randomly attacking an ally when they failed.

By the time they make it out of the snowstorm, they were weakened, bloody, and highly annoyed.

The trail picks back up, and soon they find several bodies lying in the snow. Ravenous, monstrous bird-like creatures with elk heads feast on the bodies. Thimbleweed sneaks up to the Perytons, then back to the party. Showing off the stealth skills?

Without any other ideas, Edmond whips out a scroll of Gust of Wind, and blasts the feasting Perytons with a vortex.

At the same time, the Perytons end up pulling a Clever Girl maneuver. Another three Pertyons are hunting in the air, and ambush the party from above, striking down with furious talons.

We’ll see how this fight plays out next week!

One thought on “Icewind Dale: Rime of the Frostmaiden Session 54 Recap”