Delving deeper into the Twisted Caverns, our hunted enemy sends a massive monstrosity to destroy us. 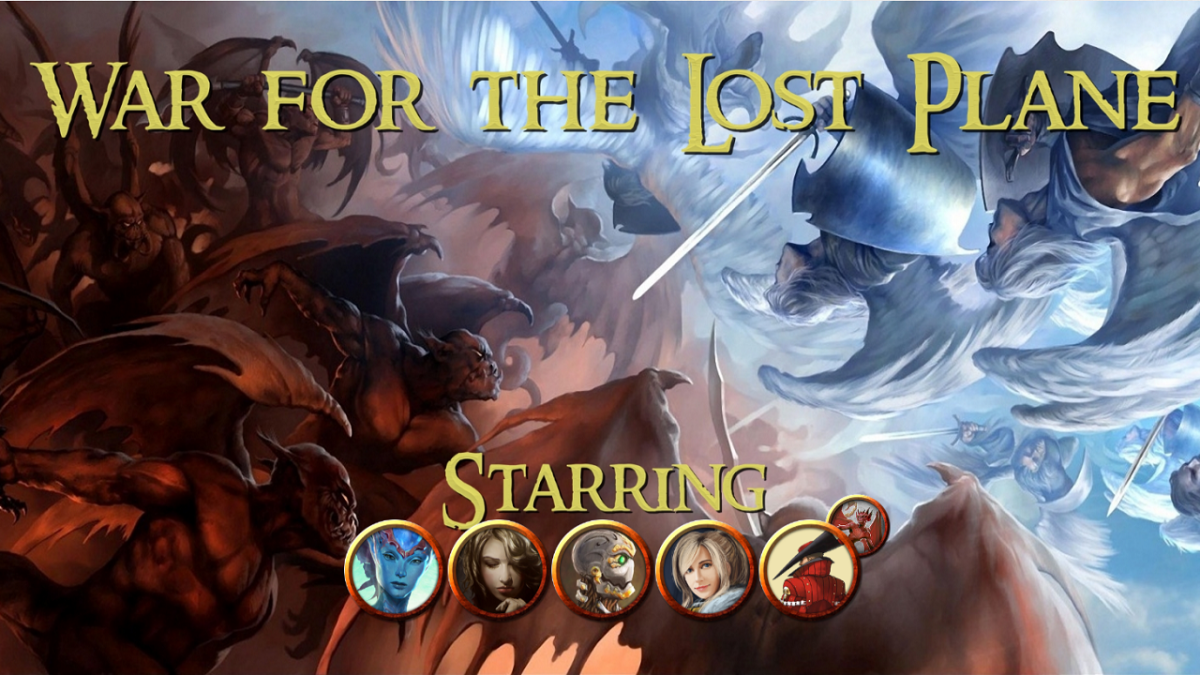 As more of the fungal humanoids emerge from the water, TIM calls out another horde approaching from a nearby tunnel.

Our shouts are drowned out by a great rumbling. To the east the river swells and churns, as if a large beast is hurtling toward us just under the water.

I leap off the boat onto the riverbank, the chaotic magic swirling a fog cloud around me. Despite the risk, I build the demonic power within me and hurl another fireball down the tunnel, roasting the shambling creatures.

Once again the chaos magic of the tunnels infects me, this time compelling me to always tell the truth.

I turn to see the river explode. A massive, tentacled monstrosity erupts from the water, piercing eyes embedded all over its tentacles. Screams echo off the walls, emerging from multiple mouths among the writhing beast. It undulates forward, its gaze weaponing the chaos magic as the remaining fungal creatures freeze, explode, and rot in front of us.

“Into the tunnel!” I scream.

Continuing down the winding river, we waved to a group of slaad on a riverbank, tending to what looked like baby slaad tadpoles. The river was as twisty as the caverns, taking us south, then west, then east.

Another riverbank held a trio of face-less humanoid creatures. They looked like a combination of coral, fungus, and jellyfish. They appeared perfectly still, but a booming voice suddenly rang out in our heads.

First it warned us away from its plans, then it threatened us, claiming it could influence weaker minded creatures. Was this the “ball of light” we were hunting?

On cue the fungal creatures sprang to life. Kaelan used Hunter’s Sense to see they were weak to fire, while Gillian, swimming alongside the boat, noticed a horde of them swimming up from the depths.

Kaelan hurled a Fireball into the trio on the riverbank, incinerating two of them. The chaotic magic of the caverns caused his eyes to pour fog, enveloping everyone around him.

Gillian would fare far worse after destroying half the approaching horde with an underwater Thunderwave – her arms and legs rearranging themselves!

The surviving horde reached the surface and began slicing into us with arms like knives. The creatures died fast but dealt some solid damage.

An unsettling cacophony preceded a large creature moving through the water toward us, as the voice in our heads bragged about nudging feral beasts in our direction. 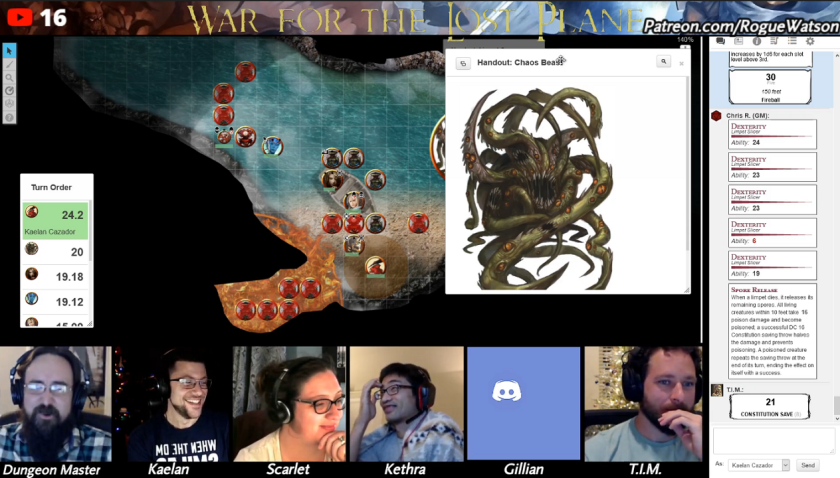 The beast was a terrifying tentacled monstrosity with multiple eyes and mouths. It wielded chaos magic, freezing, rotting, and burning any creature in its path – in addition to slamming with its tentacles and inflicting more of the debilitating chaos magic effects upon us.

Beyond the riverbank was a cave network, and we began hauling butt toward it. Kaelan leapt off the boat and threw another fireball down the tunnel destroying another horde of fungal creatures and clearing the path while the Chaos Beast began tearing its way toward us (destroying several of the fungal creatures in the process).

We began fleeing down the tunnel, though brave paladin Scarlet strode up to the beast to engage it, telling the rest of us to run (Kethra was long gone by now, having taken the brunt of the enemies’ damage).

Kaelan called for Gillian to teleport Scarlet down into the tunnels, using his Devil’s Sight to track a safe place to retreat. We were all either poisoned from the slicers and/or affected by two to three of the chaos magics, and not in the mood to stay and fight this creature – though TIM’s glitter powers were seemingly enhanced when he began to levitate off the ground!

Gillian used Dimension Door to get her and Scarlet out. Both had been terribly affected by the chaos magic, including Gillian growing eye stalks and losing her memory, and Scarlet becoming inflicted with Confusion and the same Fog Cloud-eyes as Kaelan.

The spell was worth it, however, as the enraged beast no longer had any targets in sight, and eventually crawled back into the water.

We huddled in the tunnel, emotional and physical wrecks despite not being all that wounded (aside from Kethra). Thankfully a Short Rest cured all of the chaos inflictions, and as we returned to the boat, the voice claimed it would no longer try to thwart us, instead welcoming us for a final showdown.

Next week – we hunt this pesky celestial!