At the bottom level of the mine, Celeste was drawn toward an inhuman fossilized skull. A glowing purple crystal peeked out from beneath its empty eye sockets. Celeste and Trex, the kobold leader, were suffering some kind of mental malady, though whether this skull and crystal were the source or the cure was anyone’s guess.

Seeing the monk in pain, Fray swung her axe at the skull, shattering it and exposing the magic glowing crystal underneath. She snatched the crstyal thinking to protect her friend, but Celeste tried to tackle Fray to grab the crystal.

The two wrestled precariously close to the edge of the bottomless chasm, but Celeste was unable to pin down the squirrely barbarian (and her injured arm didn’t help).

Trex wasn’t sure what was happening, but did reveal that he had a similar story to Celeste, having been found wandering in the snow with no memory of how he got there. And clearly he’s much smarter than the average kobold. He later tried leading his people to a safer place, when he felt drawn toward the mine, but too afraid to go near the skull and crystal as he began suffering headaches.

When Celeste arrived, the pain was nearly unbearable. Fray relented and tried a different strategy, handing the crystal to Celeste after she calmed down. Celeste took it, and instantly all the pain from both her and Trex went away. The crystal was clearly magical, but the party would need to rest before identifying it further.

Valravn was willing to help the kobolds keep their new home in the mine, but one problem remained: a monster somewhere in the mine was hunting kobolds and killing them. They didn’t have much intel on it, only that it was smart enough to pick them off when they were separated, and that it used “stinging whips” to strike.

Fray volunteered as bait to lure the monster out as they trekked up to the second level, into the same room that Smol had fled from the monster earlier (M8). The others remained far back in the tunnels, not even having to roll a stealth check, while Fray sat in the middle of the dark room trying to watch for the beast (15 Perception check).

The grell floated in from the opening of the chasm, successfully striking at Fray with advantage thanks to its stealthy surprise (19 Stealth). Thankfully Fray made the CON save to avoid being paralyzed and poisoned, but she was still grappled and restrained — damn grells are cool! It viciously attacked her with its beak while drawing her toward the chasm and started flying up. Roll for initiative!

Hearing Fray call out, the others had to scramble forward. Fray went first, using her action to try to escape the grell. Even with +3 STR and using Inspiration she was unable to make the DC 15 Escape check, spinning madly in the creatures’ tentacles. Edmond tried to light it up with Faerie Fire but it danced away.

The grell laid into Fray again with tentacles and beak, capping it off with a crit that downed the tiny barbarian as it continued to fly away. Now the party was in real trouble, while the rest scrambled to the edge of the chasm.

Valravn used Fey Touched to Misty Step upward onto the wooden walkway at level one, appearing almost right next to the grell. He pulled out a healing potion and gingerly leaned over the edge to administer it to Fray, reviving her as his action. Celeste attempted to jump and grab the ledge, but failed (once again her injured arm is a nasty setback), while Edmond used Celeste to hoist himself up onto the ledge near Valravn, shooting Magic Stones at the beast.

The party was now effectively split up, with Valravn, Edmond, and Fray on level 1 with the grell (M5) and Thimbleweed and Celeste back on level 2 (M8).

The revived and very angry Fray (suffering the Lingering Injury of Head Trauma) went into a rage and attacked with grell. She used Reckless Attack to negate her disadvantage from being restrained, nothing that the grell had advantage on her anyway (which is about the third fight she’s faced enemies with advantage).

The grell didn’t like its prey hurting it so badly, so it dropped her. Fray used her reaction to grab onto the walkway as the grell attempted to grab Valravan, critically missing both its tentacle and beak attacks! The dice giveth and taketh away.

The grell responded by retreating downward, past level 2 and toward the third level (M10). The dynamic vertical battlefield opened up the options for the grell, forcing the players to move around in unique and memorable ways. 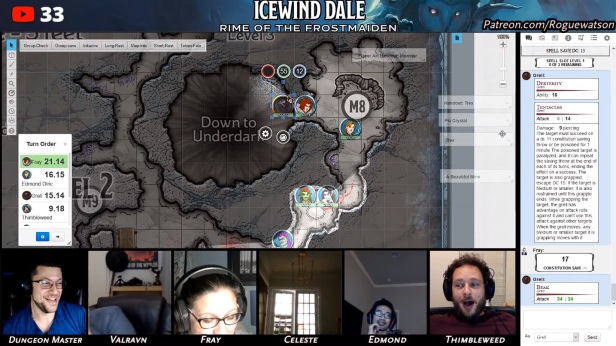 Thimbleweed tied a rope to an arrow and fired on the grell, harpooning it. Celeste tied the rope to her body, and moved backward into the tunnel like an ox pulling a load. Grells are surprisingly strong, but Celeste won the tug of war, pulling it closer to the ledge at the second level (M8).

Fray pulled herself up from the ledge. Still raging and very pissed, she jumped off the ledge, hurtling toward the grell, attacking it with her axe, and landing on the ledge next to Celeste! This was a badass move that I ruled as a disadvantage attack (Reckless Attack negates, though Valravn also shot the grell with Ember’s Lantern, lighting it up like Faerie Fire). She also had to make a DC 10 Acrobatics check to do a superhero pose landing, to avoid falling prone and taking falling damage.

She succeed on both those counts, ripping huge chunks out of the grell. Edmond tried to follow by attempting a similar maneuver, turning his robotic arm into a dagger and leaping off the walkway. He missed his attack, but thankfully was able to grab onto the harpoon rope to avoid sailing into the darkness below. The grell missed a tentacle attack again, but this time tore a nasty bite into the nearby Edmond.

Thimbleweed finished off the grell with another arrow, and Fray was able to reach out a hand to rescue Edmond as it fell into the depths.

The monster had been defeated. The party returned to the kobolds with the good news, and left the mine to report to the Speaker. Before they reached the town, a mob of angry miners were approaching, waving simple weapons. The bloodied and torn Fray effectively frightened and shamed them (CON Intimidation check!), and Valravn used his silver tongue to convince the remaining townsfolk that the kobolds should remain, and could be of help in the mine.

The speaker was pleased with this plan, and doubly happy that the Marshals were able to destroy a significant threat, and work out a peaceful solution with the kobolds. He rewarded them some extra payment, while the party headed to the inn for a much needed Long Rest. During the rest, Celeste identified the crystal as a Psi Crystal, granting her telepathy, and expanding her psionic abilities.

Next week — leveling up to three and making the trip toward Kelvin’s Cairn!

One thought on “Icewind Dale: Rime of the Frostmaiden Session 5 Recap”