Discover the horrors of human experimentation in this mini horror adventure for levels 5-7. 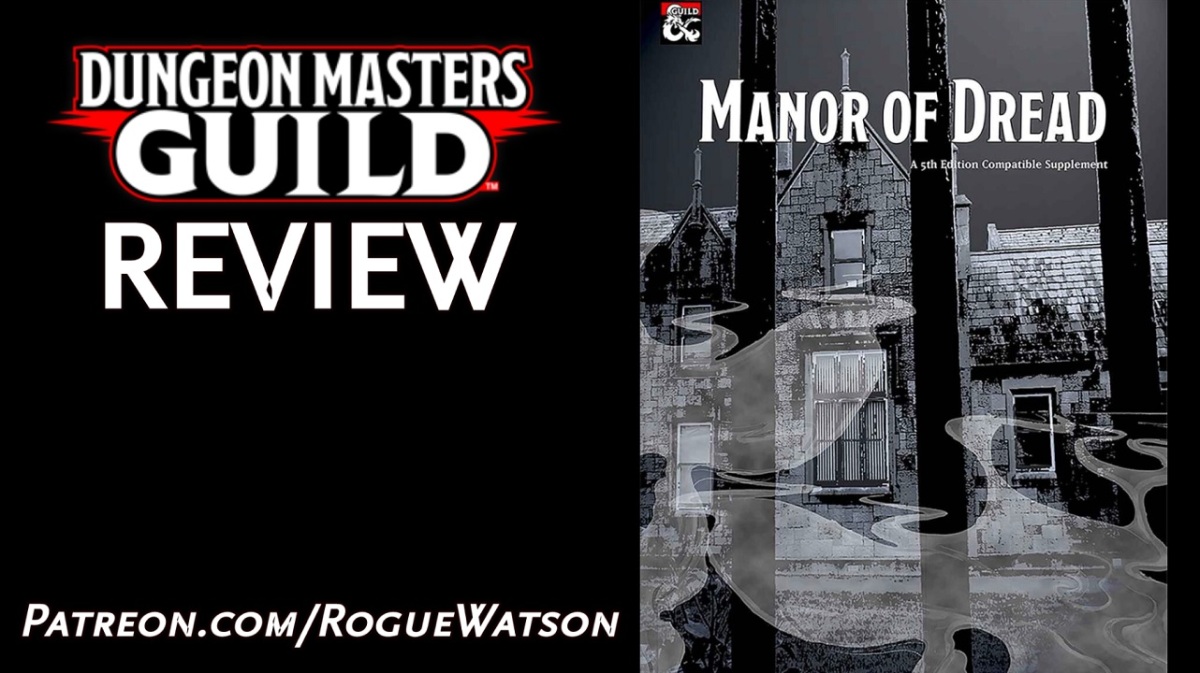 A review copy of “Manor of Dread” was provided by the publisher. Find more DMs Guild Reviews on my website and YouTube channel.

After reviewing Van Richten’s Guide to Ravenloft and its included Horror adventure, “The House of Lament,” it’s starting to fee like Haunted Manor has become its own subgenre of D&D Horror. On one hand Manor of Dread is Yet Another Haunted Manor Adventure, but it also includes a beautiful layout, full color map, and far bigger and more frequent combat encounters than the average haunted house.

Manor of Dread tells the story of Casandra, a wealthy socialite and self-taught wizard with no regard for others or their bodily autonomy. She married and even had a child, but also kidnapped dinner party guests and experimented on their bodies. When the husband became suspicious and plotted to take the baby away, she killed him, and the mists of Ravenloft enveloped the manor.

The adventure takes place entirely within the 14-room, 2-story manor, with simple adventure hooks putting the players on a rescue mission for her latest victim, or simply going in and investigating the creepy place, as adventurers do.

The manor dungeon is designed for five players around level six. Average Party Level adjustments are provided for all the encounters, scaling the adventure between levels 5-7. It’s refreshing seeing a horror adventure that doesn’t mind that the heroes have grown out of the innately scarier lower levels — all the more reason to use some truly terrifying monsters.

While exploring the manor the DM is encouraged to use Haunts in the form of laughter, crying, or door slams — basic horror tropes. Casandra is aware of anyone in her manor but doesn’t actually do anything. She continues her work in her secret attic laboratory, making her an underwhelming adversary.

She does have some powerful minions in the form of her experiments, however. After seeing an illusory body fall in the foyer to its death, the party is free to explore every room of the manor except the Master Bedroom. They’ll need to locate two keys to get past the Anti-Magic locked door.

The keys are in possession of the husband’s collaborators: his brother and the satyr gardener. In an illusory scene in the library we see them take out the hidden keys from a book, but they never made it that far, and were killed by Casandra.

The satyr lies dead in the greenhouse just outside the manor. The party will have to defeat a CR 8 Corpse Flower to retrieve it, while the poor brother was transformed into a Four-Armed Flesh Golem in a second floor bedroom. With both keys in possession they can unlock the bedroom door and hear a crying baby in a crib. It’s a creepy moment that grows creepier when they see the baby is half spider!

Why is Casandra doing this, and what is her obsession with spiders? Why did she spiderize the baby while the others (including the husband in the final boss room) are mere flesh golems? The adventure doesn’t say, nor does it provide any helpful context for the players beyond an illusory dinner party scene that drops a few teases.

Other combat encounters include poltergeists in the kitchen and shadows popping out of a painting in the gallery. Besides the spider-baby there’s only one other really scary non-combat scene that takes place in the guest room. Looking at a mirror causes a creepy face-melting effect that induces madness. Never look at mirrors in a horror setting!

Because of the ratio of scares to fights, and the general passiveness of the enemies, Manor of Dread feels more like a traditional dungeon crawl with some horror elements, rather than a horror adventure. That’s not necessarily a bad thing, however. I love dungeon crawls and action-horror, and this adventure would be easy to run for DMs looking for a more combat-heavy Horror dungeon crawl.

The Verdict: As Haunted MAnor Dungeon Crawl is becoming a well-worn subgenre, Manor of Dread effectively injects some deliciously nasty boss battles amidst the horror.

A review copy of “Manor of Dread” was provided by the publisher. Find more DMs Guild Reviews on my website and YouTube channel.