The Marshals had rescued the first of the fated party who had traveled up the mountain. Garret told a sobering story of a yeti ambush that nearly killed him, and split their party. Our heroes were determined to continue the ascent and discover the fate of the rest of that party.

Note: We’re off next week! The D&D live show will return July 9.

Following the crag cat battle, the party short rested and talked to Garret, the exhausted and injured scout who helped guide the previous adventuring party up the mountain.

Garret told them they had been ambushed by a yeti further up the trail, near a frozen cave, with Garret suffering a nasty wound in the initial attack. The goliath tried to fight it off but was ultimately killed, while the halfling cleric was thrown into the cave.

Much to everyone’s dismay, the wizard who hired this expedition ran off with his bodyguard further up the mountain, while the tielfing warlock chased after him. Garret wasn’t sure of their fates, as he fell down the mountain trail to escape the yeti. He managed to stabilize his wounds but fell unconscious, and was suffering from multiple levels of exhaustion.

Edmond conjured him some alchemical beer, which he was thankful for (inspiration!), and the party left him with his loyal sled dog. Fray, meanwhile, was eager to test her mettle against a yeti, and the rest of the party chased after her up the mountain.

The entire party easily made the DC 10 Athletics check to ascend the perilous series of switchbacks, making it to the outskirts of the frozen cave, home to an entire family of yetis, which our heroes would soon discover.

Fray lit a torch and went inside as Thimbleweed (played by Edmond’s player Raymond) inspected the blood, noting this was the site of the attack Garret described.

In the cave the path split left and right, with a deep chasm plunging down the middle. The left featured a thin sheet of ice as a bridge, while the right held a natural bridge with a semi-recent blood trail. The party opted to go right, with Fray lighting a torch and leading the way.

In the tunnel beyond the chasm they found bones and severed heads, including the remains of Mokingo, the goliath barbarian who had lost his life against the yeti. Fray picked up a magical axe that lie on the ground, and rounded a corner, stopping when she saw a small, child-like yeti batting around an injured but alive halfling.

Fray didn’t waste any time hurling her lit torch into the room. The fire instantly panicked the child and it ran screeching to the end of the cave, where its mother began roaring defensively. Fray ran up to impose herself between the yetis and the halfling, entering a rage for the sole purpose of out angering the yeti (STR Intimidation check versus the Yeti’s WIS).

The result was successful, as the pint-size Fray kept the yeti from charging, and began ushering the halfing to safety.

The rest of the party took up the cue, with Edmond using his telekinesis to nudge the halfling cleric toward the tunnel, Thimbleweed dropping a Fog Cloud, and Celeste using her incredible mobility to run in, scoop up the halfling, and quickly dash back to the bridge.

The yeti was still hostile, however, and not happy with Fray standing right in front of it with its child so close. It tried using its Chilling Gaze, but was no match for Fray’s CON save. It used one of its attacks to hurl a snow glob at the torch, dousing it, and another to attempt to claw at Fray, but failed.

Fray, her rage subsiding, disengaged from the yeti and carefully backed up, still not attacking it. Seems the barbarian has a thing for kids, no matter the species. She successfully backed away from the cave, and the mother didn’t pursue, allowing the party to successfully leave the cave with a grateful halfling.

It wasn’t quite the perfect plan, however, as upon leaving the cave they ran right into daddy yeti, who was very upset at seeing a bunch of people exiting his home. 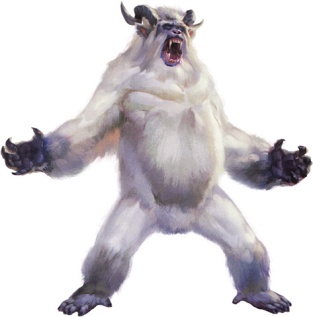 Fray tired to intimidate with her presence once again, but daddy proved his worth by flexing his own STR score. In fact, the party would repeatedly attempt to challenge the yeti on his best stat, between Thimbleweed trying to move it via his swarm, and Edmond trying to shove it with Telekinesis and his own physical strength. The yeti was standing near a cliff’s edge — so just 10 feet of movement would’ve been a major victory, but they couldn’t quite beat its superior strength, and Edmond would go down for it, paralyzed under the monster’s chilling gaze.

Celeste’s Radian Sun Bolt’s found purchase, as did Fray’s axe and Thimbleweed’s arrows, resulting in a bloody victory. Thankfully for them momma never emerged, so they hightailed it out of there, continuing up the mountain with a short rest. Edmond accrued another Lingering Injury but rolled a 20 on the table, resulting in a minor scar — just like Kazin after another yeti fight in a certain giant campaign.

During the rest, Perilou told them how she hid in the chasm from the initial fight (after she was thrown in the cave) but emerged to find the child, who cried out for its mother. She was captured and used as a literal plaything by the little yeti, unable to escape. She was grateful for the rescue, sad about her goliath friend, and wondering what happened to the others.

Fray identified the axe as a Runic Axe, a +1 magic battleaxe I created with four charges. A charge can be expended to activate the two runes, with one granting Darkvision and the other absorbing elemental damage (as per the Absorb Elements spell). I also teased the ability to inscribe more runs on the axe. Perilou explained it belonged to Mokingo and was a special weapon forged by the Akannathi tribe, and they can learn more by seeking out the goliaths here in Icewind Dale.

Upon reaching the summit, the Marshals found the ruins of an old watchtower, with a faded arcane circle in the middle, and the frozen corpse of a tiefling. Perilou was saddened to see her other party member had also died. When Fray went to inspect the body, a gaseous form billowed out of the corpse’s mouth, forming into a Deathlock Wight, which cast Fear on the party.

Fray and Celeste made the save, however, and beat it on Initiative. Celeste punctured it with multiple Radiant Sun Bolts, while Fray cut into it with her new magic axe. The wraith was already at half health (and lost concentration of Fear) when Valravn cast Command, forcing it to kneel. The spell calmed the vengeful spirit, transforming it into the ghostly form of Astrix, the tiefling warlock.

Astrix’s ghost silently projected the scene of her death: her running into the watchtower, trying to get Dzaan to return down to the cave to help her friends. He refusing, committing to casting a spell with the arcane circle, and when she begins casting a spell, he shuts her down completely, paralyzing her.

She watches as he finishes the spell, magically lifting a black crystal into the air as it rotates, sending pings like a sonar detector. When it turns to the northeast it vibrates, causing him to issue an order to his hulking bodyguard, who breaks down a wall of the crumbling tower as he steps outside with a spyglass. He returns, snatches the crystal, and orders another command, as the bodyguard stabs the paralyzed Astrix. They leave as her body falls to the ground, and her spirit inside begins to transform into a vengeful spirit.

With the scene concluded, Valravn promised to avenge her. She embraced him before disappearing (granting inspiration). The Marshals aren’t sure exactly of where the wizard went, but they know he’s involved with the crystals, and certainly willing to murder anyone in his way.

With most of the adventuring party found dead or alive, the party descends back down the mountain with the survivors.

One thought on “Icewind Dale: Rime of the Frostmaiden Session 8 Recap”