After an extra-long, action-packed, story-heavy previous session, this week was a bit quieter as the Marshals arrive in Caer-Konig, meet Speaker Trovus, and learn about a series of thefts.

The party made it down Kelvin’s Cairn without any issue, returning to the base camp with Perilou, and meeting back up with Garret.

The air was growing colder as night was approaching, but Garret suggested they could get push on through to Caer-Konig, the nearest town, before nightfall. Given the destroyed state of the base camp, the party agreed.

Halfway through the four and half mile trek over the rough snow and ice, a pair of icy blue eyes announced the presence of another strange talking animal, this time a snowy hare.

The hare asked similar questions about “the wizard,” but when the party mentioned where he went, the hare grew agitated. It seemed upset that there must be more wizards out there, and kept pressing the confused party for information. When they asked who or what it was, it replied that they were all servants, before bounding off.

Caer-Konig was a much smaller town than the previous towns the Marshals have traveled to, barely holding over a 100 people. Arriving in the evening from over the hills provided little fanfare, and Garret took them straight to his home and place of business at Frozenfar Expeditions to reunite with his husband, Atenas.

Atenas was grateful to see him, and sad that most of their sled dogs had been lost. He also revealed the store had been burglarized recently, thieves making off with weapons and survival supplies, with no sign of entry or sounds.

At this point the Marshals began concocting an elaborate, complex, wacky scheme, where Valravn would play the part of a pompous noble with lots of money, in the hopes of attracting the thief (or thieves) to them. Fray was the only one not in on it, preferring to keep her persona as a Marshal. 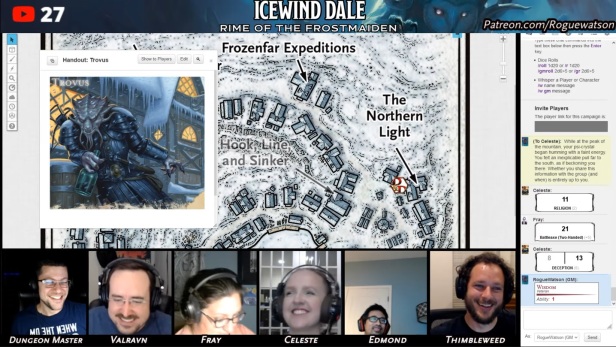 On their way to the Northern Light Inn, the party was accosted by Trovus, the silver dragonborn Speaker of Caer-Konig. He surprised them, waving a half-empty bottle of booze as he accused them of being the thieves. The Marshals, still following their ruse, diffused the situation with the obviously drunk Speaker, who led them toward the inn and explained more of the break-ins, including the recent theft of the magic lantern that hung outside the inn.

Inside the inn the party enjoyed a hot meal and learned more about the town and the break-ins from the hostess Allie. Apparently three places had been hit in as many days: the store, the tavern, and the inn, with no one seeing or hearing anything. Trovus had begun patrolling, but hadn’t found anything (and mostly drinking).

Fray snapped some sense into him by flashing her badge and shoving his face into a bowl of soup, sobering him up. When asked about searching for tracks, he looked sheepish and embarrassed, while the rest of the party continued to play up their deception of Valravn being a rich, exotic noble from a made-up place.

Over in the Hook, Link, and Sinker tavern, Valravn found a place he could perform to an audience, telling stories of his made-up homeland, and hoping to spread the word that he’s an easy target. Fray chatted up the gruff bartender and searched the empty goat pen for clues, but came up short.

Evening had become night, and the party’s long day, which began with journeying toward the mountain, was quickly catching up to them. Fray retired to the inn, while the others decided to awkwardly camp out at the general store, hoping to catch any would-be thieves….

…in a place the thieves already hit. We’ll find out next week if any of their wacky plans(?) pay off!

One thought on “Icewind Dale: Rime of the Frostmaiden Session 9 Recap”